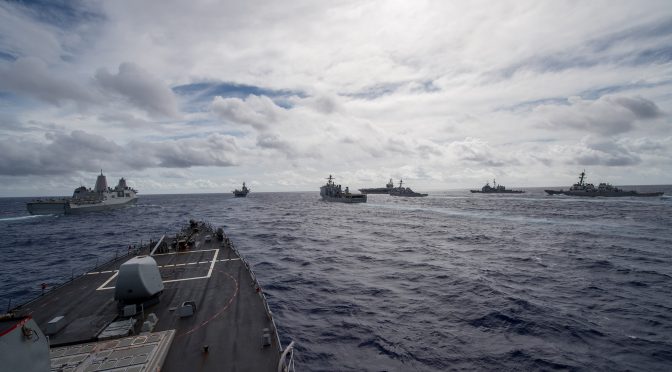 The biggest deficiencies in reformulating the U. S. Navy’s force structure are (1) a failure to take the shrinking defense budget into account which (2) allows every critic or proponent to be like the blind men who formulated their description of an elephant by touching only his trunk, tail, leg, or tusk. To get an appreciation of the size of the problem you have to describe the whole beast, and what is even harder, to get him to change direction by hitting him over the head repeatedly.

A good thesis to make the point is by LT Juan L. Carrasco, published in 2009. It explores the number of fleet billets in (1) the then current 285 ship fleet (2) the proposed, now defunct, 313 ship Navy, and (3) a new fleet of over 650 vessels designed by nine members of the NPS faculty that included more than 260 smaller coastal warships. Carrasco showed, remarkably enough, the NPS-designed fleet required the fewest afloat billets. Looking at the details reveal why. One major reason was that the then-current Navy’s eleven CVNs took 46% of all fleet billets in 285 ship navy, so when the NPS-designed fleet cut the number of CVNs to six and added more than a dozen small sea-based air platforms, then they were more distributable 100,000 ton carriers. The smaller ones, more like a CVL in size, can operate in littoral waters where a CVN wing is more than is needed for long term littoral operations. Thus, there were enough billets to more widely distribute across the NPS fleet.

A Manpower Comparison of Three U. S. Navies: The Current Fleet, a Projected 313 Ship Fleet, and a More Distributed Bimodal Alternative by Juan L. Carrasco.

Those who haven’t thought about all the elements of a 600-ship navy will have a lot of questions about logistics, flying off smaller carriers, new tactics to accompany the new technologies, procedures to deal with warships damaged from missile attacks, and so forth. The Navy must confront its budget crunch while needing to buy more expensive missiles in greater numbers, restoring the SSBN fleet, sustaining the APN dollars to buy ever-more expensive aircraft, supporting Marine expeditionary operations, structuring an offensively capable surface ship fleet, building up—or merely sustaining—our increasingly valuable submarine forces, and maintaining enough CLF ships to take some losses and continue to maintain the fleet forward. This will take a lot more original thinking about the role of unmanned and robotic vehicles of many kinds, more teaming with partner nations, forward bases that support our friends in East Asia and Europe, applications of offensive cyber warfare, achieving more stealthy C2 ways to attack effectively first, all to achieve the end of building a more distributable, combat ready 21st Century U. S. Navy.

Captain Hughes is a designated professor in the Department of Operations Research at the Naval Postgraduate School, Monterey, California. He is a graduate of the U.S. Naval Academy and holds a master of science degree in operations research from the Naval Postgraduate School. On active duty he commanded a minesweeper and a destroyer, directed a large training command, served as deputy director of Systems Analysis (OP-96), and was aide to Under Secretary of the Navy R. James Woolsey. At the Naval Postgraduate School for twenty-six years, he has served in the Chair of Applied Systems Analysis, as the first incumbent of the Chair of Tactical Analysis, and as dean of the Graduate School of Operational and Information Sciences. Captain Hughes is author of Fleet Tactics and Coastal Combat (2000), Fleet Tactics: Theory and Practice (1986), and Military Modeling (1984), and he is a coauthor of A Concise Theory of Combat (1997). He served as a member of the Naval War College Press Advisory Board for over twenty-five years, until 2012.