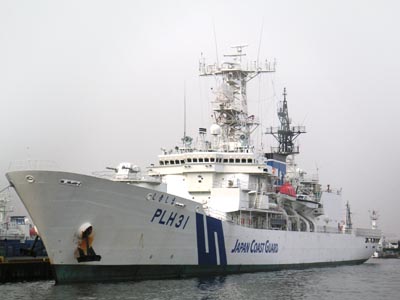 Since its formation in 2013 by the consolidation of four previously independent agencies into a single entity (notably excluding the SAR agency), the Chinese Coast Guard has been experiencing phenomenal growth and has become China’s instrument of choice in its “small stick diplomacy” push to claim most of both the South China Sea and the East China Sea.
They commissioned two 4,000 cutters in January alone. It appears the growth will continue. The Wuchang Shipbuilding Industry Company has just been awarded a contract for four new 5,000 ton cutters, and China Ship-building Industry Corporation has been contracted to build two additional surveillance ships, one of 10,000 tons and another of 4,000-tons.
The US Coast Guard’s largest patrol cutters are the 418 foot, 4,500 ton full load Bertholf Class National Security Cutters. The illustration that accompanies the story of the four new 5,000 ton cutters shows a ship, in many ways similar to the National Security Cutter. It appears there is a medium caliber gun on the bow. (This would be a significant but not unexpected change for the Chinese Coast Guard.) There is a frame over what appears to be a stern ramp not unlike that on the NSC. The hull shape also appears similar to the NSC.

The “10,000 ton” cutter is likely to look similar to the Japanese Coast Guard’s two 492 foot, 9,350 full load, Shikishima class high endurance helicopter carrying cutters seen in the illustration above, but they may actually be much larger. Comparing their new ship to the Japanese cutters, the displacement of the Japanese ships was quoted as 6,500 tons, their light displacement. If the 10,000 tons quoted for the Chinese cutter is also light displacement, it could approach 15,000 tons full load. As reported here the new Chinese OPV will have a 76mm gun, two 30mm guns, facilities to support two Z-8 helicopters, and a top speed of 25 knots.

The size of the helicopters is notable. The Z-8 is a large, three engine, 13,000 kg helicopter based on the Aérospatiale SA 321 Super Frelon. The transport version of this helicopter can transport 38 fully equipped troops. The same airframe is also used for SAR, ASW, and vertical replenishment.
Undoubtedly the new vessels tonnage would give it an advantage in any sort of “shoving match” with vessels of other coast guards, but why so large?
The original justification for the Japanese cutters was to escort plutonium shipments between Japan and Europe, but the second cutter was built long after that operation was suspended, so clearly the Japanese saw a different justification for the second ship of the class.
Even so the Chinese ship may prove larger still. Other than prestige, why so large? China’s EEZ is small (877,019 sq km) compared to that of the US (11,351,000 sq km) or even Japan (4,479,358 sq km). Even adding the EEZ of Taiwan and other areas claimed by China, but disputed by others (3,000,000 sq km), the total is only about 3,877,019 sq km, and patrolling it does not require the long transits involved in patrolling the US or even the Japanese EEZ.
10,000 tons is about the size of a WWII attack transport, and with its potential to embark two large helicopters, China’s new large cutter could certainly exceeds the capability of WWII destroyer and destroyer escort based fast transports (APD). Using its helicopters and boats it could quickly land at least an infantry company, as could many of the smaller cutters. Chinese Coast Guard ships are already a common sight throughout the contested areas of the South China and East China Seas. Will Asia wake up some morning to learn there have been Chinese garrisons landed throughout the contested areas, by the now all too familiar Chinese Coast Guard Cutters.
Chuck Hill blogs at http://chuckhillscgblog.net/. He retired from the Coast Guard after 22 years service. Assignments included four ships, Rescue Coordination Center New Orleans, CG HQ, Fleet Training Group San Diego, Naval War College, and Maritime Defense Zone Pacific/Pacific Area Ops/Readiness/Plans. Along the way he became the first Coast Guard officer to complete the Tactical Action Officer (TAO) course and also completed the Naval Control of Shipping course. He has had a life long interest in naval ships and history.