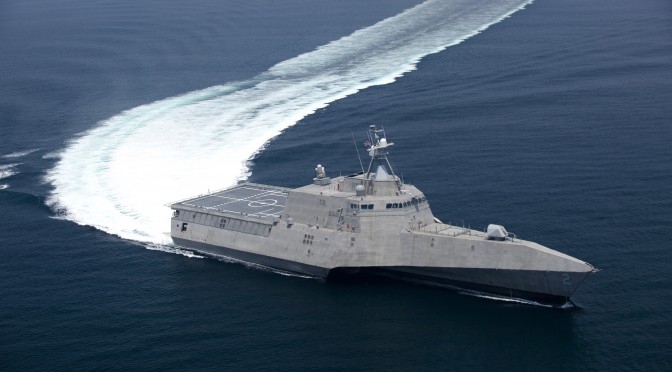 BEIJING – The U.S. Chief of Naval Operations (CNO) and the Commander-in-Chief of the Chinese People’s Liberation Army Navy (PLAN) signed a ten-year fixed-price contract Monday that bars China from attacking the Littoral Combat Ship (LCS) in the event of hostilities.

“This contract makes enormous sense operationally and fiscally,” stated the CNO in a press conference following the signing. “We’ll be procuring at least 24-32 LCS, yet it’s well known that LCS isn’t survivable in a shooting war. The challenge was how to address this gap in our CONOPS in an affordable manner.”

“The contracting department at Naval Sea Systems Command (NAVSEA) came up with an innovative and cost-effective solution: rather than trying to ‘fix’ LCS, we pay the Chinese a flat $50 million per hull through 2024 to just kind of ignore the LCS for the first week of a war [between the US and China],” said the CNO. “That should be enough time for a forward-deployed LCS to steam back to San Diego – assuming the typical breakdown rates we’ve seen on recent deployments,” he added.

“I look at it as an insurance policy. If we keep five LCS forward-deployed in the Pacific, the contract will cost the taxpayer about $250 million—a fraction of what we’ve spent developing and acquiring LCS to date, let alone what we’ll spend on hull modifications and yet-to-be-delivered mission modules. It’s a win-win scenario for everyone: industry can keep building new LCS hulls; Congress garners support from the shipbuilders; Navy keeps overall fleet numbers up; and NAVSEA gets another decade to try to make LCS into a warship,” stated the CNO.

Support for this contract among the LCS community has been strong.  “Whew! Not having to worry about Phase 2 military operations is a big relief,” wrote Cmdr. John Hansen, the commanding officer of USS Freedom (LCS-1) Gold Crew in an email.

“Most of my crew are only getting four hours of sleep per night,” said Hansen. “We spend all our time plugging leaks, fixing engine malfunctions, logging casualty reports, removing rust and repainting, and arranging emergency port visits. It’s nice to know that if a swarm of Chinese Houbei missile boats comes bearing down on me, I’ve got a legally-binding contract which stops them from firing their C-802 [missiles.]”

China also stands to benefit from the contract—and not just financially. “Destroying an LCS would not have been much of a challenge,” said the PLAN Commander-in-Chief. “I mean just look at the thing. In fact, it’s such a lop-sided match-up that my ship captains were starting to feel a bit puzzled and insecure. I’d get emails from them saying ‘What are the Americans up to with LCS? Don’t they respect our capabilities?'” he sighed. “But with this contract in place, I can tell my captains that you Americans do respect our capabilities – which does wonders for our self-esteem.”

The Navy is expected to propose similar contracts to Iran and North Korea.

Matt Cosner is a former P-3 naval flight officer now flying a non-descript cubicle deep in the heart of southern Maryland.  The opinions expressed in this article do not reflect those of the Department of Defense or Department of Navy and probably shouldn’t be taken seriously by anybody…except on LCS.