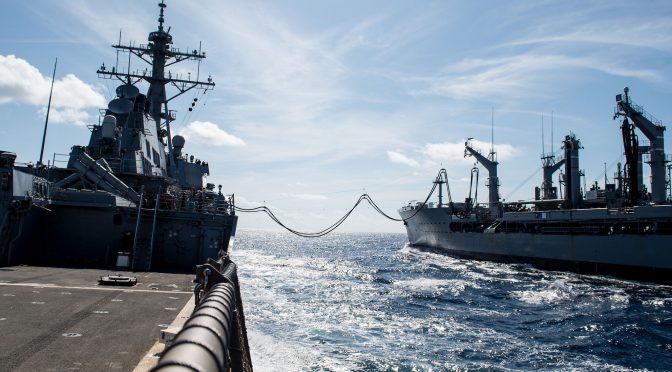 The days of majestic leviathans harnessing the power of the elements for propulsion to cruise the world’s navigable waters are long past. What has evolved are voracious beasts which tear across the world with little concern for all but the largest of wind and wave. The appetite of the engines that propel these vessels can only be satiated by a routine supply of petroleum. The United States Navy has established a global logistics network to feed this hunger, the backbone of which is a fleet of tankers, manned by the merchant mariners of the Military Sealift Command (MSC). Hand in hand with the ability to refuel the Navy’s ships is the ability to send fresh food, replacement parts, and ammunition to surface assets without the need to have them return to domestic ports and safe havens. This steady stream of supplies allows the United States to project power around the world. Given the importance of our MSC fleet, they will likely be a priority target in the opening stages of a conflict against a near-peer adversary. Given their vulnerability, these vessels will be faced with the prospect of withdrawing from the area of responsibility (AOR) or being sunk. Whatever the outcome, the cruisers, destroyers, and littoral combat ships at the tip of the spear will retain the requirement of contesting the battlefield until sufficient forces arrive in theater to relieve them. How then to supply these vessels and ensure they have what they need to do what is demanded of them? This paper seeks to address this concern and provide a possible solution to the disruption of our supply chain in the Western Pacific.

One possible solution harkens back to the late 19th century, when nations desiring to project naval power around the world were confronted with a need for coaling stations to support their relatively short legged ships. The 21st century Navy, borrowing from this concept, could build a series of logistics hubs throughout the Western Pacific. These miniature logistics hubs could be built in small inlets, coves, and atolls – anywhere with sufficient draft to support our surface assets. They would function as temporary sanctuaries where thirsty ships could quickly gas up and resupply before turning around and returning to the fight. The infrastructure required to support this concept need not be excessive. A small tug, a fuel barge, and the personnel to man them would be the extent of the investment.

Depending on the potential threat (largely driven by its proximity of an adversary’s weapons systems, or lack thereof), the Navy could expand beyond the aforementioned bare necessities to provide additional support to its vessels. A runway could be constructed to allow for replacement ordnance or repair teams to be flown in.  To complement this, cranes could be prepositioned to support reloading of expended VLS cells. Any combination of support equipment could be staged to support rapid augmentation via air during wartime. Indeed, if we were feeling particularly ambitious, we could use these locations to facilitate the forward repair of battle damage, using vessels like the USNS Frank Cable (AS-40) with their extensive machine shops to establish floating forward repair facilities.

There are several advantages that such outposts offer our frontline commanders.  First and foremost is that, in a scenario where our logistics ships are driven off, sunk, or otherwise unavailable, the captains fighting their ships would have multiple locations to replenish and get back into the fight. This would facilitate greater time on station which is crucial to maintaining their ability to shape the conflict, contest the battle space, and disrupt an adversary’s plan.

Secondly, these dispersed outposts would allow for fixed locations to refuel. In a degraded C2 environment, this is no small consideration when the ship in question may not have the ability to locate, communicate with, or sufficient endurance to reach surviving oilers. By dispersing potential resupply locations across a greater expanse, we inherently complicate potential adversaries ISR and force distribution calculations. No longer could it be assumed that naval vessels will be taking the most direct route to or from Guam, Japan, Singapore, or the Philippines. Instead, the foe must now picket additional lines of approach and disperse limited assets.

It is a very different tactical problem to protect widely dispersed oilers with a handful of assets than those steaming in company with a strike group. If our logistics ships are to survive in an increasingly lethal anti-access/area-denial (A2AD) environment, they will require an escort to provide sensor and kinetic coverage, primarily from hostile airborne and subsurface threats. This coverage will necessarily be supplied by large surface combatants. This coverage would likely require a one to one matchup between these – the shepherds – and their quarry. Freeing them of the need to ride herd on our logistics (at least until they initially transit out of the theater) will make them available for other tasking.

There are a host of questions to consider, one of which is the sustainability of these stations. Operating upon the high seas takes a heavy toll upon equipment, which requires a great deal of maintenance to remain operational. These outposts would require personnel to ensure the airfields are capable of supporting aircraft, the cranes of swinging VLS cells, and the pumps of pushing fuel. Exact expenditure and allocation of personnel would need to be worked out on a case by case basis. The current U.S. Army facilities on Kwajalein in the Marshall Islands provide a possible blueprint for use elsewhere. The island possesses a harbor, tug, fuel barge, and runway, which do not require burdensome manning. Additional requirements would necessarily be subject to further study.

Another question which merits consideration is the diplomatic expenditures necessary to enable the placement of these logistics hubs. Should the United States construct these facilities on the territory of regional partners or should it seek to, like the People’s Republic of China, improve upon maritime features scattered throughout the Pacific? Both lines of approach have inherent hurdles. Establishing them on the territory of another nation will require a greater initial investment of political capital and defining legal framework to permit their existence. Building upon unclaimed maritime features risks a charge of hypocrisy against the United States relative to its stance on the Spratly Islands, though this could largely be mitigated through a decision to forego claiming a surrounding exclusive economic zone. Ultimately, some combination of the two may ultimately prove desirable.

A third matter that should be addressed is that of targeting by long range weapons of an adversary. The proposed logistics hubs, like their seaborne counterparts, would be prime targets in the opening hours of a conflict while, unlike their counterparts, they would be unable to dodge. How then to prevent them from being anything other than a target or a drain of resources? There are two potential paths to their salvation. The first draws from the Russian concept of maskirovka, or military deception. Given the pervasiveness of satellite imagery, it will be difficult to actually hide the locations, making it necessary to convince an adversary that they serve a different purpose. They will be far less likely to waste precious missiles on a naval construction battalion facility or medical facility than a place to replenish a warship. The other path, for those facilities which would be emplaced on foreign territory, would be the protection afforded by the sovereignty of that nation. Potential adversaries may not want to draw unnecessary third parties (such as the Philippines or Japan) into a conflict with the United States by lobbing missiles at their territory, especially if the third parties are not obligated to join the United States.

George Patton once quipped, “fixed fortifications are monuments to man’s stupidity.”  This paper does not advocate turning these proposed positions into heavily manned bastions. Rather, their physical security would be derived from geographic remoteness and light covering forces such as Patriot batteries and Naval Expeditionary Combat Command detachments. This paper also does not seek to posit that our MSC fleet lacks utility; indeed, it is quite the opposite. Those ships are the defining variable in determining not only whether we can emerge victorious from a prolonged conflict, but whether we can simultaneously support our global commitments.

This paper offers an alternative means to supply our fleet in the opening stages of a conflict against a near-peer adversary who is capable of tracking and targeting our logistic ships at great distances. If we have sufficient forces in theater to meet mission obligations and protect our logistics ships, then there is no harm in having built up such a capability.  If, however, our opponent has denied these vessels the ability to safely operate where they are most needed, then such a low-cost investment may prove decisive in allowing our ships to hold the enemy at risk. Let us not forget that if she runs out of gas, no amount of advanced sensors or weapons will prevent a ship from being anything more than a target.

LTJG Elee Wakim is a Surface Warfare Officer in the United States Navy.  He is currently stationed in Singapore with the Maritime Staff Element of Destroyer Squadron SEVEN.  The views expressed here are his own and do not represent those of the United States Department of Defense or any other organization.

5 thoughts on “Beans, Bullets, and Benzene: A Proposal for Distributing Logistics”