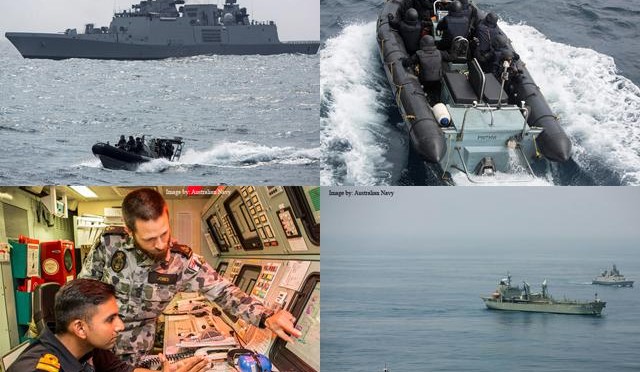 This publication originally featured at the National Maritime Foundation, and was republished with permission. It can be found in its original form here.

In mid-September 2015, Australia and India held their first-ever bilateral naval exercise, AUSINDEX-2015. The week-long exercise was held in the Bay of Bengal, and involved five warships, an Australian submarine and two long-range anti-submarine aircraft (Australian P3C and Indian P8I). A “pronounced emphasis” of the exercise was on anti-submarine warfare (ASW). Beyond merely being ‘just another combined exercise’, it bears a far-reaching import, and highlights Australia’s national-strategic reorientation in recent years.

Until a few years ago, it was commonly said that ‘Australia and India are divided by the Indian Ocean’, which had an element of truth. Traditionally, Australia’s national security strategy has been characterised by a combination of a ‘maritime citadel’ and ‘Pacific-oriented’ approach. The former is best exemplified by Australia’s promulgation of a 1,000 nautical-mile ‘Maritime Identification Zone’ (MIZ) in 2004. While such an approach was considered necessary for Canberra to counter the seaward incursions by foreigners, it led to a perception of Australia’s ‘exclusivity’. 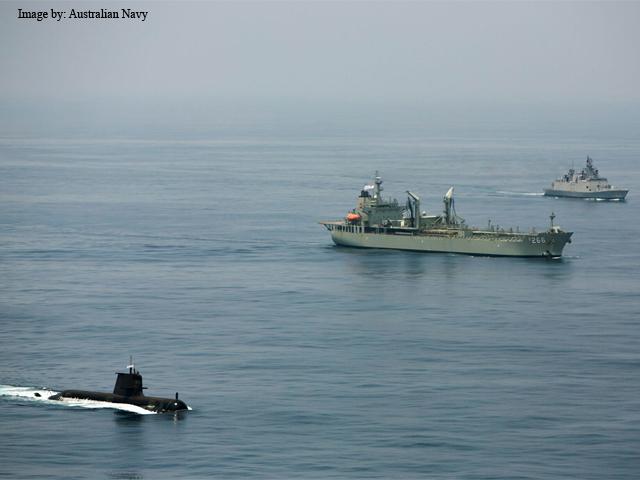 The Pacific-oriented prong of Australia’s approach entailed its strategic focus towards the southwest Pacific, where the island countries have been prone to political instability. Such instability could spill-over into Australia in various forms, thereby impinging on its national security. Notably, most of Australia’s developed cities lie on the eastern side facing the southwest Pacific, making it highly vulnerable to destabilising events in its eastern maritime neighbourhood.

Australian defence forces have often contributed to coalition operations in the western end of the Indian Ocean, such as in Afghanistan and the Gulf of Aden (counter-piracy). However, these were driven by Australia’s need to fulfill its alliances and international commitments, rather than being ‘directly’ linked to its security interests.

In the past, Australia’s traditional approach may have been adequate to secure its national security interests. However, Canberra seems to have realised that the emerging regional environment has made it unviable in present times. An inward-looking strategic orientation has also been unhelpful for Australia to develop multifaceted engagements with the Asian countries, including in terms of responding to the vulnerabilities of the maritime realm and strengthening trade ties.  In particular, Australia needs to expand its maritime security perimeter to be able to achieve situational awareness in distant waters, besides ‘influencing’ and ‘managing’ developments therein.

For Australia, whose strategic orientation has traditionally been encapsulated in the concept of Asia-Pacific, its re-orientation towards the Indian Ocean is relatively recent, and is evidenced in the conceptualisation of the “Indo-Pacific” region in its National Security Strategy (January 2013) and Defence White Paper (May 2013). Although the term ‘Indo-Pacific’ as often appeared as a geographic entity in the lexicon of Australian policymakers and analysts in the past, its formal articulation as a “new strategic construct” appears for the first time in these documents of 2013.

Where India Fits In?

Notwithstanding its sensitivities stroked by the Indian nuclear tests of 1998, Australia could not keep itself estranged from India for long. Naval cooperation was a natural choice to begin the engagement; in 2003, Australia began its participation in the Indian Navy’s biennial Milan (congregation) of regional navies at Port Blair. It also participated in the five-nation Malabar-2007 exercise in the Bay of Bengal, which caused worries in China. In the following years, India sent observers to the Australia-hosted Dugong (2009) and Kakadu (2010) naval exercises. 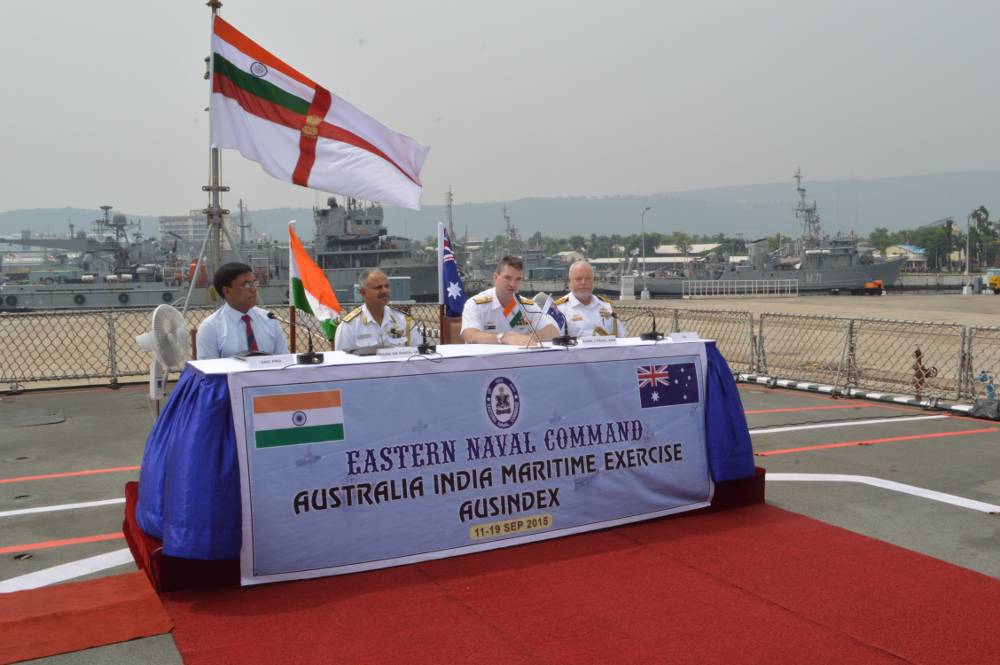 Australia and India have already established an information-sharing mechanism on ‘white shipping.’ By contributing to Maritime Domain Awareness (MDA) and Search and Rescue (SAR), India could mitigate Australia’s primary concern of illegal immigration across the Indian Ocean. Although Canberra has been troubled since long by migrants from Southeast Asia, in more recent times, Sri Lankan Tamils and Rohingyas have also been trying to migrate to Australia in large numbers.

Undeniably, Australia is seeking partners in the Indo-Pacific region to ride the crest of ‘rising Asia.’ The salience of China is an economic powerhouse of the world is not lost to Australia. Hence, notwithstanding its alliance with the United States and its wariness about the rapid growth and disposition of China’s military power, relations with Beijing will be important to Australia.

Nevertheless, it is instructive to note that Australia’s 2013 National Security Strategy calls China “our key economic partner”, whereas it calls India “our Strategic Partner.” The essence is that as Australia develops its economic ties with China , it needs India and other regional powers as a hedge against possible scenarios involving China that could be inimical to its national security interests. Ostensibly, the need to build strategic deterrence against China is a major driver for Australia’s keenness to join the Malabar-2015 naval exercise involving India, Japan and the US. 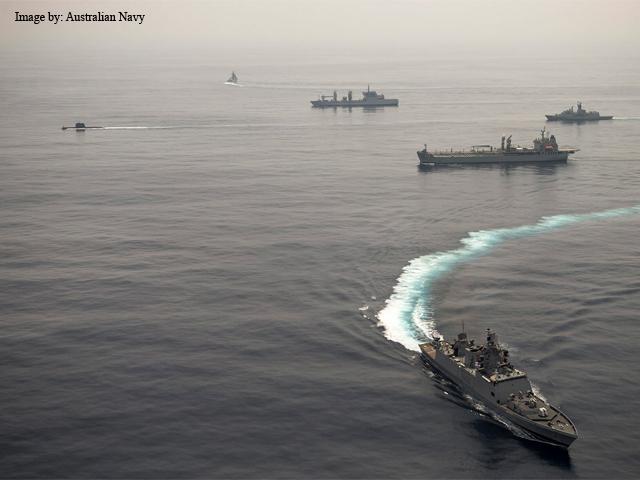 The PLA Navy’s submarine visits to Colombo (September-October 2014) and Karachi (March-May 2015) are likely to increase in future, and involve nuclear submarines. Neither Canberra nor New Delhi draws comfort from unannounced forays of such stealth platforms in their maritime zones. For India, a partnership with Australia could check China’s possible politico-military assertiveness in the Indian Ocean.

Notwithstanding, New Delhi will need to be cautious in any partnership with Canberra involving other major powers, so as not to send misleading signals to Beijing, for instance, on the prospects of ‘Asian-NATO’ that emerged during Malabar 2007. For Delhi, therefore, the biennial AUSINDEX was a deft move to engage with Australia bilaterally, rather than under the multi-nation format of Malabar.

While AUSINDEX-2015 as a seminal event does not by itself herald the evolution of Australia’s strategic reorientation, it does portent to be a bellwether for its enhanced maritime security cooperation with India. Possibly, in the coming years, the Indian Ocean will be more of a ‘bridge’ rather than a ‘barrier’ between Australia and India.

Captain Gurpreet S Khurana, PhD is the Executive Director, National Maritime Foundation (NMF), New Delhi. The views expressed are his own and do not reflect the official policy or position of the Indian Navy, the NMF or the Government of India. He can be reached at gurpreet.bulbul@gmail.com.