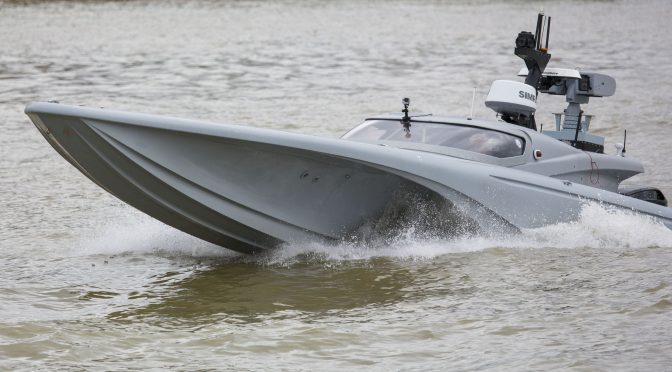 Current incidents in the Arabian Sea should be seized as an opportunity to advance naval conceptual thinking about unmanned maritime systems in gray zone operations. Gray zone activities are an astute object for concept development, as they “creep up on their goals gradually,” rather than involving decisive moves, as Michael Mazarr has argued. In response, Mazarr contends, gray zone operations will “call for a greater emphasis on innovation” as these operations take different forms and intensities and thus require varied responses. This coincides with the general need to devote more attention to concepts development that drives the use of new naval technologies such as unmanned systems.

Maritime stability in the Arabian Sea has deteriorated significantly over the past couple of weeks. In response to the Iranian seizure of the Stena Imperio, a Swedish oil tanker under British flag, London reached out to different European capitals in view of establishing a maritime protection mission escorting commercial vessels through the Strait of Hormuz.

This incident and prior events in the Arabian Sea such as harassing commercial vessels with speedboats and assaults on commercial vessels are a perfect illustration of so-called gray zone activities. Located between war and peace, gray zone activities involve “coercive actions to change the status quo below a threshold that, in most cases, would prompt a conventional military response,” as Lyle J. Morris and others have suggested.

These activities raise an obvious question: How best to respond? Staying out of the region for an interim period, as the British government has advised U.K. shipping, has been interpreted as a watershed moment “when the UK admits it can no longer protect its merchant vessels.” But even if political support for the maritime protection mission matured, the question would remain if there were enough adequate platforms to do the job.

Deploying big capital ships or surface combatants to escort merchant vessels might send a strong message of resolve to Iran, but doubts remain if this approach is adequate. Past experiences in the Arabian Sea have made it clear that naval vessels remain vulnerable to speedboats operating at a high tempo in distributed maneuver operations. While this is certainly only one method of attack, it is most important for strategic communication. Small boats successfully attacking or deterring prestigious naval ships delivers a message that all gray zone actors want to convey.

It is time to supply navies with an additional option using unmanned systems. Unmanned maritime systems (UMS) have been developed and used for quite some time, but right now, the majority of unmanned maritime systems are used for mine countermeasures. There is an obvious operational need to do the job, concepts of operations are in place, and technology is mature. This makes a perfect fit, but more can be done.

Unlike gray zone activities in the South China Sea that involve the building of artificial islands to underline sovereignty claims and the use of naval militia and the coast guard to intimidate neighbors, Iran’s actions are of a different quality. In the Arabian Sea, mosaic defense emphasizes mass, speed, and surprise. Unmanned maritime systems would be ideal to respond because they can be built to be lost. This levels out current asymmetries between speed boats and big capital ships and denies the adversary the offensive on strategic communications. This attrition-like role is only one mission UMS could play in future maritime protection missions. Overall, the mission envelope could be much broader.

First, assuming that a maritime protection mission depends on persistent situational awareness and understanding, unmanned systems can be used to collect intelligence and provide reconnaissance. For this mission the emphasis should be on closing the sensor chain from seabed activities through the undersea world to the sea surface into airspace and space. In all of these domains unmanned systems are already in use, but more needs to be done to fuse data to augment the existing Recognized Maritime Pictures (RMP), for example to detect anomalies stemming from adversarial behavior at sea.

Second, unmanned systems at sea can push the defense perimeter out. Forward deployed unmanned surface vehicles (USV) could be used to intimidate an adversary’s embarking speed boat fleet thus delaying the launch of operations and creating “noise” that would send alarms to the RMP. A more wicked though not yet technically mature option would focus on very small, mine-like unmanned underwater vehicles (UUV). These assets could be deployed covertly by submarines or by air assets. These UUV could turn into a sort of adhesive explosives that stick to boats running over them, thus rendering them dysfunctional.

Third, unmanned maritime systems could be used for deception operations. A swarm of USV could enter a theater of operation disguised as a big capital ship on the adversary’s sensors. As the adversary prepares to counter the ship the USV swarm would disperse into many different smaller platforms thus out tricking the adversarial defense posture. A similar mission can be envisaged for the underwater domain where UUV are already used to imitate the signature of submarines.

Fourth, USVs could constitute the outer ring of maritime protection missions. Robust platforms could be equipped with remote-controlled weapon stations, like the Protector USV developed by Rafael Advanced Systems, to engage incoming speed boats or flying platforms. In addition, USV could be used to deploy electronic counter-measures, for example, to jam adversarial sensors and take out communications between unmanned aerial assets and the respective control units.

While some of these ideas are closer to reality than others, what matters most is that concepts and operational requirements need to drive the use of unmanned maritime systems in gray zone operations. So far, the discussion about UMS mainly focuses on providing solutions to meet the needs that emerge in naval warfare areas such as mine countermeasures, anti-submarine warfare, or anti-surface warfare. However, gray zone activities cut across all of these tasks. Adequate responses need to adopt a more horizontal approach, as well looking at the technological building blocks that can be used for all missions. Here, the most recent decision of Belgium and the Netherlands to develop a toolbox of unmanned systems for mine-countermeasures shows the way to the future. This approach could be turned into a holistic concept to deal with UMS for maritime gray zone activities.

Putting extra emphasis on innovation and concepts development also opens up avenues for fruitful cooperation with the Gulf states that step up efforts to expand their own naval capabilities while at the same time ramping up efforts to establish a local naval industrial base. Involving them from the start would make sure that specific regional requirements could be adequately addressed while at the same time contributing toward building up local technology expertise in important  areas and incentivizing the establishment of local capabilities and concepts. In the long run this joint approach could help shoulder the burden to provide maritime stability in one of the world’s most pivotal regions.