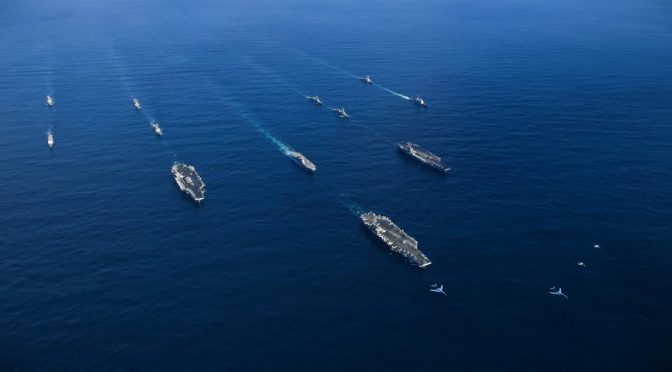 The recently released U.S. National Security Strategy (NSS) and National Defense Strategy (NDS) have major implications for maritime security. In December 2017, the Trump Administration released its first National Security Strategy and a month afterward, the Department of Defense released its nested National Defense Strategy. Per U.S. military doctrine, the NSS provides a broad strategic context for employing military capabilities in concert with other instruments of national power and addresses tasks that are necessary to provide enduring security for the American people and shape the global environment.1 The NDS outlines the Department of Defense’s approach to implementing the President’s NSS. Both signify a significant change of focus while also confirming the traditional American approach to security. During the implementation of these strategies, the maritime environment plays a prominent role in addressing security concerns for the foreseeable future.

A few years ago, there was considerable ambiguity identifying the greatest security threat facing the United States. ISIS had emerged as a serious force in the middle east, and U.S. and allied forces faced setbacks in Afghanistan. The threat of violent extremist organizations, especially radical Islamic ones, appeared to most significantly affect future security interests of the United States. In 2015, a Gallop poll indicated that 84 percent of Americans considered both ISIS and international terrorism to be critical threats to vital U.S. interests, while only 49 percent considered the military power of Russia and only 40 percent considered the economic power of China to be critical threats.2 The maritime environment plays a relatively minor role in addressing the terrorist threat, and it appeared that the main focus of effort would be on terrorists rather than conventional, state actors.

Following a dramatic period witnessing the collapse of ISIS along with increasingly aggressive actions by China and Russia, the National Security Strategy (NSS) mentions the challenge of China and Russia first in its description of the present competitive world, and warns of the return of great power competition. Likewise, the National Defense Strategy declares upfront that “Inter-state strategic competition, not terrorism is now the primary concern in U.S. national security.” There is a renewed emphasis to deter or defeat major powers which will greatly increase attention for maritime security.

Long-term strategic competition from China and Russia is profoundly more threatening to maritime security compared to the threat of non-state terrorists. The ability of either or both major powers to impede sea lines of communication in the event of an armed conflict is an alarming concern. One of the missions of the U.S. Navy – to maintain freedom of the seas – would be critically challenged in a great power conflict. According to Alfred Thayer Mahan, the primary purpose of a Navy is to secure command of the seas so that another navy is unable to disrupt that nation’s sea commerce. Mahan argues that a navy should secure command of the seas by destroying the enemy navy.3 Mahan’s theories continue to influence U.S. Navy policy today, as apparent in the U.S. Navy’s Design for Maritime Superiority and Future Navy documents. Analytical studies, war games, and conferences will increasingly feature potential conflict in the maritime environment by addressing the potential of one navy to destroy another in a contest to secure or sever sea lines of communication.

The NSS calls for the military to remain pre-eminent and to retain over-match, the combination of capabilities in sufficient scale to prevent enemy success. This continues a longstanding tradition of U.S. foreign policy as recently summarized by Dr. Thomas Mahnken in his contribution to the journal by the Asian Bureau of National Research.4 Mahnken states that in practice, U.S. grand strategy and national military strategy have been remarkably consistent over the past 70 years, with a military strategy of power projection underpinning a grand strategy of global primacy. The NSS and NDS continue this strategy, notwithstanding the recommendations of some academic scholars to abandon this approach.

Dr. Barry Posen is one such scholar who has argued against prioritization of military power, instead advocating a grand strategy of Restraint which would pursue a cautious balance-of-power strategy and use military power sparingly.5 Initially encouraged by Donald Trump’s remarks on the campaign trail indicating that as president, he might withdraw from alliances and play a less prominent (and expensive) role in the world order, Posen was surprised and disappointed that Trump’s grand strategy turned into a continuation of what he considered an overly expensive, hegemonic security policy, although with more illiberal characteristics.6

Posen overstates the characterization of the Trump administration’s policies, which fundamentally still adhere to liberal international principles, especially compared to other, truly illiberal regimes. He underestimated the durability of the U.S. foreign policy establishment and its effectiveness in convincing a new President to adopt an approach quite different from what was discussed during the campaign. The NSS and NDS firmly refute the suitability of Restraint in addressing contemporary security dilemmas. Despite the problems of military primacy and maintaining overmatch, these policies have been decided to be better than the alternatives with respect to reorienting toward great power competition. It is important to make this distinction and to understand how significant the rejection of Posen’s concepts is, for this will be the path of U.S. strategy for the foreseeable future.

The National Defense Strategy asserts that war between great powers is possible and increasingly likely unless the United States can maintain a favorable balance of power. Rivalry among maritime forces will be a crucial element in this balance of power as the United States strives to maintain military primacy. The rate of procurement and modernization among global naval forces, especially between the United States and China, will be scrutinized. Military future force planning goals such as a 355-ship navy are actively discussed – a number that would have seemed preposterous only a few years ago. Furthermore, should China and Russia surprise the United States by building more ships and submarines than anticipated during force structure planning, that number will change. In fact, another Force Structure Assessment may be accomplished soon, guided by the NDS.7

From the rhetoric during campaign season some expected the Trump Administration to significantly change the U.S. security approach which favored a commitment to a system of alliances and maintenance of a forward military posture. Scholars such Dr. John T. Kuehn considered an active military and forward posture to result in indecisive and expensive military operations. Kuehn advocated for a “command of the commons approach” which uses naval and air forces to secure the North American continent from threats while avoiding expensive “boots on the ground” forward military presence.8 Instead, the Trump Administration has been convinced that U.S. security concerns continue to be best addressed by a powerful military, positioned and engaged forward with allied partners.

Military leadership in the Pacific theater has argued that reducing America’s overseas military deployments and alliance commitments places the United States at a distinct disadvantage. They point out that due to considerable distances, there is significant operational risk for the military to adequately reinforce units and fulfill treaty obligations during a full-scale contingency. They emphasize that restoring a forward-based deterrent once it has been dismantled is much more difficult than estimated.9

The National Security Strategy states that the U.S. will “maintain a forward military presence capable of deterring and, if necessary, defeating any adversary.” It also declares “we will reinforce our commitment to freedom of the seas and the peaceful resolution of territorial and maritime disputes in accordance with international law.” The Trump Administration’s decision that continuing a policy that considers forward presence and close cooperation with allies as the best means to safeguard freedom of the seas  means that the U.S. Navy and its allies will seek to maintain or increase its presence in disputed areas. Freedom of Navigation Operations (FONOPS) and exercises such as the three carrier strike group maneuver in the East China Sea last Fall will continue. Furthermore, the National Defense Strategy’s declaration to be less operationally predictable may result in unforeseen increases in forward posture and operations in key regions, especially the Indo Pacific region.

In A Cooperative Strategy for 21st Century Seapower (CS21R), the sea services of the U.S. Navy, Marine Corps, and Coast Guard state that the essential function of maritime security supports free and open seaborne commerce. CS21R was forward-leaning in that it addressed the increasing tension and instability caused by China’s naval expansion, lack of transparency in its military intentions, and behavior that suggests it is not on an inevitable path towards integrating fully with international norms, institutions, and standards of behavior. The NSS states the United States will encourage regional cooperation to maintain free and open seaways and identifies China as challenging American power, influence and interests, attempting to erode American security and prosperity. CS21R remains in alignment with this, but revision is required for the U.S. Navy and Marine Corps to implement the NDS. The NDS requires prioritization of threats, mission, geography and investment to address long term strategic competitions with China and Russia. In addition, the NDS concepts of Dynamic Force Employment and Global Operating Model require elaboration by the services for competition in the maritime environment, and the NDS direction to restore warfighting readiness and build a more lethal force must also be addressed.

A broader task is to convince the American public why the danger of inter-state strategic competition with China and Russia is more pressing than the danger of Islamic terrorists. Furthermore, they must approve of the means of military primacy to deter or defeat this threat, for they as taxpayers ultimately fund the military – and more funding will be required should China’s military expansion accelerate. Finally, U.S. citizens must endorse the forward deployment of military and American leadership abroad as an essential way to promote stability and security abroad which reduces threats to prosperity and safety at home. This is a difficult task, for most Americans are more mindful of the death and destruction caused by Al-Qaeda and ISIS than of the consequences of a future conflict with China. They are largely unaware of malign maritime activities across the world and the operations of U.S. forces postured to counter them. The NSS and NDS are a good start to shift public perceptions; follow through is essential.

Jack McKechnie is a Commander in the U.S. Navy and a graduate student at American University, School of International Service. The views expressed in this article are his own.