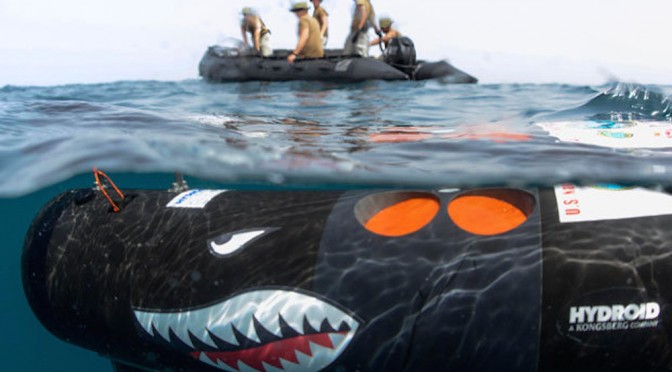 To start our UUV Week, we’re talking with Chris Rawley, owner of the website Naval Drones: Unmanned Naval Systems and author of Unconventional Warfare 2.0. Chris is a surface warfare officer in the US Navy Reserve.

SD: Thanks for talking with us today, Chris. Let’s get right to it with some initial broad strokes. There’s clearly a great deal of potential out there for UUV platforms, but in a very general sense, what mission areas of those set out by the US Navy’s UUV Master Plan show the most promise in terms of cost effectiveness and practicality?

CR: Thanks Sally. Before I start, I have to provide the disclaimer that I am speaking here in my personal capacity and my comments and opinions do not reflect U.S. Navy or DoD policy. Also, I am by no means an expert in this field, though I have picked up some knowledge the past few of years writing for “Naval Drones,” which was initially established as a marketing tool for a UUV concept I developed. After some fits and starts, my company is currently working on this UUV design with a prototyping firm.

From my perspective, mine countermeasures is the mission area ripest for disruption by unmanned undersea vehicles. As CIMSEC’s readers know, mine clearance involves a painstaking, methodical process of hunting to rule out false positives detected by various sensors or using sweeping gear to activate the mines. Dedicated mine countermeasures ships, though still in service, will eventually be replaced multi-mission platforms embarking UUVs. Most readers know about the Littoral Combat Ship’s dedicated mine countermeasures payload, but pretty much any naval combatant or auxiliary with a margin of payload capacity such as the JHSV can launch UUVs or carry boats or unmanned surface vessels (USVs) that can launch UUVs directly into a mine field at a safe stand-off distance from the mother ship . Multiple UUVs operating together will eventually become faster at mine hunting than dedicated surface ships with sweeping gear or mine-detection sonars. ROVs and UUVs such as the SeaFox can also localize, identify, and neutralize the mines. Though I think the UUV Master plan specifically mentions nine mission areas, besides MCM, at some point UUVs will play a part in pretty much any kind of naval operation one could imagine.

While we continue to wait for the silver bullet of long-endurance propulsion systems, the three areas of UUV development with the most potential I see are payload miniaturization, payload modularity, and swarming algorithms.

SD: Let’s talk specifically about UUVs in an ASW capacity. A lot of readers (okay, especially me) are interested in what UUVs can bring to anti-submarine warfare (ASW). In all likelihood, such a platform would need to detect low-frequency signals, demanding a large array and a vehicle to support it. Will there have to be a trade off between the reasonable size of a notional platform (to support such an array) and such a platform’s detection capabilities? Are leave-behind arrays delivered as part of a UUV payload a more desirable option?

CR: Autonomous underwater vehicles such as gliders are already helping to characterize the water column, which as you know is one of the most important foundations of ASW. As far as sub-hunting goes, a large UUV towing a passive array might be one way to do it, though I’m not sure that is feasible for a variety of reasons. Or as you’ve alluded to, a larger UUV could basically become a means to more precisely deploy sonobuoys or emplace arrays on the bottom. What about smaller, more numerous UUVs each carrying a single hydrophone and operating at different depths? Or UUVs able to surface and act as non-acoustic data relays between bottom arrays and ASW aircraft? I think there is certainly room for some R&D and experimentation in this area.

SD: The idea of an UUV with the capacity to surface and communicate as a non-acoustic data relay with an MPRA asset is particularly promising and offers a solution to some of the major complexities of airborne prosecutions. Further, the idea of employing UUVs to deploy hydrophones or arrays at specific depths is a novel turn on a well-established technique. But perhaps getting those assets on-station at the appropriate times would present a difficulty; after all, one of MPRA/airborne ASW’s major advantages is speed and flexibility relative to the target. On to another ASW question: in an increasingly crowded underwater environment, do you think that submarine-launched UUVs will offer more or less stealth to launching platforms? Do you see any applicability for UUVs as a decoy, or would maintaining acoustic superiority for existing and future subs prove a more worthwhile, cost-effective pursuit?

CR: Unlike a sub-fired missile, I’m not sure a UUV will make a launching submarine any less stealthy. To my knowledge, most of the UUVs that have been tested have been “swim out,” so they wouldn’t add much extra acoustic signature to the launch platform. Some sort of acoustic or magnetic decoy UUV does seem like a viable and useful payload for a submarine.

SD: U.S. Submarine-launched UUVs may have somewhat of a compatibility crisis in the coming decades. SSGNs are uniquely suited for UUV operations, but as modified-Ohio class platforms reach the end of their service life in the coming decades, how do you think UUV platforms will fit into the Virginia Payload Module program?

CR: Though launching and recovering a UUV from a submarine certainly adds an element of “stealthiness” for the UUVs themselves, it also comes with several complications. There are trade-offs in a submarine’s limited tube space – be it torpedo tubes or the VPM – between UUVs and other payloads such as torpedoes and missiles. Moreover, as you note, more submersible vehicles will result in an increasingly crowded operating environment. A manned submarine operating in conjunction with a large number of friendly (and potentially, enemy) UUVs makes waterspace deconfliction challenging and puts a capital ship at risk for a collision, especially as the size and speed of UUVs grows.

But here’s the thing: a UUV is inherently stealthy. Why do we need to launch it from another low signature platform (a submarine) when it can be launched more cheaply and across wider areas (such as shallow water littorals) by more numerous surface vessels or even air platforms?   Where there is no other way to get a shorter ranged UUV into the water column, a submarine may be the answer. To answer your question, we should save limited submarine payload capacity for offensive weapons and insert the majority of UUVs into the battlespace using more affordable means.

SD: Interesting points. I hadn’t considered the idea of mutual interference, and it certainly makes sense to deploy UUV assets from surface or air assets, where space would not be as much of a premium. This is another broad question, but what role do you see for UUVs in developing a cogent strategy to counter A2AD?

CR: UUVs could potentially serve as fire control sensors, decoys, and deception tools during a counter-A2AD campaign. I’ll leave it at that.

SD: Fair enough. One of the most frequently cited criticisms of developing UUV platforms is the inherent difficulty of communication and navigation in an underwater environment, as well as limitations on data links and processing. What is your answer to these criticisms?

CR: The easiest solution is the surface the UUV every now and then to transmit its data and get its bearings. But advances in underwater data modems (both acoustic and non-acoustic), along with autonomy will mitigate some of these challenges

SD: If operating covertly in a denied area, surfacing might be detrimental to the UUVs mission, but no more so than other subsurface assets that might be required to surface to receive or transmit data. But, admittedly, this is a pretty narrow scope to view a very broad potential mission set, and such a concern would not apply to all those potential applications. Let’s talk autonomous vehicles. AUVs operating at a distance will undoubtedly carry the potential for loss or interception. Is there an acceptable level of platform loss or risk operators of UUVs will have to accept?

CR: Sure. I think we will need a variety of UUV types. Some, like Large Displacement Unmanned Underwater Vehicle (LDUUV), will be large, expensive, and multipurpose. Others will be designed to be single-purpose, affordable, and expendable, while some others will be somewhere in the middle.

SD: Specifically though, do you think that there might be inherent risks to doing business via UUVs that do not exist for manned counterparts? Not necessarily that these risks outweigh the benefits, but, if there are any, they’re worth discussing.

CR: Signal interception is a problem faced with pretty much any platform these days. Even manned aircraft are going to be hard pressed to operate without emissions given how networked everything is.  Many UUV atmospheric signals will be on commercial channels, so hard to differentiate from civilian traffic. As to the technology being recovered by an enemy, that is certainly possible too, and a much higher risk for unmanned vehicles. We’ve learned lessons from UAVs that are applicable in this area.

SD: Great point; the risk for signal interception would likely not be any greater for unmanned platforms, and could be mitigated in similar ways. Let’s scale down a bit. On your blog, you recently discussed possible applications of small-scale UUVs, such as those fielded by the University of Graz’s Collective Cognitive Robots project. What applications do you envision for small-scale UUVs like these operationally?

CR: Search and recovery, especially in inshore waters or the littorals, comes to mind. But also acoustic decoys, and maybe even small, mobile sonobuoys for ASW. I’d love to get some reader feedback on this one actually.

SD: I really look forward to reading what others have to say on this issue as well. I think the MPRA ASW applications are especially promising. Last but certainly not least, let’s discuss the LDUUV program. What is your take on pier-launched or even surface-ship based systems with longer endurance and on-station capabilities?

CR: For some applications, a pier-launched UUV might be viable. But a Navy’s strength is based on its mobility. So yes, as we seem to agree, surface ships are a pretty viable launch platform for large UUVs. The Naval Special Warfare Command’s Swimmer Delivery Vehicle is an analogy. Of course, they are most stealthy when operated from a submarine, but can also be launched from ships and smaller combatant craft. And depending on the operational range of the LDUUV, surface ships would be fine for many mission profiles. And if you are looking for stealth, the stealthiest platform is the one that hides in plain sight, so not every launch platform has to be a naval vessel.

SD: This has been tremendously interesting discussion! Thank you, Chris, for your time; congratulations on your progress with your own UUV design. We look forward to following its development! Thanks as well to the CIMSEC readers who have followed along. Let’s continue this discussion in the comments section.

Sally DeBoer is an Associate Editor for CIMSEC.

2 thoughts on “Unmanned Underwater Vehicles: A Conversation with Chris Rawley”