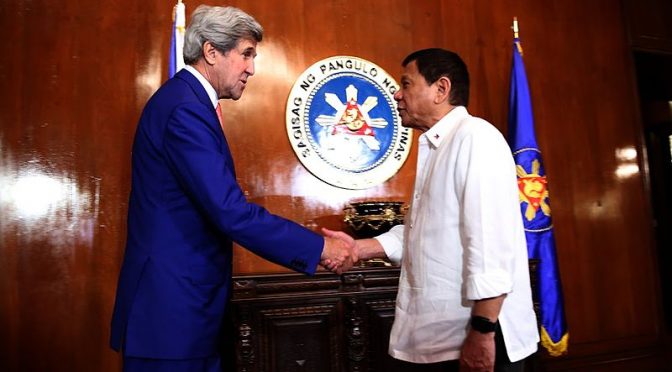 “Alliance does not mean love, any more than war means hate.” The words of Francis Parker Yockey accurately suggest that states build relationships with other states to advance mutual interests. The U.S.-Philippines alliance is no exception. Though the very close relationship between the two countries has experienced some hiccups recently, this article suggests that the mutual interests of both states are substantial enough to sustain cooperation between the two countries.

For the majority of American history, the lawmakers of the country were apt in following George Washington’s advice on foreign affairs: “It is our true policy to steer clear of permanent alliance with any portion of the foreign world.” As a result, for the first 165 years of its existence, the U.S. did not form any alliances with the exception of France during the revolutionary war. However, a completely different course has been taken since WWII, when the U.S. became heavily involved in global affairs. With the preeminence of transnational organizations and multi-party international treaties such as the United Nations and the North Atlantic Treaty Organization, Washington made numerous alliances. To this end, Washington’s isolationist policy was replaced by a highly inclusive and internationalist one.

However, there has been another noticeable episode in the United States’ relationships with its allies. From Europe to the Middle East and the Asia-Pacific, relationships with countries that at one point seemed politically untouchable have increasingly become vulnerable. The past few years have seen some uneasy episodes with Saudi Arabia, Israel, Turkey, the UK, and Japan. In that sense, the Philippines is only the latest chapter in the recent history of weakening partnerships.

Friend of the Philippines

The U.S.-Philippines relationship has been historically strong and is often categorized as a special relationship. It has seen its evolution from conflict to partnership to friction to re-emergence. Yet despite its unsettling history, the relationship between the two countries has been on the rise in recent years. The Enhanced Defense Cooperation Agreement between the Philippines and the United States signed on April 28, 2014 not only gave U.S. access to select Philippines bases, but also allowed the Philippines access to American ships and planes. In addition, the Philippines was set to gain invaluable training and assistance lessons to defend its sovereignty, which included more than $41 million – or almost 85 percent of the $49.72 million total amount this year of the Maritime Security Initiative funding for capacity-building initiatives in Southeast Asian states near the South China Sea. Philippines is also the largest recipient of U.S. assistance in Asia. The U.S. Agency for International Development (USAID) has facilitated more than $5 billion in infrastructure investments since 2013.

Though the relationship has been very close over the past few years, the election of Philippine President Rodrigo Duterte in June 2016 has instilled doubt in the future of the U.S.-Philippine alliance. In October 2016, Duterte announced a Philippines separation from the U.S. in favor of a closer relationship with China. The State Department, baffled by Duterte’s suggestion, said that it would seek an explanation of what the Philippines leader meant. This initial exchange was only the beginning of what became a series of episodes leading to an uneasy relationship between the two countries.

However, despite heavy rhetoric and passionate speeches, it is unlikely that the world has seen an end to the decades-old alliance. The reason is simply that the practical advantage of such an arrangement is beneficial to both the U.S. and the Philippines, and both countries are better off in cooperation than in discord.

Though the President of the Philippines wants to exercise an “independent foreign policy,” the reality is that the country is still heavily dependent on the U.S., especially in the matter of defense. As one of the region’s weakest militaries, the Armed Forces of the Philippines (AFP) rely significantly on the U.S. to address its security challenges, including tension in the South China Sea, terrorism, and natural disasters. Even domestically, the AFP will not look too favorably upon an isolationist policy towards Washington. The military plays an instrumental role in the security of the country and is vital for peace processes with communist rebels and insurgent groups. Duterte would not go far in achieving his objectives unless the basic security condition is met. For that, he is much better off having the U.S. on his side.

A fundamental question remains unanswered by Duterte or his aides: which country would the Philippines turn to for help if it chooses to end its bond with Washington? Granted, there have been some talks with China and Russia, but it is unlikely either of the two countries will be able to fill a void as big as the U.S. Dependence on China would be problematic for the Philippines due to the disputed territorial claims, especially when China’s ambitions over the South China Sea have been described as the biggest threat to Philippines sovereignty. Moreover, the early proposals of buying equipment from China and Russia have already seen some pushback in the defense circles both privately and publicly.

Practically speaking, even if there is a genuine desire to escape any relations with the U.S., the wise policy would be to incrementally remove its dependence on Washington instead of revolutionary-style revisionism. This would allow the Philippines some time to become more self-sustaining as well as to forge alliances with other countries. However, such an arrangement may take several years for Manila and can certainly not be achieved in the six-year term of Duterte.

There is already elite and bureaucratic resistance to Duterte. For instance, the Defense secretary, Delfin Lorenzana, has voiced clear support for the U.S. mutual defense treaty. Moreover, separation from the U.S. is also going against the local public, which has long been heavily in favor of the U.S. According to the Pew Research Center, 92 percent of respondents in the Philippines said they had a favorable view of the United States. In comparison, only 54 percent said they regarded China favorably.

These realities have at least in part been recognized by Duterte. For instance, though he initially called for the withdrawal of U.S. troops from the nation’s south, he later conceded that the country would need U.S. presence for the South China Sea. His aides have also accepted that the existing treaties would also remain enact.

The Philippines, Southeast Asia’s oldest democracy, is an important trade and security partner for the U.S. The Philippines has grown to become one of Southeast Asia’s strongest growing economies with GDP growth of about six percent a year and trade with the U.S. at $18 billion last year. If the Philippines aligns itself with China, Washington will struggle to hold the “first island chain” in the Western Pacific that encompasses “the Japanese archipelago, the Ryukyus, Taiwan, and the Philippine archipelago.” Defending the first island chain has been an important U.S. foreign policy objective since the Cold War and Washington is unlikely to change that policy given its significance for deterrence. Freedom of navigation in the South China Sea is a contentious issue where $5.3 trillion in goods is estimated to pass through the South China sea annually, including $1.2 trillion in U.S. trade. With the Philippines no longer on its side, the U.S. Navy would find it much harder to protect important sea lanes and sustain military operations.

The U.S.-Philippines alliance may have suffered but it is certainly not dead. Both countries gain a strategic advantage by being in such a relationship. Ups and downs are a natural course for alliances and the U.S.-Philippines relationship is no exception to the rule. It is possible that some change may occur in the conduct of the relationship, but sooner or later both countries will realize it is better to remain in such an arrangement, even if they do not see eye to eye, than to stray to a path unknown.

Usman Javed holds an MPhil from the Judge Business School from the University of Cambridge. As the author of several articles, editorials, reports and media publications, he has presented his research at a number of conferences. His work experience includes working for the World Bank, consulting for a number of start-ups in the UK, Asia-Pacific, and North America and co-founding an Ed-Tech start-up.