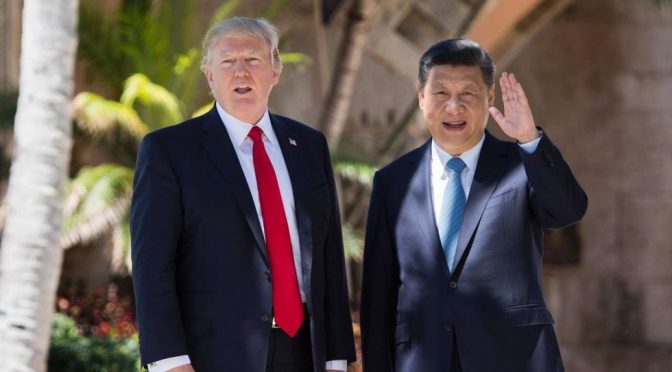 As the dust settles and more disclosures are made, what can be said now of the Trump-Xi Summit a month later?

Last month, I wrote an article titled “After the Summit: Where Do U.S.-China Relations Go From Here?” where I posited that China appeared to have a lot to be gratified about in 2016 in terms of advancing its rising regional and international role. The 6-7 April Trump-Xi Summit was the latest strategic signaling to the world that Beijing has abandoned its longstanding state policy of “hide capabilities and bide time” and will now assume its rightful place on the world stage as a destined global power. I also suggested that the heavily choreographed summit seemed more about atmospherics than substance as evidenced by President Xi’s exacting protocol demands prior to the summit, President Trump’s decision to launch missile strikes against Syria during the summit, and the summit itself not yielding any concrete accomplishments beyond pledges of increased cooperation, new frameworks for dialogue, and a state visit to Beijing by Trump later in the year. One month later, as the dust settles and more disclosures are made, what can be said now of the summit?

Part 1 of this two-part series asks what the perceived and actual outcomes are from a Chinese, American, and international perspective. Part 2 will then ask which leader came out relatively stronger, what the ramifications for U.S.-China strategic relations are, what to expect when Trump visits China later in the year, and finally where the strategic opportunities are for the U.S. and how Washington can leverage them.

Looking back at China’s official public releases, think tank commentaries, and authoritative media reports of the summit, an overarching strategic communications theme was apparent across the tightly controlled and synchronized Chinese public information domain – “the summit charted a course and provided a roadmap for the China-U.S. relations, and established a new cooperation mechanism that will enhance and protect the all-important strategic bilateral relationship.” Supporting talking points shared (and probably coordinated) amongst the various Chinese interlocutors encompassed: (1) complementarity between the economies of China and the United States far exceeds any competition between them, (2) a thousand reasons for two countries to be good partners and not a single reason to damage the China-U.S. relations, (3) that China is firmly committed to the path of peaceful development, does not wish to play a zero-sum game, is not seeking hegemony, and is willing to work with the United States to maintain world peace, stability, and prosperity, and (4) that the U.S. relationship with China will depend on the hope for a “new pattern of relations between great powers” based on the principle of “no confrontation, no conflict, mutual respect, and win-win cooperation.” Common catchphrases used by Chinese government officials, pundits, and news media to characterize the summit included “mutual understanding, mutual trust, mutual respect, and mutual shaping.”

Given the circumstances, it seems that the Chinese public diplomacy apparatus – which Beijing uses to signal its policy priorities – struggled to make the case that the summit resulted in any substantive or tangible outcomes. Instead it expended an inordinate amount of attention on the intangible personal relationship between Xi and Trump and on the former’s proposed four dialogue mechanisms covering diplomacy and security, economics, law enforcement and cybersecurity, and social and people-to-people exchanges. This is not too surprising considering that Chinese think tank punditry and authoritative media reporting prior to the summit were, by and large, focused on building up Xi, jockeying for summit positions, expressing desired outcomes, and in some cases, grandstanding and hedging.

What may be more telling is the coverage by China’s Ministry of Foreign Affairs, think tanks, and authoritative media of areas of bilateral tensions – North Korea, Taiwan, South China Sea (SCS), and trade and commerce – during and after the summit. To date, they have been largely limited, vague, positive, and most importantly, provided no indication that Beijing is considering major changes in its policies in the aftermath of the summit.

The one exception may be North Korea. There have been sporadic dialogues in the Chinese media – most notably in the Global Times, a nationalist newspaper run by the state-run People’s Daily, that suggest a growing policy debate within China questioning Beijing’s longstanding support to North Korea, warn of potential sanctions, and caution Pyongyang if it “carries out a sixth nuclear test as expected, it is more likely than ever that the situation will cross the point of no return…all stakeholders will bear the consequences, with Pyongyang sure to suffer the greatest losses.” These media commentaries, while sometimes used to test reactions to potential foreign policies, do not necessarily represent the views of the state. But the warnings appear consistent with Beijing’s recent actions to include implementation of previous United Nations Security Council sanctions and the Xi-Trump phone call on 24 April to discuss possible solutions to the North Korean nuclear issue and denuclearization on the Korean Peninsula.

However, while encouraging, these latest Chinese cooperative moves may be motivated more by Xi’s desire to project goodwill with Trump than to help resolve the North Korean problem. Beijing has shown time and time again that its strategic interests in maintaining the status quo on the Korean Peninsula and ensuring a stable North Korea along its border override its desire to cooperate with Washington to denuclearize the peninsula. The coming months will reveal Beijing’s true intent, and more importantly, its sincerity and resolve this time around. Placating words are meaningless without persistent and consistent actions. Washington should trust but verify.

The White House praised the summit as a positive and productive opportunity for both presidents and their wives to get to know one another, and for their respective staffs to build rapport for the work ahead in reviewing the state of strategic bilateral relations and generating results-focused outcomes that would benefit both countries. Trump and Xi agreed to work in concert to expand areas of cooperation while managing differences based on mutual respect and to elevate existing bilateral talks to reflect the importance of making progress on strategic issues of mutual concern.

Overall, the meeting details were rather sparse for policy flexibility and probably indicative of the U.S. limited objectives for the summit considering the timing and duration of the meeting: (1) get through the state visit without any enduring policy encumbrances; (2) size up Chinese counterparts for future negotiations (trade, commerce, North Korea, Taiwan, SCS, etc.); and (3) set favorable conditions for the forthcoming and more substantive cabinet-level dialogues and state visit to China. Generally speaking, a major summit within the first 100 days of taking office may be too soon, particularly with the principal nation-state competitor, understaffed national security team, and an unsettled China policy.

Despite the positive and upbeat portrayals of the summit by Beijing and Washington, there was a wide divergence on whether the state visit was a success or not amongst U.S. think tank and media analysts. Some read the lack of a joint press conference or joint press statement as a failure; while others judged the summit as successful simply because it provided an opportunity for Trump and Xi to meet, lower heightened tensions, and set the conditions for future dialogues and negotiations. However, most agreed that the U.S. missile strikes on Syria overshadowed the summit and the summit itself produced few substantive or tangible results. That being said, many saw enough pleasantry between the two sides for restrained optimism in the coming year.

Most foreign media outlets were cautiously hopeful prior to the summit. Many welcomed the meeting as an occasion to reduce the rising tensions between Beijing and Washington, lower the risk of a disruptive trade war with global ramifications, and explore a new constructive and stabilizing relationship between the two economic and military juggernauts. After the summit, the same foreign media outlets largely acknowledged that there were few substantive or tangible outcomes and the U.S. missile strikes against Syria detracted from the meeting. Some even intimated that the latter may have been a subtle signal to China that the United States is ready to act militarily and unilaterally when faced with threats abroad to include North Korea. Nevertheless, the cordial tone and lack of controversy were generally considered positive steps towards ameliorating tensions in U.S.-China relations during the first eventful months of the Trump Administration.

U.S. regional allies and partners were rather anxious that Washington would make some sort of unilateral accommodation to Beijing without consultation and at their expense. In Tokyo, there had been apprehensions that the Trump Administration would attempt to use “the scent of a huge deal with China” as leverage to extract concessions from Japan, ease plans to step up pressure on Pyongyang, and give ground in the East China Sea (ECS) and SCS. In Seoul, there were fears that Washington would offer uncoordinated peninsular concessions to Beijing in exchange for pressuring Pyongyang. In Taipei, there were concerns that Trump would continue to use Taiwan as a bargaining chip in its trade negotiations with Beijing and possibly for North Korea, too. In Canberra, there were worries of being left behind on potential economic agreements.

All appear relieved with the summit’s lackluster outcomes. Trump’s telephone calls with Japanese Prime Minister Abe before and after the meeting seemed to allay the Japanese concerns. The Korean response was generally mixed with the Korean Foreign Ministry hailing the summit as successful and meaningful, while the Korean media calling out the meeting for its lack of any agreement on the North Korean nuclear and missile issue. The Taiwanese were likely reassured that the Chinese proposal for a Fourth Communique did not come up, in which Trump would again accede to Xi’s wishes by agreeing that there is but one China and that Taiwan is part of it, instead of the U.S. longstanding policy that it acknowledges the Chinese viewpoint but does not accept the viewpoint. The Australians were simply content that no economic agreements were made that upset their robust bilateral trade relations with China. As for the rest of the region, the media provided limited coverage – as is typical for events outside the region – with post-summit commentary predominantly observed in Singapore. As expected, Singapore took a neutral and measured position of the summit – “does not appear to have gone badly…and achieved little more than just sketching out the challenges which lie ahead on North Korea, SCS, and trade and commerce.”

This concludes the short discourse on the perceived and actual outcomes from a Chinese, American, and international Regional perspective on the Trump-Xi summit and sets the conditions for further discussion in part 2 on the assessment of which leader came out relatively stronger, ramifications for the U.S.-China strategic relations, expectations of Trump’s visit to China later in the year, and U.S. strategic opportunities and how Washington can leverage them.

Tuan Pham has extensive experience in the Indo-Asia-Pacific, and is widely published in national security affairs. The views expressed therein are their own and do not reflect the official policy or position of the U.S. Government.

Featured Image: Talks between Chinese President Xi Jinping and US President Donald Trump at the Mar-a-Lago estate in West Palm Beach, Florida, on Thursday and Friday have put bilateral ties back on track. (AFP)