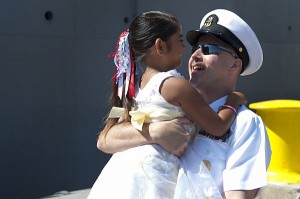 Professor Anne-Marie Slaughter has garnered record-setting attention for her Atlantic article “Why Women Still Can’t Have It All.” While primarily addressing women, I thought her piece also captured  the essence of changes occurring in men; many men my age do think more about so-called “work-life” balance than the men of generations past. When we have families, we want to be present to coach softball, catch the school play, or help with homework. Prof. Slaughter rightly points beyond gender to a generational shift in the prioritization of family life against a career.

Regardless of gender, though, her description of “time macho” professions – those that prize the expenditure of time as a measure of commitment and performance – is spot-on and should strike a chord with those of a naval persuasion:

Back in the Reagan administration, a New York Times story about the ferociously competitive budget director Dick Darman reported, “Mr. Darman sometimes managed to convey the impression that he was the last one working in the Reagan White House by leaving his suit coat on his chair and his office light burning after he left for home.” (Darman claimed that it was just easier to leave his suit jacket in the office so he could put it on again in the morning, but his record of psychological manipulation suggests otherwise.)

The culture of “time macho”—a relentless competition to work harder, stay later, pull more all-nighters, travel around the world and bill the extra hours that the international date line affords you—remains astonishingly prevalent among professionals today. Nothing captures the belief that more time equals more value better than the cult of billable hours afflicting large law firms across the country and providing exactly the wrong incentives for employees who hope to integrate work and family. Yet even in industries that don’t explicitly reward sheer quantity of hours spent on the job, the pressure to arrive early, stay late, and be available, always, for in-person meetings at 11 a.m. on Saturdays can be intense. Indeed, by some measures, the problem has gotten worse over time: a study by the Center for American Progress reports that nationwide, the share of all professionals—women and men—working more than 50 hours a week has increased since the late 1970s.

I know that naval officers, particularly those wearing black shoes out there, recognize the concept of “time macho” instantly.  What’s less clear is how to change this culture to accommodate a new generation of naval professionals who think about work and family differently than those of the past. To begin, we must recognize that long hours will never go away completely – I believe that one reason the military is a time macho organization is because it truly wants to provide the most value for the American taxpayer. Sometimes this requires sacrifice. There is a difference between complaining about the demands of military service and seeking ways to allow all of us to spend more time with those that we love. I remember my first Captain’s unconventional take on the familiar list of naval priorities, “ship, shipmate, self.” He said that this concept was sound, but that sometimes you have to take care of yourself in order to maximize your ability to serve the ship. This kind of thinking is what I’m talking about.

As such, I think it will become increasingly important for leaders to weigh judiciously the likely value to be found in burning the lamps late. They will have to recognize that flexible work schedules may likely incentivize quicker accomplishment of tasks; Prof. Slaughter rightly notes that  simply knowing that she was going to work late made her less efficient. Finally, as an organization which values technology, the Navy should seek ways to allow Sailors to work remotely at seagoing commands as it has done on shore stations.

What do you think? What can the Navy do to become less “time macho?”

LT Kurt Albaugh is President of the Center for International Maritime Security, a Surface Warfare Officer and Instructor in the Naval Academy’s English Department. The opinions and views expressed in this post are his alone and are presented in his personal capacity. They do not necessarily represent the views of U.S. Department of Defense or the U.S. Navy.