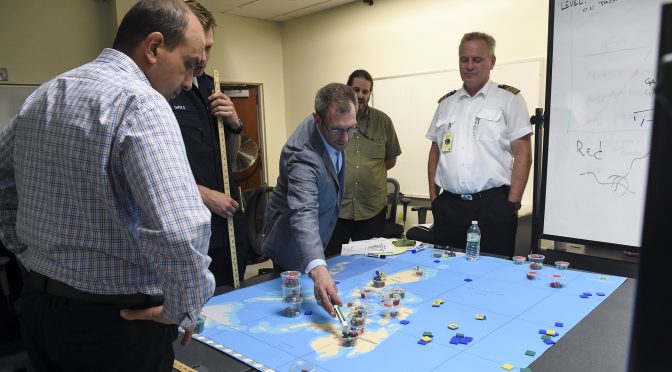 Gaming and the Levels of War

The Prussian military theorist Carl von Clausewitz famously observed that war is a continuation of politics by other means, an aphorism that is universally taught at the nation’s war and staff colleges. It implies that there is an intimate relationship between what happens on the battlefield and what happens in the capitals of the warring states, as well as those of neutrals and allies. In later chapters he expands on the idea, laying out various situations of relative strength and motivation among combatants and the way that the policy/strategy interface is affected.1 Given the prominence of this idea in his book, Clausewitz admits the difficulty of grasping the logic of how policy and warfare interact with one another, stating that in strategy “…what is more difficult to grasp are the intellectual factors involved. Even so, it is only in the highest levels of strategy [presumably where military strategy meets policy] that intellectual complications and extreme diversity of factors and relationships occur.”2 Having made that admission he goes on to simplify the matter by making an assumption about the coherency of the political level: “Once it has been determined what a war is meant to achieve and what it can achieve, it is easy to chart the course.”3 If only things were that straightforward.

Clausewitz thought that a good way for military operations to be harmonized with national strategy and political imperatives was for the strategist to lead the forces in the field, ala Frederick the Great.4 Abraham Lincoln actually dabbled with the idea when he took a trip down to the James River to check up on McClellan during the Peninsular Campaign.5 However, since that brief excursion, American practice has been for the president to stay close to the political front, even though being Commander-in-Chief, and choosing to delegate field command to a senior military officer. Depending on the president’s approach, factors such as policy, politics, and military strategy could be coordinated in Washington or perhaps, as in World War II, at allied conferences such as Arcadia, Casablanca, and Tehran. In theory, as Clausewitz presumes, the purpose and objectives of the war are outcomes of the political process and military strategy that are concocted, ideally, in consultation with senior military leadership. The resulting strategy would be converted into orders which the fighting forces would carry out.

However, history teaches us that coherency in the relationship between policy and the military instrument (which is somewhat simplistically termed here as the strategy/operations interface) is both an aspiration and an assumption on the part of most governments. The intellectual complications and diversity of factors Clausewitz mentions often put such coherency beyond reach. This represents a serious challenge to historians seeking to document causes and effects, but even more so it is an obstacle to game designers seeking to incorporate the interplay of both levels of war.

In order to prepare the way for a discussion of potential game methods to explore the interface, we will work our way through the levels of war in a temporal manner, proceeding from the beginning of war, through its execution, and then to the endgame. The relationships of the levels (the people and organizations responsible at each) and the challenges to gaming them change a bit at each stage.

Combining Strategy and Operations in Wargames

It is often the case that scenarios for operational-level wargames include a “road-to-war” section that offers a plausible narrative of how the crisis or an attack that starts the game came about. As routinely as such narratives are produced, their influence on the game tends to wane as the game proceeds. Players and umpires become immersed in operational moves and counter-moves. Moreover, the road-to-war narrative may lack sufficient discussion of factors that would be needed to power analyses or move assessments farther downstream in the game. The bottom line is that unless a game is designed such that it includes specific measures to examine the matter, the strategy/operations interface gets short shrift in current gaming practice.

Of course, no plan survives contact with the enemy, so inevitably, once a war starts, a strategy/operations feedback loop of some sort must be established. Such loops automatically raise the issue of the degree to which operations are subject to detailed management from Washington. In some cases, such as Vietnam, operations such as air strikes into North Vietnam were micromanaged from the White House. In others, such as Desert Storm, General Schwarzkopf went into cease fire negotiations with little in the way of guidance from the president. In between those extremes are any number of cases, such as Lincoln and Grant, in which we find a good balance of delegation and oversight.

At this point it should be mentioned that each level of war contains its own logic and its own set of imperatives. The fundamental purpose of each higher command echelon is to coordinate and support the staffs and units that report to it. However, there is also the inherent requirement for higher echelons to override or sub-optimize the logic of lower echelon operations. If tactical victory was all that mattered, operational-level staffs would not have to worry about harmonizing strategy and tactics and could only focus on coordinating the tactical units below them. Similarly, if operational logic governed things once war broke out – a view that was widely held in earlier times – then political oversight would be unnecessary and likely counter-productive. The point is that there frequently arises occasions in which higher commands must impose guidance on lower level forces that exposes them to higher risk or reins them in somehow in order to protect or achieve higher level objectives.

In current operational-level gaming practice across the Department of Defense (DoD), Blue (U.S.) players generally have a free hand once they are given the starting scenario and perhaps a campaign plan. Any guidance from either the game control cell or a “council of elders,” while frequently advertised as guidance from higher authority, is almost always based on regulating the progress of the game rather than an attempt to explore the strategy/operations interface. The net effect of this “strategic vacuum” is the tendency for players to focus at the tactical level, which is what most Blue players, regardless of service, are most comfortable with. Control tries to keep them oriented on the operational level by various means, including by providing broad move feedback vice detailed battle reports.

On the other hand, for any number of reasons it is common for Red (the enemy, whoever that might be for the particular game), especially free-play Red, to pitch their moves at the strategic level. One reason is that Red is frequently weaker in conventional military power than Blue and so seeks asymmetric avenues of advantage. Red also tends to be represented by fewer players who are organized into a single cell, thus facilitating multi-level thinking. This creates a problem for game umpires who must reconcile asymmetric move inputs: operational from Blue, and strategic/tactical from Red. The frequent response is to factor out Red’s stratagems, perhaps informing Blue of them, and concocting operational-level assessments based on presumed Red moves at that level. If Blue’s political-level responses and resulting guidance to operational-level players is not provided in the feedback, an opportunity to incorporate the strategy/operations interface is lost.

Regardless of how the strategy/operations gap takes form in operational-level games, perhaps the biggest vacuum is in addressing the endgame – how the war ends, a major gap in the planning for OIF. True also for strategy games, the arena of what might be termed “Phase IV”6 is surrounded by a moat of technical and intellectual difficulties that all but isolates it from routine incorporation into gaming. Regardless of how and why a war starts, actions by both sides might serve to transform the nature of the conflict, thereby confounding any pre-war calculations of how it might end. Among the difficulties is how long the war lasts. Desert Storm terminated in roughly the time a week-long wargame would run. Seventeen years after its onset, Afghanistan still simmers. Wars are propelled by disputes, the nature of which heavily influences how long hostilities drag on. Successful military operations, in and of themselves, are not always a sufficient cause for war termination. This therefore presents procedural difficulties for gaming. Even if a game is played out until one side achieves some kind of military checkmate, the matter is not necessarily settled.

Recreational wargames, especially the game board style, can be played out to a decision. In fact, that is the whole idea behind them. However, the decision is usually a function of victory points accrued via operational success, thus the operations/strategy interface is hardwired into the experience.7 In free-assessed games, typical of most large military professional games, it is rare for a game to arrive at a strategic decision. One of the reasons is mechanical, in that the game is arbitrarily limited in moves by the amount of time players have, usually several days to a week. Moreover, game objectives normally focus on specific operational-level issues, obviating any motivation to press for strategic closure. Then too, the technique of free assessment, the use of human umpires to assess moves based on their judgment, makes “who won” either moot, or at least a subjective matter.

[7] There are some games that do address the operations/policy interface, an example being Persian Incursion, a board game designed by Larry Bond, et.al. that employs cards depicting various political conditions attendant to Israeli strikes on Iranian nuclear facilities. See https://clashofarms.com/files/PI_Sample%20Rules.pdf for a description of game mechanics.

One thought on “Then What? Wargaming the Interface Between Strategy and Operations, Pt. 2”