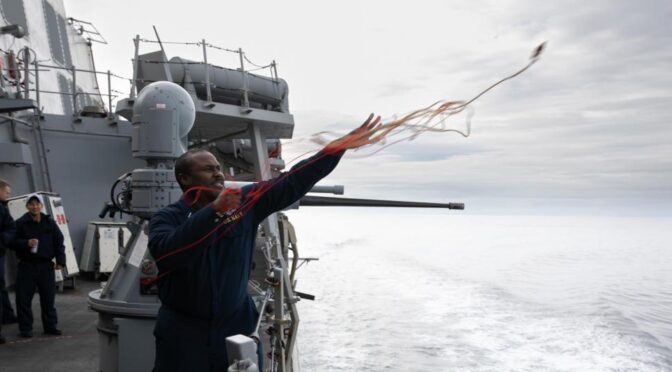 In his recent CIMSEC article, Bill Golden argues that there is too much variance in the surface warfare officer (SWO) qualification process and questions whether ship captains have adequate experience to qualify junior officers.1 To address these perceived problems, he proposes that the Surface Warfare Schools Command (SWSC) commanding officer (CO) administer a qualification test between an officer’s first and second division officer tours. The argument for this change overstates the problems posed by variance in the qualification process, neglects the value of the current method, and does not reckon with how the proposed changes would deviate from the community’s culture, which values diversity of experience and command at sea.

For context, the existing process culminates in an oral exam, or board, during which the candidate answers a wide variety of questions from the ship’s department heads, Executive Officer (XO), and CO. Based on completing pre-requisite qualifications and their performance in the board, the captain then decides if the candidate has earned the SWO qualification and presents the SWO pin in a wardroom ceremony.

While it is true that qualification boards vary from ship to ship, this variance is not as wide as Golden suggests. To paraphrase Mark Twain, SWO boards do not repeat themselves, but they often rhyme. The SWO Career Manual emphasizes the importance of maintaining “consistent qualification standards.”2 Despite differences in detail, boards across the fleet are generally similar in approach. Every CO designs their boards based on their experience, both as a candidate and then as a board member, resulting in boards that are generally consistent in scope and scale. Variance typically reflects the CO and board members tailoring questions to the ship’s technical and operational circumstances, an assessment of the candidate’s strengths and weaknesses, and the board members’ own diverse professional backgrounds.

It is unclear whether this variance is a problem. Golden writes that “SWOs yearn for standardization,” but neither defines this desire’s extent, nor cites evidence of it. He suggests several potential benefits of standardization, specifically increasing confidence in the readiness of SWOs and improving other communities’ respect for SWOs. Again, Golden presents no evidence for either issue. With regard to readiness, he does not identify negative outcomes caused by SWO qualification variance. Like him, I have not found any. For example, the 2017 Comprehensive Review following the Fitzgerald and John S. McCain collisions did not point to SWO qualification variance as a contributing factor.3 Moreover, managing other communities’ perceptions should not shape SWO qualification policy.

Golden asserts that COs – of all ranks – are not the most experienced officers available and suggests that the SWSC CO, a post-major command Captain, is the most experienced and would therefore be the ideal qualification authority. Although a ship CO may not be “the best available,” COs of all ranks have sufficient naval experience – and command perspective – to lead a rigorous and fair qualification process that is consistent with community policy. Some COs may have more experience, but even an O-4 CO has served at sea as a division officer, department head and XO, just like any other CO. Although the SWSC CO and staff have extensive experience, they are removed in time and space from afloat operations, inevitably causing their shipboard experiences to atrophy and perspectives to shift.

The existing system benefits the candidate, the board members, and the wardroom in ways that would diminish or disappear under the proposed overhaul. For the candidate, qualifying during the first division officer tour provides a significant goal to pursue (and achieve) during that assignment. The oral board format presents a perhaps unfamiliar challenge, but some scholars argue that, unlike a written test, it enables the candidate to demonstrate mental agility and to be treated like someone “who [has] interesting things to say and can handle being put on the spot.”4 Completing the qualification during their first tour also gives them the opportunity to “grow into” their new role as a warfare-qualified officer and report to their second tour as a “full up round.”

For the board members, each board offers opportunities to reinforce and improve their own knowledge, while also considering how they might run boards themselves when in command. For the rest of the wardroom, preparing a candidate for SWO qualifications is a team effort that includes accomplishments to publicly recognize and collectively celebrate. These “pinning” events affirm the qualification’s significance, commend the effort made to earn it, and help build community identity. If centralized ashore at SWSC, preparing for qualification would remain a team effort until the candidate leaves the ship, but the team would lose that direct connection to, and positive feedback from, the new SWO’s milestone accomplishment.

Golden’s premise also raises important fundamental questions: What does a SWO pin mean? What is the culture of the surface warfare community? What should both be in the future?

The SWO qualification represents that the wearer not only achieved pre-requisite qualifications – most notably officer of the deck underway – but also built a foundation of knowledge, has the aptitude to continue their professional development, can confidently discuss complex naval concepts, and will well represent the community. A SWO pin earned through a standardized, bibliography-based, written test and shiphandling assessment, as Golden advocates, would not necessarily represent the wearer’s holistic foundation for future growth.

Culturally, the current qualification process is consistent with the community’s long-standing character, which values diversity of experience and upholds command at sea as the pinnacle of responsibility and trust. The members’ wide variety of perspectives and experiences enrich SWO boards and increase their rigor. Furthermore, it is only natural that the CO bears responsibility for training and qualifying junior officers on their ship, not just in a division officer’s capstone SWO board, but also throughout their time onboard. The CO observes and guides an officer’s qualification progress and, over time, builds trust in them as a watchstander and confidence in them as a future SWO before making the qualification decision. The Navy entrusts the captain to lead a warship and its crew. It would be logically inconsistent to remove qualifying junior officers from their responsibilities. Such a change would undermine the community’s commitment to the importance of command at sea.

The surface warfare qualification is a critical career milestone and symbolizes an officer’s identity as a SWO. Golden rightly examines how to improve the SWO qualification process, but standardizing the process and centralizing it ashore would not be as beneficial as he argues and would be contrary to the community’s character. If the SWO community desires to standardize the qualification process, it should first consider refining the current approach. For example, just as the SWO Career Manual outlines what topics should be included in a command qualification board, this instruction could also describe in more detail what a CO should include in a SWO board.5 Although worthwhile to assess through the “Get Real, Get Better” lens how officers earn the surface warfare qualification, the existing process maintains a sufficiently consistent standard, benefits both the candidate and the wardroom, and reinforces the culture of the SWO community.

CDR Rob Watts is the Current Operations Director at U.S. Pacific Fleet and most recently commanded USS John Paul Jones (DDG 53). He holds a B.A. in Foreign Affairs and History from the University of Virginia and a Master’s in Public Policy from Princeton University. The views expressed here are those of the author and do not necessarily represent the views of the Department of the Navy or the Department of Defense.