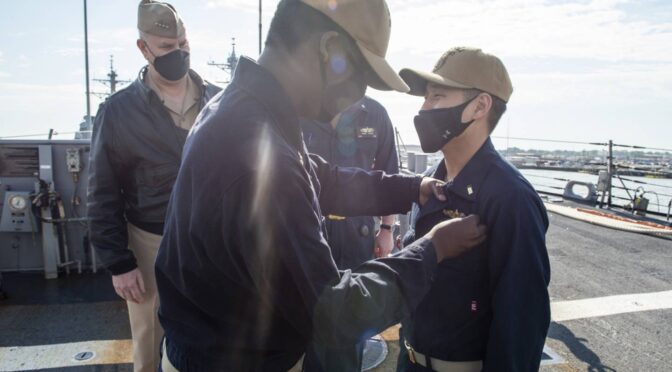 First awarded in 1975, the SWO pin was created to identify a cadre of professional mariners who operate U.S. warships, largely in response to the insignia worn by aviators and submariners.1 As a result of the evolution in naval warfare in World War II, the SWO community was competing with the submarine and aviation communities for talented officers. The new insignia helped the SWO community reestablish its identity and instill a sense of pride within the SWO wardroom.

Today, there is demonstrated, acknowledged variance in the execution of requirements for a Surface Warfare Officer (SWO) to earn their qualification and warfare insignia, the SWO pin. The breadth of knowledge needed to be a successful SWO today is different than when the SWO pin was established. Olympian Steve Prefontaine was at the top of the track world in 1975 when he died (and when the SWO pin was created). Runners still use many of the same tools as they did almost 50 years ago but have advanced their processes to be faster today. Organizationally, through standardization, SWOs will evolve many of their proven tools and also learn how to run faster. The SWO community has the opportunity to authentically embrace “Get Real, Get Better” by better standardizing the path to, and final assessment for, SWO qualification.2

SWOs can get real by acknowledging the varying degrees of experience and warfare expertise among COs who award SWO pins. A lieutenant commander with 12 years of experience in early command has the same authority to award a SWO pin as the captain of a cruiser, who has over 20 years of experience and is a warfare commander. SWOs need to Get Better by standardizing and aligning the qualification process ensuring our assessors are the best available. To do so, the SWO community must centralize awarding the SWO pin at Surface Warfare Schools Command (SWSC) or the Type Commander (TYCOM) to reduce variance in the requirements for qualification and unite SWO identity across the Navy.

Today, the requirements to earn a SWO pin are codified in Commander, Naval Surface Forces Instruction 1412.7A, “Surface Warfare Officer Career Manual.” Ultimately, however, the authority to award the SWO pin rests with each Commanding Officer. The SWO corps is diverse and experience of these commanders is varied; the process of earning a SWO pin is similarly diverse and varied on each warship. This variance must be leveraged to distill the very best practices, making clear the identification of SWOs as professionals. Standardizing SWO pin qualifications in this manner will also allow Commanding Officers to focus on shipboard watchstanding qualifications, where they have the most skin in the game.

When the U.S. Navy was established, new officers received on the job training (OJT) as midshipmen on warships. Formal school-based training was not part of the path to become an officer or earn command of a warship. This process was fundamentally altered in 1845, with the establishment of the U.S. Naval Academy.3 Recognizing the need for formal training in weapons, engineering, and operations, the Naval Destroyer School was created in 1961 in Newport, Rhode Island. Destroyer School evolved into Surface Warfare Officer School Division Officer Course (SWOSDOC), which was a six month course launched in 1975 and provided baseline training for all newly commissioned SWOs.4

In 2003, the Navy eliminated SWOSDOC and created SWOS-At-Sea.5 SWOS-At-Sea changed the Navy’s accession training to mirror the system in place in 1845; newly commissioned SWOs learned their trade, again, through OJT. Since that regression, the SWO community has returned to providing new SWO ensigns formal classroom training before they report to their ships. Today, in 2022, a newly commissioned SWO attends Basic Division Officer Course (BDOC) and Officer of the Deck Phase I (several months of classroom training) to learn the foundational tenants of seamanship, navigation, and leading sailors at sea. These courses have been received positively by SWOs of all ranks, and the change has proven invaluable in improving at-sea bridge watchstanding performance. The formalization and evolution of training refined what it means to be a SWO and provided a superior product at each step of the way: an officer better prepared to operate and lead at sea.

The SWO community experienced an identity crisis in the 1960s, losing officers to the other line communities. When Admiral Zumwalt became CNO in 1970, SWO retention was at 14 percent. Admiral Zumwalt created a group of junior SWOs to study factors causing poor retention, the SWO Retention Study Group. This group recommended “more rigorous standards, better schooling, and a surface warfare pin equivalent to the dolphins worn by submariners or the wings by the aviators.”6 By 1975, retention had improved to 35 percent. Firmly establishing the identity of a SWO, through uniformity in training and awarding of insignia, improved the SWO wardroom. Continuing to refine our SWO training processes, by standardization of the SWO pin, will increase confidence in the readiness of SWOs and strengthen respect of the SWO community across other line officer designators.

The SWO Pin of the Future

The process for standardizing the SWO pin already exists; it simply needs to be tailored to a more junior cohort. The Command Assessment, administered between department head tours, screens midgrade SWO lieutenants before they are considered for Commander Command. The Command Assessment includes a written assessment, tactical assessment, and shiphandling practical. A similar process should be used to award the SWO pin to officers in between their first and second division officer tours and after earning their OOD underway qualification, contingent upon a recommendation from their current Commanding Officers.

In between a SWO’s first and second division officer tours, he or she attends Advanced Division Officer Course (ADOC). This new SWO pin assessment, which could be called the Surface Warfare Qualification Exam (SWQE), will consist of written exams and a shiphandling practical, to be conducted immediately before ADOC. The SWQE will not include a tactical assessment as first tour division officers have mostly focused on shiphandling and divisional leadership. To prepare for the exam, new SWOs will receive a bibliography at BDOC to guide their preparation for the written exam. Additionally, this bibliography will inform the officer training curricula for ship COs and XOs. Again, like the Command Assessment, first tour division officers will be expected to prepare in simulators throughout their tours prior to their shiphandling practical. After passing the SWQE, a newly minted SWO will receive his or her warfare insignia from the Commanding Officer of SWSC, a leader within the SWO community.

With this process, an established learning center will be the responsible custodian for qualification, removing the self-induced pressure on COs to qualify a poor performing division officer. While there is inequity in the opportunities to prepare for the current Command Assessment, the process is overwhelmingly viewed as objective and fair; the same cannot be said regarding the current path to SWO qualification.

During the existence of the SWOS-At-Sea program, SWOs were required to attend a finishing course, Advanced Shiphandling and Tactics (ASAT), at SWSC after attaining their officer of the deck underway qualification but before earning their SWO pins. The SWQE process is not the same as ASAT. In the legacy system, the responsibility to award the SWO pin rested with the Commanding Officer and attrition at ASAT was negligible. With the SWQE, every SWO pin in the Surface Navy will be awarded by SWSC.

While this will remove some responsibility from afloat Commanding Officers, it empowers them to focus on the most critical qualification awarded by a ship captain, Officer of the Deck underway. Additionally, this course will add one week to a training pipeline for junior SWOs. Rotation between first and second division officer tours can still follow the current model (24, 27, or 30 months) but be based on OOD underway qualification. The SWQE will allow officers to pursue additional shipboard qualifications (e.g. EOOW and TAO), and the success rate of officers throughout the assessment will inform ship captains regarding the efficacy of their training programs.

Creating a single standard for SWO qualification will make clear to the community what is expected of a qualified SWO. SWSC is well positioned to evolve exam material and influence shipboard officer training programs throughout the fleet. As additional leadership assessment programs gain maturity, they can be rolled into the SWQE. Data from performance at the SWQE will empower PERS-41 to understand which rising second tour division officers show promise to grow into senior SWOs and enable targeted retention packages before these officers have the opportunity to resign their commissions.

The military hinges on the ability of units to react with one another; units are expected to act according to established tactics, techniques, and procedures. Units that have been trained to the same standard are able to operate interchangeably because their capabilities are uniform. Aviators use the Air Combat Training Continuum to ensure each of their officers is able to operate at a codified level of expertise on their designated aircraft in any squadron in the Navy. SWOs not only need this same level of standardization in their officers, they yearn for it.

If the SWQE is established, it will require more resources and planning. Forecasting the appropriate number of accessions each year, scaling and budgeting for an additional assessment, and managing the timing of division officers (which is already a challenge) will be harder. Removing qualification from ships also removes the relationship between that officer, captain, and crew.

One possible alternative to centralizing all SWO qualifications at SWSC is designating an ISIC (e.g. PHIBRON or DESRON) in each port as the executive agent for SWO qualification, or conducting the assessments at the TYCOM with the training department (N7) as the executive agent. This will allow officers to be pinned on their ships after passing and decrease the variance that exists today, but it will not reduce variance to the same extent as having all officers assessed at SWSC. The proposed SWQE is imperfect with many details requiring refinement.

None of these factors outweigh the benefits of standardizing SWO qualification. Since 1845, the SWO community has reduced variance within its ranks and imbued a clearer identity in its officer corps through more robust, formalized training. To take this to the next level, the SWO community must standardize SWO qualification such that it incorporates the very best of what we already know about what SWOs need as warfighters and leverages the most experienced officers as assessors.

LCDR Bill Golden was commissioned as a Surface Warfare Officer in 2008. He has served on five warships and operated in the second, third, fifth, sixth, and seventh fleets. He holds a B.S. in Mathematics from the U.S. Naval Academy and an M.S. in Systems Engineering from the University of Virginia.