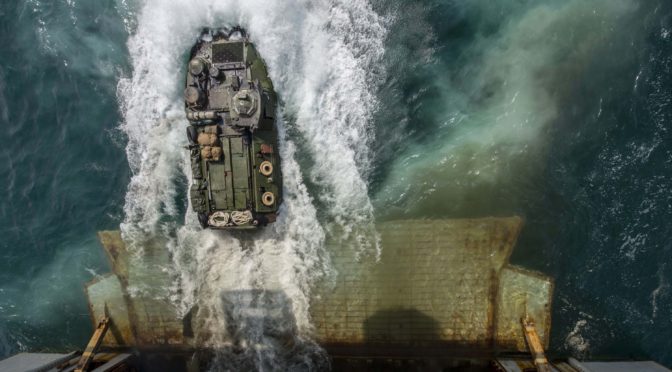 For almost two decades the United States Marine Corps has focused on a counterinsurgency fight through almost exclusively ground-based combat. While the Marine Corps has always met the demands of the nation, recent history has presented a challenge to its character as a naval service that requires a reinvigorated relationship with the U.S. Navy. The Commandant of the Marine Corps (CMC) and the Chief of Naval Operations have signaled to the Naval Service that force design will be conducted along complementary, parallel, and coordinated paths toward transforming into future naval expeditionary and fleet forces.1

The Marine Corps, as a service, must be prepared to operate inside actively contested maritime and littoral spaces in support of fleet operations or wherever its role as the nation’s naval expeditionary force-in-readiness takes it. In similar fashion, given its understandable reticence to risk capital ships, the Navy must be comfortable with and capable of operating with regional partners and projecting power within a given adversary’s weapons engagement zone (WEZ) in a command and control degraded/denied environment. As stated in the Commandant’s Planning Guidance (CPG), these “Stand-in” forces must be, “designed to generate technically disruptive, tactical stand-in engagements that confront aggressor naval forces with an array of low signature, affordable and risk-worthy platforms and payloads.”2 In his planning guidance, the CMC further states, “I will continue to advocate for the continued forward deployment of our forces globally to compete against the malign activities of China, Russia, Iran, and their proxies – with a prioritized focus on China’s One Belt One Road initiative and Chinese malign activities in the East and South China Seas. This is not intended to be a defense of the status quo as our forces currently forward deployed lack the requisite capabilities to deter our adversaries and persist in a contested space to facilitate sea denial.”3

Additionally, the CMC has identified investment in large unmanned surface vessels, extra-large sub-surface vessels, and Expeditionary Advanced Bases (EABs) as critical in countering the local numerical superiority of adversaries in great power competition. While significant exercises and experimentation has been conducted by the Fleet Marine Force (FMF) to address peer threats in the high arctic and western Pacific, it must be understood that the Naval Service does not at present have the capabilities required to execute Expeditionary Advanced Base Operations (EABO) as envisioned. The Naval Service must take immediate steps to strengthen its forward posture in the littorals through stand-in forces.

The Naval Services must develop and train a naval expeditionary force that is tailored to support stand-in forces within the adversary’s weapons engagement zone. A near-term approach doesn’t necessarily entail a departure from the three-ship Amphibious Ready Group (ARG) and associated Marine Expeditionary Unit (MEU). But new force packages that are better aligned with future missions and force structure will make for a more preferable interim solution. One solution is a set of stand-in force constructs that are complementary to current formations and fleet tactics – the Littoral Combat Team (LCT), the Littoral Combat Group (LCG), and Littoral Strike Squadron (LSS).

A naval expeditionary unit for stand-in forces would be comprised of multiple maneuver elements: embarked troops and their associated support, combatant vessels, and small craft. This is not intended as fully meeting the CMC and CNO’s desired end state with respect to LOCE or EABO. Rather, it is a bridging solution as the Naval Service endeavors to move toward a modern fleet.

It must be understood that the Littoral Combat Team (LCT) is an integral part of this concept as a bridge to future EABO. The LCT consists of Marine and naval forces deployed to key maritime terrain throughout partnered nations’ Economic Exclusion Zones (EEZ). These LCTs are essentially inshore weapons platforms and Forward Arming and Refueling Points (FARP). The LCTs perform the missions of Theater Security Cooperation (TSC), deterrence, and ultimately, disruption of adversary freedom of access to key maritime terrain. They are comprised of task-organized Marine forces, including electronic warfare, unmanned aviation systems, engineers and construction battalions, and missile batteries, to name a few.

Supported by host nation forces, the LCT would also lower the fleet’s signature, distribute its networked combat power, and reduce the requirement for L-class shipping. They must be virtually self-sufficient, leveraging a small, but diversified logistics element capable of contracting and advanced manufacturing, drawing upon pre-positioned stockpiles of all classes of supply and operating autonomous logistics resupply platforms. In their dual role as FARPs, LCTs extend the range and sortie generation of fleet rotary wing and unmanned aviation assets and their ability to penetrate an adversary’s weapons engagement zone.

Given the fiscal constraints of building the additional amphibious ships required to support the creation of multiple ARGs in the Pacific, a Littoral Combat Group (LCG) may provide a similar capability. A heavy variant of an LCG could be comprised of an L-Class ship and an Expeditionary Sea Base (ESB) Montford Point-class ship, supported by a composite Littoral Strike Squadron comprised of Littoral Combat Ships (LCS). These ships would embark the aforementioned littoral combat teams and their associated equipment sets. Augmenting these ships as UAS launch/recovery platforms could be Cyclone Class patrol craft and Small Water Plane Area Twin Hull (SWATH) vessels (-i.e. FSF-1), and support vessels/small craft, such as Navajo-class salvage ships, Mark VI patrol boats and Landing Craft, Utility (LCU) to aid in mobility/counter-mobility.

The purpose of these ships would be to distribute warfighting capabilities throughout the stand-in force’s area of operations, with their lighter drafts permitting in-shore mobility. Lighter options for LCGs would drop the L-Class vessels, relying on an ESB, four LCS (performing various composite warfare functions) and multiple smaller support/ inshore vessels (FSF/SWATH, T-ATS, LCU x2, Mark VI x4). The LCGs would, in turn, be supported by the ARG and carrier groups operating from outside the adversary’s WEZ. Survivability of these vessels within the WEZ is dependent upon coordinated efforts between the stand-in forces warfare commanders.

Current organizational tables for the Navy are heavily reliant upon the capital ships of the Expeditionary Strike Groups and Carrier Strike Groups to provide for the defense of the Amphibious Task Force and fleet, as well as strike missions in support of fleet action. The much-maligned LCS may be an answer to the rational hesitancy to risk cruisers within an adversary’s WEZ. While all naval vessels and small craft must be armed for close-in defense, (not to mention some limited offensive capability) they will still require surface and subsurface combatants to act in the role of picket ships. This Littoral Strike Squadron could be optimized with an embarked Marine Air Defense Integration System (MADIS), MAGTF Unmanned Expeditionary (MUX) UAS, and Extended Range Active Missile (ERAM) or Mine Warfare (MW) modules.

The LCS fits the role of power projection and LCG defense without the cost and risk that comes with building and employment of guided missile cruisers and destroyers. Common Unmanned Surface Vessels (CUSV), the Anti-Submarine Warfare Continuous Trail Unmanned Vessel (ACTUV), and Orca Unmanned Undersea Vessels (UUV), coupled with the MQ-8B Fire Scout would support LCS MW and Anti-Submarine Warfare (ASW) missions, respectively. By operating with a diversity of unmanned platforms and electronic warfare systems, this force “erodes an adversary’s advantage by complicating their surveillance and targeting.”4

A cursory glance at the U.S. Navy’s list of ships and small craft reveals a shortfall in capacity and capability to support the formation of stand-in naval forces. Investment in a Heavy LCG is not insignificant, requiring multiple ship types. Given the Navy’s shipbuilding program focus on carriers, DDGs, and SSNs, building toward these new force packages is not a likely course of action. Light LCGs, relying on ESBs, LCSs, and smaller support vessels and craft would undoubtedly be a more economical bridging option. Additionally, employment of the U.S. Coast Guard’s (USCG) Long Range Interceptor (LRI) 11 and Legend-class Cutter WMSL-758 in RIMPAC and PACIFIC BLITZ exercises demonstrated those platforms’ and crews’ relevance in littoral operations. The LRI-11 and WMSL-758 should be considered for future acquisition by the U.S. Navy and (more importantly) as a USCG detachment within the LCG, given the utility of the vessel’s hull form and the capability the USCG brings with respect to TSC, maritime policing, and low-intensity conflict.

A final question that confronts the Naval Service is who should invest and man small craft and connectors in support of stand-in naval forces. Traditionally, with the exception of the now-deactivated Marine Small Craft Companies and 31st MEU’s boat company, the Marine Corps has deferred to the Navy in the programming for and operation of small craft. Given the reliance of the LCTs on small craft for logistics and maneuver, the Naval Service would do well to revisit this situation to determine where efficiencies are to be gained (i.e. Royal Dutch Marine crews’ manning of surface connectors).

The Navy has been in this existential fight before in these very same seas.  “Tin Can Sailors” have disrupted a more powerful fleet due to the training and leadership of its crews, as well as the enemy’s uncertainty as to what sort of naval force they were facing. The LCG, with that in mind, is a purpose-built Tin Can Navy; an interim solution until such time as a more operationally effective fleet is fiscally possible. It gives the Fleet a forward presence in times of peace and leading up to conflict; the ability to be present and to compete within a contested maritime environment

As with any well-intentioned concept, additional discussion must be fostered to address the potentially costly training and sustainment of new force packages and force structure. Furthermore, significant analysis remains to wargame potential PRC operational and strategic reactions to coalition efforts, lest we overlook requirements to address likely adversary responses to this force design and employment concept.

Lt. Col. Roy Draa is a career infantry officer with 19 years of active duty service in the United States Marine Corps. He is currently stationed at Quantico Marine Corps Base with Training and Education Command (TECOM). He is a charter member of the TECOM Warfighting Society, the Commanding General’s working group that explores and evaluates future warfare concepts, applications in maneuver warfare and mission command in improving professional military education. These are presented in a personal capacity and do not necessarily reflect the views of the U.S. government.

3 thoughts on “The Next Stand of the Tin Can Sailors: Building a Stand-In Naval Force”