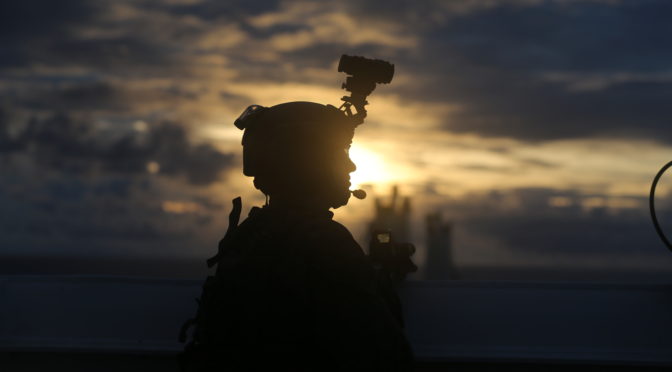 To their credit, these leaders have recognized that optimizing the Marine Corps for great power competition and operationalizing EABO will necessitate changes to not just doctrine and acquisitions but to the underlying force structure of the Marine Corps. The Commandant has declared that force design is “my number one priority.”1 To date we have seen calls for augmenting cyber and electronic warfare capabilities, continuing to expand the unmanned systems portfolio, adding small boats and riverine units or even absorbing capabilities currently residing in Naval Expeditionary Combat Command. In the CPG, Commandant Berger wrote:

“We must engage in a more robust discussion regarding naval expeditionary forces and capabilities not currently resident within the Marine Corps… We must ask ourselves whether it is prudent to absorb some of those functions, forces, and capabilities…”2

All are valid proposals, but they crash into a generally accepted assumption that the overall military budget will either be maintained at the current level or shrink in the years to come, what a Center for Strategic and International Studies report called the risk of “the lack of real growth in future budgets.”3

So how will the Marine Corps reconcile its wish list with projected budgets? With cuts. In his CPG, the Commandant made clear that he envisions a “leaner force structure, potentially fewer Marines, and a possible reduction in total resources” and that if “provided the opportunity to secure additional modernization dollars in exchange for force structure, I am prepared to do so.” But there was no specificity as to where the cuts could come from.4

Cuts should come from what the Marine Corps calls the Ground Combat Element (GCE), specifically the infantry community. This will be an unpopular argument that may be dismissed out of hand. The infantry has a large community of patrons at the senior echelons of the service and is considered the core of the Corps. Marines are taught early on that the total force supports Marine squads and rifle platoons at the tip of the spear. However, cutting force structure from infantry must be considered a viable route to fueling growth and investment in other capabilities that are more relevant to the future fight.

EABO is an often discussed, yet still classified future concept for the Marine Corps that was created in coordination with the Navy. According to the Corps’ official website:

Of the specific capabilities mentioned – ISR, coastal defense cruise missiles, anti-air missiles, FARPs, and logistics support to the fleet – none inherently require support from the infantry. And only one, coastal defense cruise missiles – would likely involve the GCE. This is not an exhaustive list of potential EABO capabilities, but it is telling – there is not a clear role for the infantry in EABO. In his guidance the Commandant was clear that capabilities that do not adequately support our future concepts do not have a bright future: “We must divest of legacy capabilities that do not meet our future requirements.”6

Some might argue that the infantry and GCE can provide security for important radars, FARPs or other expeditionary advanced base sites. However, per Marine doctrine, FARPs and air operation sites provide their own organic security.7 Additionally, planners envision expeditionary advanced bases to be located in allied or partner nation territory like Japan, South Korea, or the Philippines. All of these countries are more than capable of providing local security to U.S. forces if required, which is an ideal way to tie them into the EABO concept.

Without the prospect of large-scale amphibious assaults, ground operations, or coastal defense at the water’s edge – none of which feature in EABO – the Marine Corps’ resourcing of infantry and GCE units at current levels makes little sense. It must be noted that today’s Marine Corps is organized to support Joint Forcible Entry Operations with two Marine Expeditionary Brigades. But in the CPG the Commandant said this requirement was no longer a justification for current or future force structure, opening a path toward cutting the infantry.8

Others might argue that EABO is only part of the Marine Corps’ future and investments in the GCE are valuable across the total spectrum of operations the Marine Corps may be tasked with in coming years. They are correct – and Marine infantry have proved versatile over time in meeting the needs of the Corps. The Marine Corps may continue to be tasked with missions and “…other duties as the President may direct.”9 But it is in our interest as an institution to optimize for the specific future that we envision. The Marine Corps cannot prepare for every contingency, as the Commandant wrote in his guidance:

“We cannot continue to accept the preservation of legacy capabilities with little to no demand signal, or those that are only being retained in support of surge requirements associated with the least-likely, worst-case scenario.”10

If littoral operations and EABO are going to become the main effort for the Marine Corps, as appears to be the case, the Marine Corps will have to accept risk in parts of the organization in order to resource growth areas. There needs to be a frank discussion about where those cuts will come from. Alternatively, if the Corps is going to prioritize traditional, GCE intensive operations then the Corps need to anoint that vision in published plans and concepts.

Currently the Marine Corps deploys infantry battalions to Okinawa, Japan on a rotational basis as part of the Unit Deployment Program. While in Japan, the battalions fall under 4th Marine Regiment, which has a permanent headquarters in Okinawa. The 31st Marine Expeditionary Unit, while not part of the Unit Deployment Program, contributes another infantry battalion to Okinawa for several months per year. While deployed to Okinawa these battalions train much like they would back at their home stations in the United States, albeit with fewer resources and less support. They do have expanded opportunities for training with local Japanese Defense Force units and other regional partners.

These forces do not provide a significant deterrent to regional adversaries because the infantry battalions do not have relevant capabilities to most conflict scenarios. The infantry battalions do not have dedicated aviation assets for mobility or amphibious shipping like a Marine Expeditionary Unit would. They do not have the doctrine or the training to defend against an amphibious landing, and because of training restrictions in Okinawa they are unable to train and practice with their heaviest weapons. They are certainly a demonstration of U.S. commitment to the region, but cannot offer relevant capabilities that would be useful in a conflict scenario.

If the Marine Corps were to stand down the 4th Marine Regiment or shift it to the reserve component, while simultaneously ending the Unit Deployment Program in Okinawa it would give senior leaders significant room in the existing force structure to create whole new units – several thousand Marines, without increasing operational demands on remaining infantry units. It would also free up infrastructure in Japan and the United States to support these new units and capabilities.

Other options for cutting force structure in the Marine Corps could involve making cuts elsewhere in the GCE. The Marine Corps currently maintains two active-duty and one reserve tank battalion with M1A1 Abrams main battle tanks. Tanks can be extremely valuable in combat but have large sustainment footprints and are more difficult to deploy from landing craft and aircraft because of their extreme weight. They could be transferred to the reserves or divested. Historically, armored vehicles have played minor roles in the Pacific Theater of operations.

The Marine Corps currently has only one active duty HIMARS or rocket artillery unit (though another is planned).11 All of the other artillery units are cannon-based and employ the M777 155mm howitzer. These howitzers are advantageous because they are light enough to be transported by helicopter but would be relatively ineffective against ships and have only a fraction of the range of anti-ship missiles. If the Marine Corps is serious about investing in anti-ship missiles, divesting from units of cannon-based artillery would be one method to adjust force structure toward sea control.

The Corps could also target only one of the three Marine Expeditionary Forces (MEFs) for the divestment of legacy capabilities in line with regional threats and geography. The three MEFs do not need to be organized along the same lines for the same fight. If the Corps envisions III MEF as the most likely to execute EABO, then is should be targeted for divestments of the GCE and I and II MEF can perhaps maintain a more traditional structure.

Another option would be to divest wholesale from one or more support functions. Currently the Marine Corps relies entirely on the Navy for medical support – from doctors to the front-line corpsman, and also for religious support in the form the Chaplain Corps. Using these examples as a model the Marine Corps could shift to using exclusively Navy explosive ordnance disposal, intelligence, or engineers. Doing so would also further the goal of increasing naval integration between the Navy and Marine Corps.

The Commandant has already declared that the Marine Corps is no longer wedded to the Marine Air Ground Task Force (MAGTF) construct. Ending the centrality of the GCE in Marine task forces and reducing its presence will clear the way for more organizational experimentation. In a Marine Expeditionary Unit (MEU) the largest contingent is infantrymen from the GCE, where the formation is built around an infantry battalion. If that battalion is reduced in sized or removed from the structure it would open up hundreds of billet spaces in the traditional three-ship MEU/ARG for other capabilities. If Navy and Marine planners are worried about the size and expense of current L-Class amphibious ships posing a vulnerability, one way to shrink the ships is to start removing or distributing Marines. A prescient analysis of distributed, short take-off and vertical landing (STOVL) operations found that support requirements for these operations would quickly outpace the organic ability of an ARG/MEU to support them. One way forward would be to move the grunts off to make room for more aviation support personnel:

EABO will force planners to critically examine the contribution of personnel to their missions. Much like how in an air assault operation “Every butt must earn a seat,” is the Marine infantry going to earn a seat in EABO?

Ultimately, the Marine Corps needs to make hard choices about cuts in the near future and hopefully these choices will start to become apparent in the 2019 Integrated Force Structure Assessment. Current force structure and funding levels do not have room for the addition of new capabilities that will be essential in operationalizing EABO and preparing the Marine Corps for the future fight. The hardest part of implementing and operationalizing EABO will come only after it has become clear who the winners and losers of the new concept are. In an environment of limited resources and plateauing budgets new investments will have to come at the cost of cuts elsewhere. Officers and Marines who have developed their careers along specific tracks may be faced with the reality that their skills are no longer as relevant or valuable as those of their peers, but they may fight to maintain the status quo instead of to evolve. EABO is the right path forward for the Marine Corps, and senior leaders need to continue to push the concept forward by investing and divesting in the right places, including the infantry. Because of its size and relative lack of contribution to EABO, the Ground Combat Element and Marine infantry are the right places to start divesting to make room for the future.

6 thoughts on “Sacred Cows For What? Considering Force Structure Cuts to Marine Infantry”