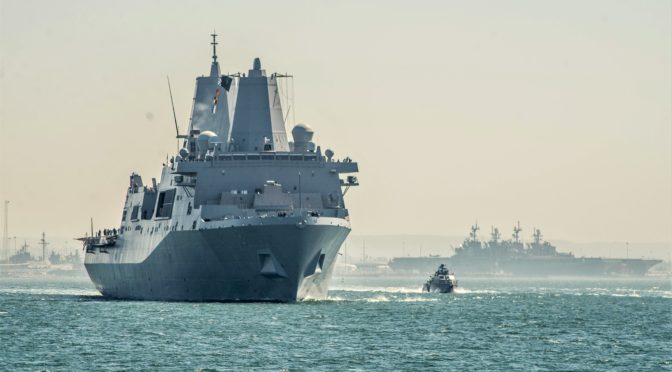 The U.S. Navy has perhaps the toughest problem among the U.S. armed services for planning long-term force structure. Navy ships and submarines are much more expensive and require far longer times to procure compared to the military equipment of the other services. As a result, Navy force planners must consider long-term time horizons to create the force structure the nation needs given the projected threat environment and operational conditions.

Due to large capital expenditures over many budget cycles, the Navy provides to Congress a 30-year shipbuilding plan usually once a year.1 But anticipating the future warfighting environment over the next 30 years is a difficult task involving considerable uncertainty. While force structure assessments (FSA) can mitigate uncertainty through a variety of techniques, significant risk remains. A candid discussion of uncertainty and how we can adjust as unexpected conditions evolve would boost the value of the FSA, and set the stage for how measures could be instituted to ensure the FSA remains resilient and adaptive.

Three sources of uncertainty comprise the most significant risk over the long-term time horizon. Uncertainty of how potential adversaries will increase and modernize their forces is perhaps the most challenging aspect. In a world of great power competition as acknowledged by the U.S. National Security Strategy and the National Defense Strategy, how great power competitors expand their capacity and capabilities is of paramount importance. Specifically, how the leadership of the People’s Republic of China (PRC) chooses to expand the People’s Liberation Army (PLA) is of upmost importance to the U.S. joint force. Accordingly, predictions of how the PLA Navy expands and modernizes is a chief factor for the U.S. Navy’s FSA.

The opaque nature of PLA budgeting and planning and the long-time horizon limits the confidence of force structure projections attempting to peer far into the future. Should the PLAN build and employ considerably more advanced platforms such as ballistic missile submarines and long-range strike cruisers over the next 30 years than the relatively low confidence level projections today suggest, the FSA will quickly be invalidated.

Another substantial source of uncertainty is understanding how a modern naval war between great powers will play out. Neither the U.S. Navy nor the PLAN have experienced the rigors of modern naval combat between highly capable systems and platforms. Our comprehension of how the conflict expands to include rivalry in the space and cyber domains and how the warfare environment is affected can best be described as educated speculation. The ability of each side to degrade or deny the other’s sensing and communication capabilities is highly uncertain in the face of determined resistance. Has the fundamental nature of warfare changed with the advent of increased firepower and other lethal capabilities, bestowing advantage to the defensive position, or have modern capabilities enhanced the ability of naval forces to offensively maneuver? How the fleet will fight will largely determine how the fleet is built, but myriad tactical dynamics of future warfighting remain unknown.

A third source of uncertainty relates to how evolving technology will affect naval force capabilities and the warfighting environment. Will proliferation of unmanned platforms and advancing artificial intelligence render the maritime environment transparent so that even U.S. submarines will find it difficult to hide? To the contrary, perhaps swarming drone decoys and sophisticated algorithms could distract and degrade sensors so to enable extended freedom of maneuver for naval forces. Will swarms of unmanned platforms become a lethal and persistent aspect during a war, or will they face extensive early attrition due to counter drone technologies so that their impact is initially significant but acute? How will developing advanced firepower such as hypersonic weapons and directed energy alter the vulnerability or protection of forces?

While the questions above do not have simple answers or may not be answerable at this time, there are steps analysts can employ to mitigate the risks of the unknown.

Acknowledge uncertainty. Confidence levels should be thoroughly discussed, and low levels of confidence should be clearly acknowledged. A thorough discussion of the uncertainty and unknowable factors we face will help later as adjustments are necessary.

Define adjustment triggers. The FSA should have established criterion and triggers that describe when and how its findings should be adjusted as uncertainty changes over time. For example, if today’s best prediction of the number of Chinese SSBNs becomes inaccurate in a few years as unanticipated construction occurs, the FSA could identify this as a trigger point to reassess force structure with respect to U.S. ASW and missile defense capabilities.

Advocate. After the next FSA there will be disagreement about the suitability of the shipbuilding goal, which currently stands at 355. Some will advocate for a greater number, but consensus can be found for the factors clearly calling for an adjustment. Continued, dedicated expansion of the PLAN in ways that are not predicted now, but are flagged by adjustment triggers, would provide justification for an increase in U.S. Navy investment and procurement. Audiences such as the U.S. Congress and the American public at large can be prepared for the implications as information is revealed over time. Then demonstration of facts can best advocate for necessary FSA adjustments.

Hedge. As the nature of warfighting evolves as well as the potential for new and developing technologies to make an impact, U.S. defense expenditures should aim to avoid missing a crucial development or dramatically misjudging the nature of future warfighting. This requires the continued development of expensive technologies to maintain an edge, even those that have not been as fruitful as anticipated, such as directed energy. In addition, material necessary for warfighting such as ammunition and fuel should be stockpiled in larger quantities and prepositioned forward as a relatively inexpensive means to compensate for an FSA that underestimates the opposing force and capabilities.

Expand to the Joint Force. The best FSA would account for the capabilities and forces of the Army and Air Force in addition to the Navy and Marine Corps. Navy and Marine Corps-only analysis is prone to myopically overlook the ability of other services to compensate for weaknesses or bolster strengths. A comprehensive assessment for the required capability and capacity of the entire Joint Force will result in the most efficient solution and avoid gaps or excess in key functions.

Through these measures the U.S. Navy and the Joint Force writ large could better align and adjust its force structure, and minimize the disruptive and deadly surprise that comes from when outdated force structure is finally thrust into war.

Jack McKechnie is a commander in the U.S. Navy and a graduate student at American University, School of International Service. The views expressed in this article are his own.

1. While the Navy also has plans for other platforms such as aircraft and unmanned vehicles or vessels, the shipbuilding plan receives the most focus due to  considerable higher cost per platform and longer time to build

One thought on “Incorporating Uncertainty into the Integrated Force Structure Assessment”