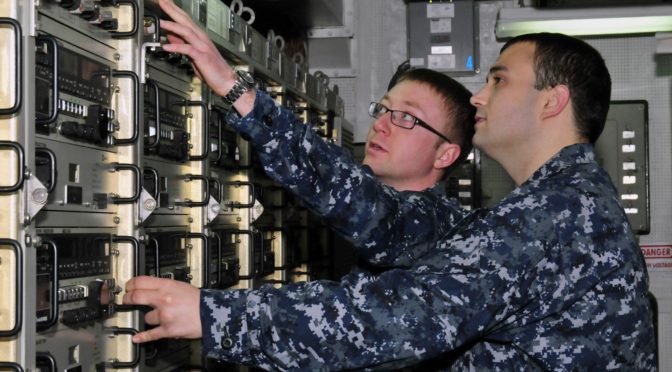 The Navy is pushing toward an IT future based on cloud computing that promises enormous benefits and can set the foundation for a future force shaped by emerging technologies. The incremental adoption of cloud services by the Department of the Navy (DON), other services, and private industry already holds much promise, but the stakes are high. Getting the cloud migration right can underpin revolutionary developments like artificial intelligence and give the Navy the advantage it needs for the coming decades.

What Is the Cloud

Cloud computing is the linking of computer systems and networks over the internet. Instead of storing all information and computer programs on physical hard drives in a single site, the cloud takes advantage of spare storage and processing capacity across widespread locations. This system allows the using agency – the DON – to only pay for the services it needs without maintaining large-scale IT infrastructure in numerous areas.

Cloud services offer many benefits to organizations which adopt them. The cloud helps to overcome physical information technology (IT) limitations, limitations on manpower, and overlapping and cumbersome small-scale contracting measures. Cloud computing is extremely cost-efficient for large organizations and reduces the organic cost of installing computer hardware and IT infrastructure. The lack of required hardware supports scalable operational requirements around the globe. Cloud services provide fast and responsive transfers of information which increases organizational flexibility. Since it connects all subordinate networks, cloud systems also support computing performance when and where it is needed while guaranteeing reliability from backups. Cloud-based networking can also support regular and timely comprehensive upgrades to security systems to better support the Navy’s cybersecurity needs.

The Navy demands extensive requirements from its cloud adoption. The naval services conduct a vast array of missions in diverse global environments. Naval platforms gather information from dozens of sensors and communications systems at any given second. Command and control networks facilitate effective fleet management and direction. The Navy can disperse its needs between organic cloud networks onboard deployed ships which then forward information to larger shore-based clouds whenever bandwidth and operations allow. For a scale comparison, the Navy collects new data equivalent to the Library of Congress – approximately 200 terabytes – every day. This number is increasing faster every year, and any cloud system must be able to accommodate the variety and velocity of this data collection.

Benefits of the Cloud

A major benefit of cloud computing for the Navy is the ability to combine disjointed information systems spread amongst various units. The integration of these networks in the cloud is necessary for the DON to harness the benefits of big data and machine learning. In effect, the transition to the cloud is the first step of many in the DON’s transition to the future of warfare and technology. This cloud infrastructure must not only be widely implemented, but optimized for data processing and proper use.

Other benefits of cloud computing for the DON are numerous. Cloud computing can allow departments to do more with less by supporting greater speed for administrative and technological processes (such as audits and inventories), all the while occupying fewer personnel. It also facilitates quicker access to and reconciliation of data between distant units which supports expeditionary operations and better coordination. These more efficient information transfers will increase commanders’ situational awareness both locally amongst squadrons or distantly between fleets.

Other militaries have already had success migrating to the cloud. The United Kingdom has implemented a “cloud-first approach” which mandates that all purchases of IT products and services must first be considered through the cloud. Private firms helped the Australian Department of Defence move various systems to the cloud, including its non-material procurement, material procurement, and other acquisition programs. This process involved linking 13 different, non-interacting systems into a transparent and interlinked procurement program accessible by all users.

Amazon Web Service (AWS), one of the largest cloud service providers in the U.S., already supports other government entities such as the intelligence community. The CIA spent $600 million migrating to the cloud in what former Principal Deputy Director of National Intelligence Sue Gordon called, “one of the best decisions we made.” AWS created its own “secret region” to support government needs across the full range of classifications, an offering which the Navy also would require. U.S. Air Force Special Operations Command saved $3.5 million in 2019 by transitioning to the cloud. Additionally, the National Oceanographic and Atmospheric Administration (NOAA) provides an example of how the Navy can benefit from cloud-based weather systems for more accurate research and forecasts.

The government has laid out four critical requirements that cloud services must meet to support operational units. Any cloud system must support all classification levels, must have a global reach, must be synced and interoperable with other government cloud initiatives, and, most importantly, must support the future needs of artificial intelligence and machine learning programs. The current steps by the Navy meet these requirements and promise substantial return on investment.

Current Steps Forward by the Navy

The DON has pursued cloud computing services over the past decade. Its Chief Information Officer (CIO) issued guidance in 2015 on the acquisition of commercial cloud services for the Navy’s various branches and commands. Some units like the Space and Naval Warfare Systems Center (SSC) Atlantic embraced the cloud and have pushed forward under Department of Defense (DoD) instruction to accelerate cloud migration. Its pilot programs involved multiple major cloud service providers like Microsoft and Amazon.

Last year the Navy awarded $100 million for commercial cloud service contracts as a preliminary step towards future cloud adoption. Earlier last summer, the Navy completed its largest cloud migration to date. The DON migrated its Enterprise Resource Program (ERP), its financial system of record, this past August in one of the largest cloud transitions in North American history. The program, which tracks over $70 billion annually and maintains half of the DON’s financial and logistics dealings and involves 72,000 users, took ten months to complete and paved the way for future large-scale naval IT conversions. The Navy also operates one of DoD’s only two cloud computing access points to transfer high-impact unclassified data to and from the commercial cloud, a bottleneck which the Defense Innovation Unit seeks to overcome.

An early cloud transition for logistics programs makes sense as a proven method for quick benefits. The Defense Logistics Agency (DLA) upgraded its educational systems to the cloud as an early test of large-scale cloud-hosting for sensitive information. U.S. Army Logistics Activity (LOGSA), which manages 40 million different data points daily, transitioned to the cloud to implement better analytics tracking cost-saving benefits. Data-driven maintenance is an additional area where the Navy stands to benefit in the near-term from moving to cloud-based management systems. The DON also employed an early cloud transition for its Fleet and Family Readiness Division. The Navy’s GovCloud system only maintained unclassified information but demonstrated the benefits of a cloud enterprise through its maintenance of 95 websites, 10 regional content management systems, and 113 mobile phone applications, delivering more than six terabytes of data every month.

Another major goal for the Navy’s cloud evolution is to establish a digital environment for rapid software development, testing, and implementation. This “Cloud-to-Edge” (CTE) environment could be employed on either individual ships or entire strike groups and allow the navy to adapt more rapidly to changing environments. One key component of the CTE was successfully tested last year with the AEGIS system on the USS Arleigh Burke, USS Ralph Jonson, and USS Thomas Hudner which developed and deployed software updates within 24 hours.

The Bureaucracy Gets a Vote

Bureaucratic decision-making has already played a major role in the Navy’s cloud transition and will likely lead to additional changes in the future. In 2015, the Navy decided to consolidate cloud-leadership within its Program Executive Office for Enterprise Information Systems (PEO-EI). Two years later, it divided that authority between eight functional community commands. The DON intends to pursue its primary cloud enterprise contract for 95 percent of the naval services’ needs. These eight other commands – including Navy Installations Command and Military Sealift Command – will be allowed to establish individual cloud networks for mission-specific needs and will oversee their units’ transitions and readiness for the cloud implementation. The preparation of commands and systems to migrate to the cloud will be vital in facilitating the DON’s goal of a total cloud migration by 2021.

Overlapping strategic guidance will require daft navigation by DON leaders. DOD officials issued strategic guidance in February to provide some cohesion and direction to the various cloud processes currently underway amongst the services. The Director of Naval Intelligence (DNI) issued its own Cloud Computing Strategy which, if naval intelligence units are to utilize the full assets of the intelligence community, the DON will need to adopt (at least on a select basis).

The DOD and the services have knocked heads over cloud implementation throughout this period of change. Despite the DOD’s push for an overarching, large-scale cloud under the JEDI program, individual services and departments will continue operating their multiple clouds already in place. In total, DOD already spends more than half a billion dollars on cloud technology every year, and the department will continue working on new ways to integrate service-specific clouds with DOD enterprise clouds.

Inspector General investigations and reviews by the Secretary of Defense will also likely alter the path forward for the Navy’s cloud adoption in the coming years. In October, DOD announced it awarded the JEDI contract to Microsoft. The contract has a potential period of 10 years and the total payments could range from $1 million to $10 billion. A single-source contract with such potential has sparked significant backlash from other competitors. Oracle is suing the federal government for a third time. Amazon announced a challenge soon after. The impact upon the Navy from such developments is unclear for now, though they will certainly will affect cloud developments over the coming years.

The current transition is only the latest example of the difficulties faced by the DON as it adopts major projects for the next era of warfare. Similar challenges accompany every major change in naval technology. Future administrative battles over artificial intelligence, unmanned vehicles, and advanced weapons like hypersonic missiles will inevitably ensue, but the cloud will be the link which enables their effective application. The Navy cannot afford to get it wrong.

Christian Heller is a graduate of the U.S. Naval Academy and the University of Oxford. He currently works as an officer in the U.S. Marine Corps, and can be followed on Twitter @hellerch.