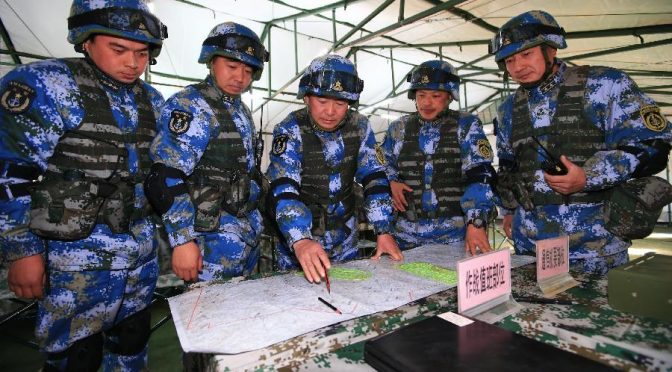 This article originally featured on the Jamestown Foundation’s Chief Brief. Read it in its original form here.

Editor’s Note: This is the first part of a two-part article discussing organizational reforms and evolving missions for the PLA Navy (PLAN) Marine Corps. The first part focuses on the growing order of battle for the PLAN Marines. The second part, which will appear will focus on the creation of a service headquarters for the PLAN Marines, and their expanding training for expeditionary warfare and other missions. Taken as a whole, this two-part article provides significant new information and analysis to update the December 3, 2010 China Brief article titled “China’s Marines: Less is More.”

On August 16, 2018, the Department of Defense Annual Report to Congress: Military and Security Developments Involving the People’s Republic of China 2018, reported that “One of the most significant PLAN structural changes in 2017 was the expansion of the PLAN Marine Corps (PLANMC).” The PLA Marine Corps (中国人民解放军海军陆战队) has historically been limited in terms of personnel, geography, and mission—with a primary service focus on amphibious assault, and the defense of outposts in the South China Sea. However, under currently estimated plans for service expansion, “by 2020, the PLANMC will consist of 7 brigades, may have more than 30,000 personnel, and will expand its mission to include expeditionary operations on foreign soil.”1

The expansion of the PLANMC, which commenced in April 2017, is an important element of reforms to the PLA’s operational forces. For the past two decades, the Marine Corps consisted of only two brigades, the 1st and 164th Marine Brigades (each estimated to number from 5,000 – 6,000 personnel) assigned to the South Sea Fleet stationed in Zhanjiang, Guangdong. After recent reforms, the number of brigades now amounts to a total of eight, with four new Marine combined arms brigades, a Special Operations Forces (SOF) brigade, and the core of a shipborne aviation (helicopter) brigade added to the previously existing two brigades. The four new combined arms brigades were formed out of units transferred from the Army, while the SOF and helicopter brigades were created from standing Navy units. A corps-level headquarters for the Marine Corps also has been identified. Though the Chinese government has not officially explained these developments, this new structure probably amounts to a total of up to approximately 40,000 personnel distributed among eight brigades at full strength.

The expanded Marine Corps, supported by Navy long-range sealift, likely will become the core of the PLA’s future expeditionary force. Training that began in 2014 further indicates that the eventual objective for the Marine Corps is to be capable of conducting operations in many types of terrain and climates – ranging beyond the PLANMC’s former, and continuing, focus on islands and reefs in the South China Sea. The manner by which the force has expanded, however, suggests that the PLA leadership was not motivated by an immediate need for a larger amphibious capability; rather, it appears to be consistent with several new missions undertaken by the Chinese military over the past decade that have provided impetus for the addition of new Marine units. It will likely take several years for all of the Marine Corps’ new units to reach full operational readiness as measured by personnel, equipment, and training.

After “below the neck” reforms and restructuring implemented throughout PLA in 2017, Marine units are now found along China’s eastern seaboard from Shandong in the north, to Fujian and Guangdong in the east opposite Taiwan, to Hainan in the South China Sea. In northern Shandong, a former Army motorized infantry brigade of the old 26th Group Army has been transformed into a new Marine brigade (Jiefangjun Bao Online, September 30 2017). On Shandong’s southern coast, a second new brigade has been formed from what likely was a former Army coastal defense regiment located near Qingdao (Qingdao Television, February 12 2018). Further south, an Army coastal defense division stationed around Jinjiang, Fujian was the basis for a third new brigade that remains in that same locale; and may also have provided manpower and resources for a fourth new brigade that recently moved to Jieyang in eastern Guangdong province  (Anxi, Fujian Government website, August 1 2017; Jieyang News, August 17 2018). Although the PLA has not widely publicized either the creation of these new brigades or their true unit designators, the emergence of photos and new military unit cover designators associated with the Marine brigades both suggest a 1st through 6th brigade numbering scheme.2

As the new Marine brigades are being organized and equipped for their new missions, the two previously existing brigades also appear to have been reorganized. Most significantly, to streamline their chain of command, the former amphibious armored regiment headquarters appear to have been eliminated: command is now passed directly from brigade level to the newly established combined arms battalions (similar to the Army’s brigade command structure). Marine combined arms battalions are distinguished between amphibious mechanized and light mechanized combined arms battalions. Some, if not all, Marine brigades also have, or will likely have, units trained for air assault operations (Jiefangjun Bao Online, December 10 2017), and will be reinforced by operational support battalions.3

It is likely that in coming years older equipment will be retired and all Marine units will be issued new amphibious vehicles—such as the tracked ZBD05 Infantry Fighting Vehicle (IFV), tracked ZTD05 Assault Vehicle, PLZ07 122mm Self-Propelled Howitzer, the eight-wheeled ZBL09 IFV, the eight-wheeled ZTL11 assault vehicle, and the Mengshi Assault Vehicle. (The latter three vehicles have been observed deployed to the Djibouti Support Base). Some reconnaissance units are also receiving light 8×8 all-terrain-vehicles for terrain that is inaccessible to larger vehicles (Chinaso.com, April 9, 2018).

In total, the Army probably transferred over 20,000 personnel to the Navy’s new Marine units, while retaining its own amphibious capability. The Army’s two former amphibious infantry divisions—one previously stationed in the Nanjing Military Region near Hangzhou and the other in the Guangdong Military Region near Huizhou—were both transformed into two combined arms brigades each, while keeping their amphibious weapons and capabilities. A fifth former amphibious armored brigade also was converted into a new Army combined arms brigade located in Fujian. The decision to maintain these amphibious units in the Army reflects that service’s continued role in building capabilities to deter further steps toward Taiwan independence—one of the missions of foremost importance to the PLA.

Had the senior PLA leadership perceived the need to increase rapidly the Navy’s amphibious capacity, it could have decided to transfer to the Marine Corps those existing Army amphibious units, all of which were equipped and trained for assault from the sea. But by transforming a motorized infantry brigade and multiple coastal defense units—none of which were outfitted with amphibious equipment, nor trained extensively in amphibious operations—the PLA leadership understood that it would take multiple years for these units to be equipped, and even more annual training cycles before they would be fully trained to undertake amphibious operations. So, while the Marine Corps has been expanded in size, its actual amphibious capabilities will increase gradually over the next several years.

The new Marine special operations force (SOF) brigade has been formed out of the Navy’s existing SOF Regiment stationed in Hainan, which includes the Jiaolong (“Dragon”) commando unit (China Central Television, December 12 2017). The former Navy SOF Regiment’s missions and capabilities overlapped with that of the Marine Corps, and therefore their transfer is a logical evolution as the Marine Corps expands. Eventually, the new brigade will likely number approximately one thousand personnel more than the old regiment (estimated to have been about 2,000 strong). Some of those personnel may have been transferred from the 1st and 164th Marine Brigades’ structure, each of which probably included SOF elements in their former reconnaissance battalions. Of all the new Marine units within the expanded force structure, the SOF Brigade currently is the most combat ready.

The 2018 DOD report on the Chinese military also noted the creation of an independent aviation capability for the PLA Marines, stating that the expanding PLANMC “may also incorporate an aviation brigade, which could provide an organic helicopter transport and attack capability, increasing its amphibious and expeditionary warfare capabilities.”4 The new Marine Shipborne Aviation (helicopter) Brigade apparently has been built out of elements from all three PLAN independent air regiments (Weibo, January 27 2018). These regiments have been busy since 2009, provided the aircraft for 15 of 30 of the Navy’s deployments to the Gulf of Aden escort mission (PLA Daily, July 16 2018).

Currently, the new Marine helicopter unit likely has considerably less than a full contingent of aircraft compared to an Army Aviation Brigade, which when fully equipped probably consists of over 70 helicopters. The Military Balance 2018 estimates the Navy’s entire helicopter fleet at slightly over 100 aircraft, with about half being transport helicopters—while the others are anti-submarine warfare, early warning, and search and rescue aircraft needed to support the rest of the Navy’s operations.5 Heretofore the Navy apparently has experimented with only a few armed Z-9 helicopters (People’s Navy, July 31 2012). Until additional attack helicopters are added to the force, as a stop gap measure it would be possible for the Army to temporarily assign a few of its attack helicopters to the Marines to assist in training and doctrine development for amphibious operations. Thus, it is likely that it will take several more years to add additional transport and attack helicopters and train the pilots and crews before the new Marine helicopter brigade is at full strength and combat ready.

This article will continue in the next issue of China Brief, with “The Chinese Navy’s Marine Corps, Part 2: Chain-of-Command Reforms and Evolving Training.”

[2] Military unit cover designators (MUCDs) are serial numbers (consisting of five digits) employed by the People’s Liberation Army to identify specific military units, and are frequently employed in official communications in the place of the true unit designators.