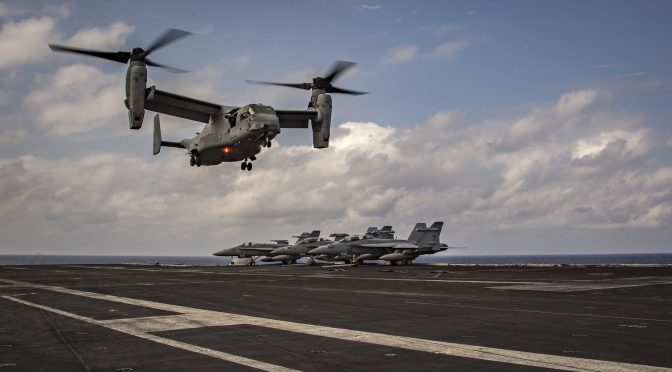 At 0830 Monday morning “BREAKING NEWS” banners start flooding cable news broadcasts, home pages, and Twitter feeds, but the headlines are not all telling the same story. One network reports a British-flagged crude oil tanker suffered a catastrophic explosion in the Strait of Bab el Mandeb, the critical chokepoint just south of Yemen through which nearly all maritime commerce flows between the Middle East and the Western World. Initial reports point to a naval mine strike. Separately, various websites are reporting heavily armed military vehicles and masked troops with no flags storming an Eastern Turkish town. Meanwhile, Twitter is erupting with the hashtag #WarWithChina after Chinese military officials claimed responsibility for the downing of a U.S. Navy reconnaissance plane in the South China Sea, saying the aircraft had violated its territorial airspace.

As the U.S. military’s top brass gathers around a conference table in the Pentagon a question is being muttered around the room before the Secretary of Defense steps in. It’s the same question many are probably asking themselves at home in their living rooms and kitchens: “Can this really be happening?”

Thankfully this is a purely hypothetical “Bad Day,” but who can say that some nightmare scenario like the one described above will not occur someday? Similar events have independently taken place in the past and conditions exist today for history to repeat itself. In fact, the multitude of regional conflicts affecting the U.S. and its allies today makes it more likely that multiple trigger events will occur near simultaneously. Not through some coordinated, multi-pronged attack from an Axis of Evil, but rather because America has so many potential adversaries and they don’t tend to de-conflict their calendars. As threats to U.S. national security and interests continue to proliferate, the Bad Day Scenario described above becomes increasingly likely.

As one might expect, this is not the first attempt to consider the implications of a worst case scenario for the Navy. In his article “The Hunt for a Small Surface Combatant,” Dr. Norman Friedman described a Navy briefing entitled “A Bad Day in 2003” which examined multiple independent crises in the wake of 9/11 and the wars in Iraq and Afghanistan. As in today’s scenario, one obvious answer was the Navy needed more ships. Back in 2003, the focus was on the new Littoral Combat Ship (LCS) with its high speed, modular, and (supposedly) low-cost design. But the focus today should be on fleet design, not ship design. No matter how you cut it, the Bad Day Scenario would be difficult to address for even the most advanced navy in history. A solution will not be found simply in fielding a new type of ship or by building more ships.

This series will consider the Bad Day Scenario, how the Navy could respond to such a challenge today, and what steps it could take to be better postured to respond in the future. Examining emerging technologies and operational concepts to respond to such a scenario reveals opportunities to make the U.S. Navy even more capable and lethal in the future. These insights could be applied every day, not just in times of crisis, making more common scenarios all the more manageable.

If the Navy had to Fight Tonight

If we woke up to the Bad Day Scenario one day the first challenge would be to verify the accuracy of the news reports. Even if the U.S. Government had its own intelligence to corroborate, would the events merit a military response? Against whom? If the decision were made to utilize military power, employing the Navy would be an ideal response . The wheels could be set in motion quickly, but leaders would still retain decision space if a non-military solution could be achieved. Still, setting the wheels in motion would not be easy. Under the Navy’s traditional force structure and operational patterns, responding to the Bad Day Scenario would involve complex, improvised planning and re-coordination, incurring great cost and risk to current and planned operations.

As multiple independent crises break out could the Navy deploy or reposition these assets to several separate regions at the drop of a hat? Possibly, but it would involve more than a little luck. The trigger events suggested above occurred in three different military theaters – the oil tanker struck by a mine in the Central Command (CENTCOM) area of responsibility (AOR), the attack on the Turkish town in the European Command (EUCOM) AOR, and the downed aircraft in the Indo-Pacific Command (INDOPACOM) AOR. One should look at how the Navy might respond to the Bad Day Scenario if it had to use the assets it has today or, as many military commanders like to say, “fight tonight.”  The Navy would likely default to applying its premier force packages – Carrier Strike Groups (CSG), Amphibious Readiness Groups (ARG), Expeditionary Strike Groups (ESGs) and fast attack and guided missile submarines (SSN / SSGN) – to the maximum extent possible.  A deployed CSG or ARG would often have to be in the right place at the right time. Forces in port would need to be in the right phase of the training and maintenance cycles in order to be primed for a surge.

The Pacific Fleet would clearly respond to Chinese aggression with its assigned CSG, but even if PACFLT could spare a CSG for CENTCOM or EUCOM it could take days to weeks to respond simply due to distance. After 9/11, the Navy began continuously deploying at least one CSG to CENTCOM, and occasionally two during times of heavy tension. But times have now changed. In 2015, for the first time in eight years the Navy suffered a gap in its CSG presence in the CENTCOM AOR, citing a strain on resources. With the advent of Dynamic Force Employment, an innovative but nascent approach to more agile deployments, it will soon be more noteworthy for a CSG to be stationed in the Middle East than not. Even with Dynamic Force Employment  it stands to reason the Navy would still fall back on a more traditional deployment model.

Even if we assume CENTCOM has a CSG at its disposal, could it respond to the incident in Turkey, a NATO ally whom the U.S. is sworn to aid through a mutual defense agreement? Intelligence reports and common sense could point to Russia as the faceless aggressor, and there are almost always Russian naval forces operating in the Black Sea and Mediterranean. Yet, if the U.S. decides to shift the CSG to the EUCOM AOR to deal with the higher-end threat, the carrier and her escorts still have to get through the Strait of Bab el Mandeb. The latest reports indicate the tanker that exploded in the strait was struck by a floating mine, and Houthi rebels in Yemen have already proclaimed their ability to close the strait. The risk to a CSG could be unacceptable. While the Navy is deciding how to hold a Russian naval force at risk until a second CSG can surge deploy from the East Coast (days? weeks? months later?), the international community is clamoring for the U.S. and its allies to clear the strait so vital commerce can continue unmolested. As national leadership tries to balance these concerns, the limits that stem from force structure and potential combat operations would shape options for employing the Navy.

A New Navy Ready for Surprise

No doubt the Navy would eventually respond to the Bad Day Scenario with today’s force structure, but it could incur significant cost in terms of money, time, relationships, and strategic objectives. The Bad Day Scenario would be difficult for today’s Navy to address, but emerging trends in technology, management, and operational concepts can present a new option for the Navy: a disaggregated, lethal, and resilient fighting force that can turn a bad day into an unparalleled triumph.

3 thoughts on “The Bad Day Scenario and Shaping the Navy for Global Responsiveness, Pt. 1”