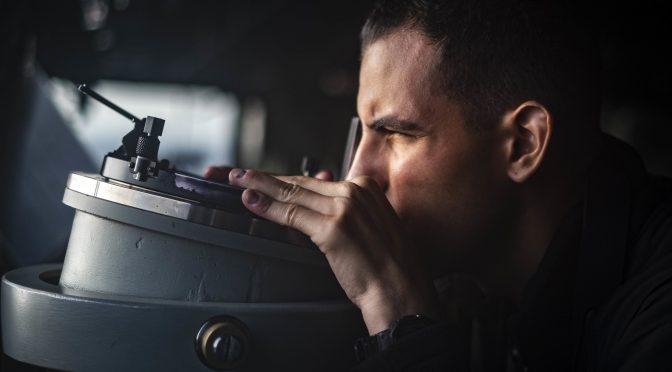 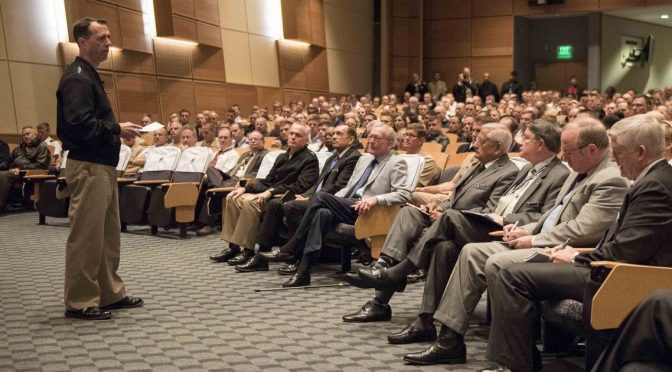 Chief of Naval Operations Admiral John Richardson’s recent decision to dissolve the long-running Strategic Studies Group (SSG) has prompted questions regarding the group’s recent viability, and whether it has made measurable contributions to naval strategy or national security. The answers to these questions are debatable to be sure. The real questions to ask are does the U.S. need mid grade and senior uniformed naval officers to think seriously about naval strategy? Should that “strategy” be something more than mere platform numbers, 30-year shipbuilding plans and associated budgets? What processes best inform and support generation of usable strategy, and how can Navy uniformed personnel, civilians and supporting contractors best support a strong, 21st century U.S. Maritime Strategy. An SSG that is returned to its 1980’s roots is the best process to achieve that goal.

The SSG was founded by CNO Admiral Thomas Hayward in 1981 with the specific mission of supporting a new era of strategic thinking by uniformed naval personnel in how to counter the rising Soviet Navy. A short review of the works of John Hattendorf, Peter Swartz, and John Hanley details the SSG’s significant influence on the development of naval strategy in the 1980’s. The efforts of the SSG were crucial to making the Maritime Strategy work at the operational and even tactical level of execution. It was a “disruptive” organization in that it had direct access to every senior officer in the Navy cosmos of that era. It had a number of innovative individuals within its ranks who later made flag officer rank. This organization was one where the people were as much the product as the concepts they created.

The SSG’s success was perhaps based on its direct association with the 1980’s era Maritime Strategy. The conditions for the SSG’s work and its own charter have considerably changed since the 1980’s. The Cold War ended in 1991, and with it the focus on defeating a global opponent. CNO Admiral Mike Boorda changed the SSG’s charter in 1996 to a focus on “revolutionary naval warfare concepts” rather than “Grand Strategy.” The group is now larger, more “joint” in construct and includes more junior personnel. Perhaps this is the wrong mix for supporting strategic thinking and development?

The SSG may not now seem to be as working well because it does not have a similar grand strategic construct to guide it it as it did in the 1980’s. In his 1990 Senate Armed Services Committee hearings, CNO Admiral Frank Kelso said a nation “didn’t need a strategy if it did not have an enemy.” The Maritime Strategy was soon placed “on the shelf” and was never really replaced. White papers such as “From the Sea” and more detailed concepts such as the 2007 and 2015 Cooperative Maritime Strategies have appeared, but none are in the same league as the 1980’s Maritime Strategy, a concept described by former Dean of Naval Warfare at the Naval War College Barney Rubel as one that could used as a “contingent warfighting doctrine.”

The disestablishment of the SSG is also, in effect, a dismissal of the efforts of the U.S. Naval War College; the home base of the SSG since its commission in 1981. The SSG was originally anchored to the War College to physically remove its members from corrosive Washington D.C. politics and to leverage the traditional capabilities of the College as a center of strategic excellence. Is the Naval War College now just another Joint Professional Military Education (JPME) degree production location? This decision seems to entirely separate the War College from its traditional role as a center of deep strategic naval thinking. Is it really so difficult and costly to move a dozen Commanders and Captains to Newport, as the 1980’s-era SSG did, so that they can think about big picture ideas without the usual distractions inherent in basing them in the National Capitol Region (NCR)?

The death of the SSG may be indicative of a larger lack of historical self-examination by naval leaders when making significant strategic decisions. The 2003-2012 process where the surface Navy closed the basic training school for new Surface Warfare Officers (SWOSDOC) at Newport, RI, tried to replace it with computer-based training and then subsequently returned to schoolhouse training could have been avoided had people looked at why the surface warfare school training program was instituted. New technology and a desire for greater professionalism caused ADM Zumwalt to implement a more regimented training program for surface officers. It was recognized that the previous, “journeyman” training program of the 1950’s and 1960’s was not sufficient to provide operators for then new ships like the DD 963 class, or deal with the increasing complexity of surface warfare. Those same conditions were in play in the early 2000’s as the fleet decreased in size, but was beset with greater responsibilities, made greater use of commercial off the shelf (COTS) material, and was developing whole-ship computing environments through programs like “smart ship” and IT21. In killing SWOSDOC, the Navy in effect steamed over its own towline and needlessly weakened its junior surface warfare training program. Sadly, the dissolution of the SSG may be following a similar pattern to that of the basic Surface Warfare Officers School. Excellence in a process has become more important than the product that is created.

The Navy seems to be groping again toward a concept of real geopolitical strategy as it did in the 1970’s. The 2015 Maritime Strategy is a step in that direction. The 1991-2010, “strategy” of 30-year shipbuilding plans, force structure, and budget management is no longer sufficient for the current environment that again features peer/near peer competitors in addition to non-state actors. The Navy needs uniformed personnel (preferably with a defined career path such as CNO’s operations analysts) to examine and recommend grand strategy. The global maritime battlespace has always made naval leaders deep strategic thinkers. The other services do not think along the same geographic lines. The U.S. has no strategic land frontier such as the Franco-German one of 1870-1945 where the Army might build grand strategy. The Air Force alternately operates in support of operational Army requirements or ignores geography altogether in its strategic bombing efforts.

The post 1986 Goldwater Nichols era of geographically isolated combatant commanders “drawing lines in the sea” and overly focused on land-based events disrupted the ethos of strategic naval thinking. Naval leadership must support the idea of the naval officer as a strategic thinker. Sadly, dissolution of groups like the SSG makes this more difficult to achieve. The Navy seems to have returned to the conditions of 1981 when incoming Secretary of the Navy John Lehman said that naval officers “did not do strategy.”

There is hope, however, to correct these deficiencies within the CNO’s “Design for Maintaining Maritime Superiority.” It states that, “history should be studied so that old lessons do not have to be relearned.” History suggests that the SSG in its pre-1996 format provided excellent support to the creation and implementation of the Maritime Strategy of the 1980’s. Learning-centered technologies, simulators, online gaming analytics and other tools not available in the mid 1980’s could further expand the reach and impact of 22 mid grade officers working on big picture ideas in the relative quiet of Newport. Such an organization for a new SSG would do much to maximize combat effectiveness and efficiency. It could be a team effort across the Navy’s strategic enterprise and would do much to reinvigorate an assessment culture and processes. An SSG that returns to its pre-1996 roots and adopts the best practices as recommended by “high velocity learning” can have as great an impact in building 21st century maritime strategy as did the SSG of the mid 1980’s.