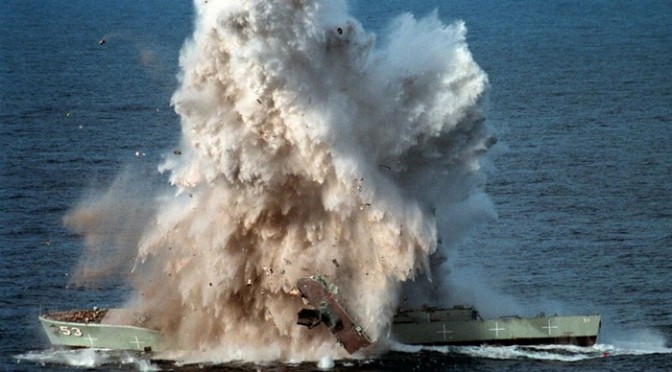 Chief Pentagon Weapon Tester Dr. Michael Gilmore remains fundamentally dissatisfied with the survivability of the Navy’s littoral combatant ship (LCS) and its upgraded follow-on, the small surface combatant (SSC). In an emailed statement described in a January 8th Bloomberg article, Dr. Gilmore stated, “Notwithstanding reductions to its susceptibility” compared with the design of the first 32 ships, “the minor modifications to the LCS will not yield a ship that is significantly more survivable.” It remains to be seen, however, how the Navy can improve the other legs of the “survivability triangle” on a hull of 3000 tons displacement and less than 425 feet in length. Small ships have been historically unsurvivable. Modern small warships are not in any way the equivalent of the World War 2 predecessors. Every warship is a compromise in armament, endurance, speed, and survivability. This is especially true of the LCS, as its modular operational profile demands absolute adherence to weight limitations.

Small warships are historically unsurvivable in combat. They have a shorter floodable length, reduced reserve buoyancy and more likely to be affected by fire and smoke damage than larger combatants. In both World Wars, losses in ships below 3000 tons in displacement far exceeded those of larger vessels. In World War 2, for example, the U.S. lost a total of 71 destroyers and 11 destroyer escorts; all under 3400 tons displacement and less than 400 feet in length. By comparison, only 23 larger ships were lost. Part of that figure is undoubtedly due to their operational employment, but in simple terms of engineering and physics, larger ships are inherently more survivable than their smaller counterparts.

There are stories of small combatants, such as the famous Fletcher class destroyer, surviving severe damage and yet remaining capable of inflicting damage on opponents. This history perhaps influences the opinions of those who believe small warships can somehow be made more survivable than the LCS or the SSC. Today’s weapon systems such as the 57mm gun on the LCS and SSC are much more fragile than the 5’38 caliber guns found on most U.S. Navy small combatants in the Second World War. Gun mounts became lighter and unarmored in the Cold War as the expansion of radars and mast-mounted communications equipment, among many improvements, forced warship designers to adopt lighter equipment to maintain ship stability. Current gun mounts are no longer manned to allow for a backup capability in the event of damage to centralized fire control capabilities. Many commercial off the shelf (COTS) components currently in use aboard Navy warships are much more fragile and more difficult to repair under battle conditions.

The crew size of a modern small combatant is also significantly smaller than its Second World War cousins. An LCS has a base crew of 90, with the capability to accommodate more personnel for mission modules. SSC would presumably have a similar complement. The Fletcher class destroyer had a crew of 273 and later wartime destroyers had over 300 men assigned. Crew sizes in present warships are likely to decrease in the wake of greater automation and a desire to reduce personnel costs. These additional crewmen allowed for manual weapons operation and damage control vital to the survivability of the ship. In short, comparisons with past small combatants are not an effective means to measure the survivability of the LCS or SSC.

Improving recoverability is equally difficult. The Navy defines it as “A measure of the capability of the ship and crew, after initial damage effects, whatever the cause, to take emergency action to contain and control damage, prevent loss of a damaged ship, minimize personnel casualties, and restore and sustain primary mission capabilities.” SSC is supposed to have additional armor protection, but given the weight restrictions of the LCS class, it is doubtful this will be anything beyond splinter protection. The small crew size will also limit the sort of manual-intensive damage control the U.S. Navy practiced in World War 2 and the Cold War. Installed, automated damage control systems offer some relief, but if damaged or destroyed in the first attack, they will likely be ineffective. Given all of these factors and their effect on a small ship with a small crew and little spare weight for improvement; it seems impossible that the Navy will ever reach Dr. Gilmore’s survivability demands for either the LCS or the SSC.

Every warship is a compromise of capabilities and limitations on a hull of a given size. The Navy has determined that the LCS and eventually the SSC will fulfill very specific missions on the hull size it selected during initial LCS design. Dr. Gilmore’s survivability demands on the present LCS hull are respectfully unrealistic. A larger vessel such as the Spanish Navy’s Alvaro de Bazan class frigate or its Norwegian or Australian cousins may be able to support increased survivability, but such a vessel would be inherently more expensive. A traditional frigate is also not what the Navy desired when it sought a replacement for the aging mine countermeasures and patrol ships, as well as the retiring Perry class whose dated missile capabilities were removed starting in 2003. LCS and SSC are simply not as survivable, as the Navy currently defines this term, as larger combatants due to physical constraints, smaller crew size, and fewer installed active and passive defense systems. It is unreasonable to demand that they meet a higher standard on the current hull.