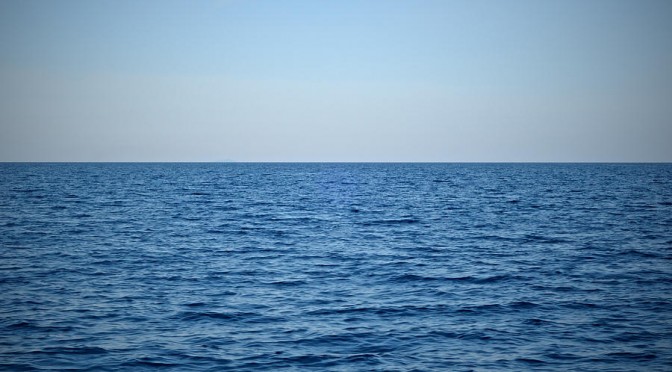 The US Navy recently announced that it successfully converted sea water into fuel and that it used it to fly a model plane. The aim of this technology is, of course, to give ships a self-sustaining power source and to make the Navy less dependent on fuel imports.

US Navy Vice Admiral Philip Cullom, declared the project to be “a huge milestone for us. What is just absolutely revolutionary about [this technology] is that, if you no longer have to worry about where that oiler is, you remove so much of the vulnerability that we have at sea.”

According to the Department of Defense, the ability to harness this new technology would allow ships to always be operational and eliminate the need to refuel at sea.

Indeed, it would prove very helpful in time of conflict: the vessel would not spend time away from the mission by returning to land to re-fuel, which is particularly helpful when surrounded by hostile forces. Furthermore, fuel supplies constitute a good target during conflicts.

Turning sea water into fuel: how does it work?

Seawater is a very attractive energy source, since it contains much higher concentrations of CO2 than air. And, obviously, it is very abundant. The new technology developed by the Navy uses a gas-to-liquid process, which at the same time recovers carbon dioxide (CO2)  from seawater and concomitantly produces hydrogen (H2), the building blocks of hydrocarbons. Dr. Heather Willauer, a research chemist at the Naval Research Laboratory (NRL), explains the chemical process: “Using an innovative and proprietary NRL electrolytic cation exchange module (E-CEM), both dissolved and bound CO2 are removed from seawater at 92 percent efficiency by re-equilibrating carbonate and bicarbonate to CO2 and simultaneously producing H2. The gases are then converted to liquid hydrocarbons by a metal catalyst in a reactor system.” First, the CO2 and H2 are converted into unsaturated hydrocarbon starter molecules called olefins using an iron-based catalyst. Next, these olefins are converted into a liquid containing larger hydrocarbon molecules with a carbon range suitable for use in jet engines by polymerization.

While the Navy successfully tested this new technique on a model aircraft, it will require time and an enormous investment from the American government before the Navy is able to solely use salt water as fuel. Regardless, Dr. Willauer is very optimistic:  “This is the first time technology of this nature has been demonstrated with the potential for transition, from the laboratory, to full-scale commercial implementation.” According to her, this technology could potentially produce jet fuel which may only cost approximately three to six dollars per gallon.

Furthermore, the team claims that its technology removes CO2 at 92% efficiency, which is far superior to previously developed techniques for CO2 recovery from seawater. It also declared that it can convert about 60 percent of the extracted gases into hydrocarbons which can then be processed into jet fuel.

Fossil fuels are currently the only obvious energy source capable of powering the system. However, coupling this system with a renewable energy source that drives CO2 recovery could potentially allow this process to be very sustainable in the long-term.

For the moment, companies are more interested in desalinating sea water for use as drinking water rather than using it as a fuel source. However, current desalination techniques use a huge amount of energy. Indeed , energy consumption can account for up to 70 per cent of the desalination costs. This is almost incredible: the global production of desalinated water uses approximately 75.2 terawatt-hours  (1012 watts) of electricity per year, which is enough to power about  7 million homes.

This is the reason why GE and Aramco Entrepreneurship have just launched an open global technology challenge aiming at finding solutions to improve the energy efficiency of seawater desalination. This $200,000 challenge will be awarded to four winners with a prize of $50,000 each, and the two companies may invest towards commercialization of the best ideas.

The Director of Aramco Entrepreneurship, Nabil Al-Khowaiter, explains that “finding a more efficient method of desalinating seawater will be a game-changer in our collective pursuit of a more sustainable energy future across the globe. Due to increased water scarcity, countries around the world are poised to rely more and more heavily on desalination as a means to provide fresh water. Aramco Entrepreneurship is partnering with GE not only to identify new solutions to lowering desalination costs, but also to invest in and attract new technologies and industries to Saudi Arabia.”

Beijing supplied by seawater in 2019 ?

Saudi Arabia is not the only country interested in desalinated sea water. Wang Xiaoshui, desalination department director at Beijing Enterprises Water Group announced that desalinated seawater will supply domestic tap water of a third of Beijing’s inhabitants from 2019.

In 2013, the Chinese company researched and developed its own reverse osmosis membrane technique. Beijing Enterprises Water Group had already started desalinating seawater in March 2012 and it transported 50,000 tonnes of freshwater from the coastal city of Caofeidian to Beijing and Tianjin. The group has a 1-million-ton desalination project under construction in Caofeidian, in the district of Tangshan in the Hebei Province.  Liu Fushun, Deputy General Manager, declared that this project is to be completed by 2019.

Ma Jun, director of the Institute of Public & Environmental Affairs in Beijing, explains that the Chinese capital has suffered from droughts since 1999. Desalination can help relieve the water, but he warns that this process can also cause pollution. “In the long term, the eventual solution is to save and recycle used water at the consumer end,” he said.

Sea water is already popular in the South Pacific where it is used for cooling buildings.

In French Polynesia, the InterContinental Hotel in Bora Bora is, since 2006, the first private building to be cooled entirely with Sea Water Air Conditioning (SWAC). This system uses deep cold seawater that replaces the energy-intensive central refrigeration systems which chilled water to provide air conditioning in buildings.

This system has now become very popular in Hawaii. Jan War, Operation Manager at the Natural Energy Laboratory of Hawaii Authority, declares that SWAC is “an underutilized technology. Because of the cost of fossil fuels, more and more people are realizing they have a resource underneath their feet.”

So, might sea water really be the energy of the future?

Alix is a writer, researcher, and correspondent on the Asia-Pacific region for Marine Renewable Energy LTD. She previously served as a maritime policy advisor to the New Zealand Consul General in New Caledonia and as the French Navy’s Deputy Bureau Chief for State Action at Sea, New Caledonia Maritime Zone