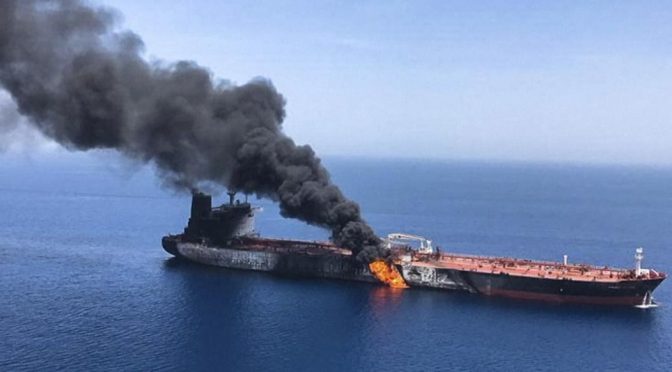 The recent attacks on merchant shipping in the Persian Gulf, Straits of Hormuz, and Gulf of Oman by forces of the Iranian Revolutionary Guard Corps has conjured up images from the Tanker War of the 1980s. The bombing of four ships at anchor off Fujairah, the mining of two tankers as they departed the area, and the recent seizure of a British tanker has raised the question of how to best protect commercial ships plying their trade. This is an age-old problem that has been with nations and navies since the days of oars and sail. Without a rehash of every concept used since the dawn of time, there are three major methods that come to mind that can be readily adopted.

Before delving into these concepts, it is best to look at the most recent history, and that is from the aforementioned Tanker Wars of the 1980s. Starting in 1981, Iraq and Iran were engaged in a border conflict that quickly spilled over into the Persian Gulf. Iraqi aircraft targeted Iranian tankers with air-launched sea skimming missiles to economically weaken their enemy. Since Iraq exported its oil via overland pipeline, Iran eventually countered by striking the allies of Iraq, particularly the tankers using ports in Saudi Arabia and Kuwait. By 1987, the level of combat had reached such a crescendo that the state of Kuwait sought outside assistance to guard their fleet. After making overtures to both the Soviet Union and the United States, it was the latter who agreed to commence convoy operations, but only if the ships were registered under the American flag. From that point on, the U.S. Navy orchestrated convoys into and out of the Persian Gulf but included only American vessels.

From the beginning, challenges emerged in the convoy system. The first outbound convoy from Kuwait encountered an Iranian-laid minefield. Bridgeton, one of the eleven reflagged tankers, struck a mine. Without any minesweeping equipment on board the escorts, and with fear what a mine could do to the warships, they fell in behind Bridgeton as she plowed her way through the Persian Gulf as the world’s largest ad-hoc minesweeper. Eventually, a system of escorts and mine clearance assets allowed the U.S. to safely move ships through the challenged waters. Fast forward thirty years, the question posed is how can the nations of the world, who depend on commerce from the Persian Gulf, secure the area from potential Iranian threats and attacks?

One of the overriding issues that must be addressed is the international nature of global shipping. According to the United Nation’s Review of Maritime Transport 2018, half of the world’s merchant fleet vessels are registered in the Marshall Islands, Liberia, Hong Kong, Singapore, and Malta. It is very unlikely that parent navies will be providing the necessary escorts for ships registered in these countries, except China covering those of Hong Kong. The use of open registries, or flags of convenience, developed after the Second World War and has proliferated. Even the captured Stena Impero, while flying the flag of the United Kingdom, does not employ any British nationals onboard. The initial question becomes is it the responsibility of the navies of the world, such as the United States, to assume the role of escort? The U.S. did not do so in the Tanker War until ships flying the American flag were attacked. If they do assume the mantle of protector, it does raise the question of what is the advantage of registering a ship under one’s own national flag?

Assuming the national command authority authorizes an escort of vessels in the area, the next question is method. There are many historical examples, from the Napoleonic Wars, the First World War, the Second World War, and the many scenarios conjured up from wargames against NATO and the Soviet Union in a possible third Battle of the Atlantic. These many iterations boil down to three basic types.

First, there is the Bodyguard method of escorting. Whenever the President of the United States, or some other high value individual travels in the public domain, we are used to seeing a phalanx of armed guards, with high-tech weapons, armored vehicles and escorts swarming around their primary target. They are using many techniques, but one of the most immediate is the use of fear. Any assault on the target will be met with overwhelming force and hence they utilize a deterrent strategy. However, even with such a heavily armed escort, this does not mean that an attack is impossible, as we know from history. A truly determined enemy will rarely be swayed from their intended goal, no matter the obstacle.

At first, this method seems to be the option with the best outcome as it provides the most protection and can quickly respond to any potential threat. However, the issue with the Secret Service option is the cost and logistics involved. It requires a tremendous amount of resources and planning to orchestrate any movement. Currently, ships freely move through the area as soon as they are loaded. A Secret Service style convoy operation will mean ships will have to be gathered, wait, and delay their intended offload – thereby disrupting the movement of their cargoes and impacting the economics of their trade. It will also require a large commitment by navies to provide the needed escorts for any such operation.

The second operational method is the Policing method. In any community, town, or city in the United States, the police forces are in their cruisers, on their bikes, or in the air, monitoring and patrolling. The intent of these patrols is to deter crime, but also observe areas and provide quick response should an incident occur. Advocates for this style contend that this forward presence of armed officers, with the ability to call upon reinforcements from other patrolling officers, can handle most situations. Should there be a larger incident, police departments can call upon Special Response Teams (SRTs) to handle any escalation.

With the number of ships transiting the Persian Gulf, a patrol operation in the vein of a police department appears to be a likely candidate for employment. Iranian use of light mobile forces and not employing their larger units – such as frigates, submarines, or aircraft – means that naval forces, such as destroyers, frigates, and corvettes could handle the patrolling of areas in question, with a larger presence in more contested waters. The SRT back-up would be from air assets based ashore or afloat.

The third concept is the Fire Suppression method. Unlike their police brethren, firefighters do not patrol the streets in their fire trucks looking for flames. Instead, they are in stations, strategically located to respond should a contingency emerge. If the situation is beyond the resources of any one station, mutual aid can be called for assistance while other assets are moved to cover the areas vacated by responding units. The biggest change in fire departments is the proliferation of fire prevention education and fire suppression equipment. Most homes and business have smoke detectors and portable extinguishers or sprinkler systems to extinguish any fire before it can envelop a structure.

This method of patrolling could be adopted for use in convoy operations. Like the police method, naval vessels would assume strategic stations to patrol the waters in question. Due to the large number of ships traversing the area, an operation command headquarters, similar to a 911 dispatch center, can receive information from ships sailing the area to discover any potential targets or threats. As ships sail through the most dangerous and contested waters, they can embark armed teams – such as Marines, Fleet Anti-Terrorism Security Teams (FAST), or Armed Guard detachments – to provide close in security until assistance can be provided from naval forces responding from their stations. A few armed personnel on Stena Impero may have prevented the fast-rope of Iranian forces onto the ship.

Variants of these three concepts have all been used in the Persian Gulf, Strait of Hormuz, and Gulf of Oman area. United States convoy operations late in the 1980s during the Tanker War, and referred to as Operation Ernest Will, were similar to the Secret Service style. During the First Persian Gulf War, coalition navies established a series of checkpoints for ships to check-in at and meet with patrolling warships. In Operation Iraqi Freedom, the 92nd Infantry Brigade of the Puerto Rico National Guard, was activated and broken up into 13-person teams to embark on American merchant ships transporting materiel to the Middle East.

These recent operations, along with the three methods discussed, are the most likely options available to handle an escort mission in the Middle East. The factors that will determine the course of operation will be the level and frequency of attacks initiated by the Iranians, the amount of resources allocated by the nations undertaking the escort mission, and the willingness of commercial companies to participate in any of these methods. What may eventually develop is the use of all these methods at some point in the future or a hybrid approach to perform this important undertaking.

Salvatore R. Mercogliano is an Associate Professor of History at Campbell University in Buies Creek, North Carolina and teaches courses in World Maritime History and Maritime Security. He is also an adjunct professor with the U.S. Merchant Marine Academy and offers a graduate level course in Maritime Industry Policy. A former merchant mariner, he sailed and worked ashore for the U.S. Navy’s Military Sealift Command. His book, Fourth Arm of Defense: Sealift and Maritime Logistics in the Vietnam War, is available through the Naval History and Heritage Command. His essay, “Suppose They Gave a War and the Merchant Marine Did Not Come?” won 2nd Prize in the Professional Historian category of the 2019 Chief of Naval Operations Naval History Essay Contest.  Another of his essays “To Be A Modern Maritime Power,” was published in the August 2019 issue of U.S. Naval Institute Proceedings.

Featured Image:  An image provided by an Iranian news agency showing an oil tanker burning in the Gulf of Oman on Thursday. (Iranian Students’ News Agency, via Reuters)