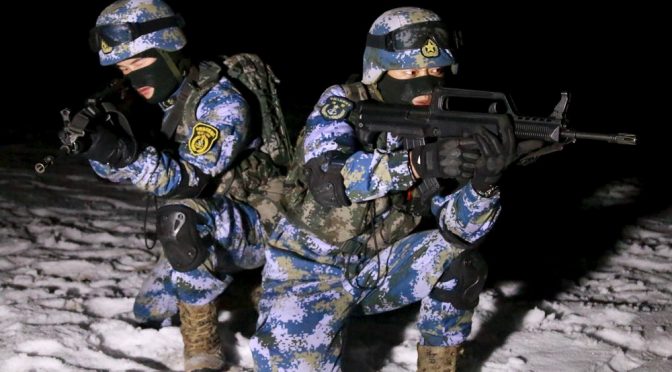 This article originally featured on the Jamestown Foundation’s Chief Brief. Read it in its original form here. Read Part One here.

Editor’s Note: This is the second part of a two-part article discussing organizational reforms and evolving missions for the PLA Navy (PLAN) Marine Corps. The first part, in our previous issue, focused on the growing order of battle for the PLAN Marines. This second part focuses on the creation of a service branch headquarters for the PLAN Marines, and their expanding training for expeditionary warfare and other missions. Taken as a whole, this two-part article provides significant new information and analysis to update the December 3, 2010 China Brief article titled “China’s Marines: Less is More.”

Along with increasing the number of PLA Marine Corps (Zhongguo Renmin Jiefangjun Haijun Luzhan Dui, 中国人民解放军海军陆战队) combat units, a corps-level Marine Corps Headquarters also has been formed. Its first commander is Major General Kong Jun—who shared responsibility with Political Commissar Yuan Huazhi, until Yuan was reassigned in early 2019 (Pengpai News, May 27 2017; Pengpai News, January 15). Kong spent most of his career in the Army, rising through the ranks as an armor officer and commander in the former 12th Group Army. After being assigned to the Marines, he led the Marine formation that took part in the July 2017 parade at Zhurihe Training Base in Inner Mongolia. Yuan spent most of his career as a naval political officer with service in the South Sea Fleet—where the two existing Marine brigades have been located—but was transferred to the Air Force. His successor has not yet been identified. The two leaders are assisted by deputies and a staff; among the headquarters staff, Senior Colonel Chen Weidong, former commander of the 1st Marine Brigade since at least 2010, is now a deputy chief of staff (PLA Daily, July 29 2018). Due to his long experience in the Marines, he is likely to move up the ladder as leadership positions become available.

The location of the new Marine Corps Headquarters appears to be near Chaozhou, Guangdong, just north of Shantou and slightly to the east of Jieyang, where a new Marine brigade is stationed (Xiangqiao Regional Government, July 26 2018). By locating its headquarters outside of Beijing, the Marine Corps organization parallels the PLA Air Force Airborne Corps—which maintains its headquarters in Xiaogan, (Hubei Province), and which also commands subordinate brigades dispersed in multiple regions. By locating its headquarters a great distance from many of its subordinate units, this structure implies that the Marine Corps is not intended to deploy and fight as an organic whole, as may be the case for Army group armies. Instead, like the Airborne, Marine brigades likely are conceived and designed to be employed independently, but supported by other elements of its parent service. As such, Marine brigades do not appear to be directly subordinate to the Theater Command Navies in whose regions they are located; rather, they fall under the direct command of Marine Corps Headquarters (MCHQ).

A major responsibility of the MCHQ will be to manage the distribution of the increasing number of missions Marine units are now required to support. These real-world tasks include: providing forces to the Gulf of Aden escort mission, which rotates among the three fleets roughly every four months; deploying personnel to the Djibouti Support Base, which opened in August 2017; and manning garrisons and newly constructed facilities in the Paracel and Spratly Islands in the South China Sea. The Headquarters will also manage training for the brigades, determining which units travel to what training areas and participate in which military competitions and exercises, both within and outside of China. It also will coordinate with the fleets to ensure that Marine units are available for service and joint exercises. Undoubtedly it will also inspect training and other brigade activities, such as political indoctrination, logistics, and maintenance.

For most of the past two to three decades, Marine brigades conducted the majority of their training in the South China Sea and near their bases on the Leizhou Peninsula. Most training was conducted independently, supported by Navy assets, and focused on island and reef operations. Only on a few occasions—such as the Peace Mission 2005 exercise with Russia on the Shandong peninsula—did Marine units engage in joint training outside of southern China. After Peace Mission 2005, Marine units began to exercise more often with foreign militaries, both in China and overseas. These opportunities increased as Navy task forces assigned to the Gulf of Aden escort mission traveled to and from their patrol duties, stopping along the way for port visits or bilateral exercises. Marine units have also hosted a variety of foreign visitors to their garrisons and opened a few of their exercises to outside observers.

Those training patterns changed in 2014 when the Marine Corps conducted its first winter training at the Zhurihe Training Base in Inner Mongolia. This was followed by trips to the Taonan Training Base in Jilin in 2015 and Korla, Xinjiang in 2016, which also included elements from the Navy SOF Regiment (PLA Daily, January 31 2015). In addition to the cold weather, units had to contend with desert, forest, and plateau terrain, very different from the sub-tropical climate and terrain in southern China. In a second out-of-area exercise in 2015, jungle training was conducted in Yunnan in August 2015 (PLA Daily, August 25 2015). In early 2018, Marine units, apparently including newly formed units, returned to Yunnan and also exercised simultaneously in Shandong (PLA Daily, March 16 2018). In July 2018, the PLA hosted the “Seaborne Assault” competition for Marine units as part of the International Military Games 2018 in Shishi, Quanzhou city (near Jinjiang and at one of the new Marine brigade’s garrisons) (PLA Daily, July 23 2018). These changes in Marine training indicate the determination of the PLA leadership for the Marine Corps to be ready to perform expeditionary missions in any terrain and climate.

The 2018 Department of Defense (DOD) report to Congress states that “large-scale amphibious invasion is one of the most complicated and difficult military operations.” As such, amphibious operations require specialized equipment (both for landing and for naval/air support forces), extensive training, and intricate planning and timing in execution. Accordingly, considering the previously existing Marine and Army amphibious units and new Marine units under development, DOD concludes:

The PLA is capable of accomplishing various amphibious operations short of a full-scale invasion of Taiwan. With few overt military preparations beyond routine training, China could launch an invasion of small Taiwan-held islands in the South China Sea such as Pratas or Itu Aba. A PLA invasion of a medium-sized, better-defended island such as Matsu or Jinmen is within China’s capabilities.2

Campaigns against small or medium islands in China’s near seas likely would involve hundreds to the low thousands of troops delivered over the beach by a portion of the PLA Navy’s roughly 50 medium landing ships (LSM) and tank landing ships (LST) and scores of additional smaller landing craft, supported by ship-based helicopters and land-based aircraft. These assets are dispersed among all three fleets, but could be concentrated for an amphibious campaign. The Navy’s relatively new Type 071 Landing Platform Dock (LPD) large amphibious ships also could provide support to assaults on small or medium islands. Numerous civilian roll-on/roll-off ships and other transport ships may not be necessary for such limited operations, but would likely be employed in larger campaigns after a port is secured.

For missions beyond China’s three seas, the Navy’s fleet of six Type 071 LPDs, the first of which entered service in 2007, is the PLAN’s primary means of moving Marine units over long distances. These ships each can carry approximately a battalion of infantry, about 20 to 30 vehicles, and two to four helicopters for extended periods of time. Additional Type 071s are expected to enter service; and several new, larger amphibious ships, generally called the Type 075 amphibious assault ship (LHA), likely will also enter the force in coming years (Office of Naval Intelligence, 2018; National Interest, March 31 2017). Depending on the availability of ships, multiple battalions, amounting to a brigade or more, could be at sea for several weeks or months. In addition to combat, anti-terrorist, or deterrence missions, these forces could be used for disaster relief or emergency evacuation operations. But assembling a multi-ship, multiple battalion task force, with some degree of sea-based air support, is probably is at least a decade away as sealift is added and the PLA Marine Corps expands its resources and capabilities.

The expansion of Marine Corps is a major component of the goal to develop the PLA into a “world-class military” by the middle of the century (2049). When fully manned, equipped, and trained, the Marine Corps will provide Chinese leaders with options previously unavailable. As in Djibouti, PLA Marines will continue to be seen in places they’ve never been seen before. And, as they sing in their 2018 recruiting and propaganda videos, “We are different!” (PLA Daily, March 11 2018; PLA Daily, December 21 2018).