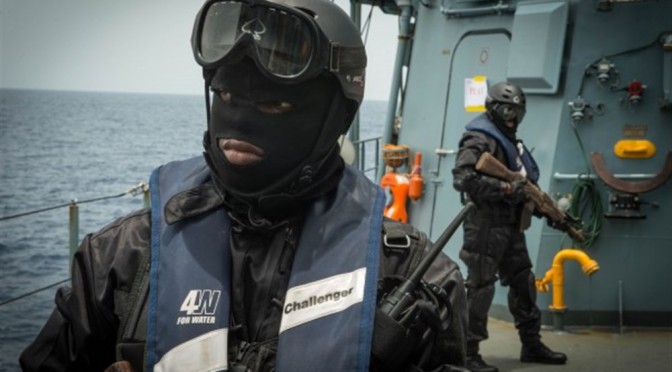 We interview CAPT Rinko, USN, and CDR Sune, Cameroon, about Obangame Express, the 23 Nation Gulf of Guinea Maritime Security exercise. We discuss the scope and purpose of the exercise, the challenges of building cross-organizational/ cultural/ national inter-operability, and lessons learned. For context on the ongoing expansion and conduct of Obangame Express,  CIMSEC Africa expert, Dirk Steffen assessed this exercise last year.

The International Crisis Group (ICG) recently released a report* on maritime security challenges in the Gulf of Guinea.  As usual from ICG, the analysis is excellent and informative, with reasonable policy recommendations to address the problems associated with increasing security challenges afloat (piracy, oil theft, smuggling, illegal fishing) in the region.  Unfortunately, there is little chance that the proposed courses of action will be pursued or efforts by regional states or organizations will be up to addressing these challenges.

What ICG calls “piracy” (beyond the traditional legal scope)  is increasing…42 attacks, 168 hostages kidnapped, and 4 deaths between January and September of 2012.  What had been primarily a problem in Nigeria’s Niger Delta has expanded, with attacks or raids in neighboring Benin, Togo, Ghana, the Ivory Coast, Cameroon, and Equatorial Guinea since 2009.  In an accompanying Op-ed at Foreign Policy, ICG’s Thierry Vircoulon argues that maritime security in West Africa is important, both to the states in the region that want to benefit by tapping into their national resources, and the rest of the world that increasingly depends on oil from the region (40% of Europe’s oil is imported from the Gulf of Guinea, and 29% of the U.S.’s).

The ICG’s first recommendation is to improve the economy in the coastal regions of the Gulf, thereby diminishing the need for locals to pursue illicit activities afloat as a livelihood. Unfortunately, precedents for Nigerian economic policies in the Niger Delta do not make it seem likely that countries in the region will begin to “boost job creation along the coast, in particular by protecting artisanal fishing, stimulating the local fish-processing industry, providing professional training for vulnerable sectors of the population” any time soon.

The second set of recommendations entail improved maritime security forces for the region.  Once again, this is a laudable goal, but it’s unclear who would pay for expanded and better-trained navies and coast guards for at least half-a-dozen African states.  Even factoring in potential aid from the U.S., Europe, or China it’s not clear how a “donated” navy would be able to be enough of an effective deterrent against local pirates and criminals.

The third set of recommendations revolve around establishing bilateral and regional frameworks for combined afloat operations.  Whether in the context of ECCAS (Economic Community of Central African States) and ECOWAS (Economic Community of West African States), combined patrols between states such as Nigeria and neighbors such as Benin and Cameroon, or improved intelligence sharing relationships, these types of operations would be essential to stopping the current insecurity.

There are numerous challenges to implementing this sort of regional cooperation. however.  First, “maritime cooperation is still in its infancy and is hampered by political tensions and distrust of neighbouring states toward Nigeria.”  Nigeria and Benin have begun to cooperate and conduct combined patrols, with Operation Prosperity starting in 2011.  However, Benin has virtually no Navy, Coast Guard, or maritime security force.  According to Janes, Benin’s Navy consists of three patrol craft, but one vessel dates from the late 1980s and isn’t believed to be operational, and the current status of the other two donated by China in 2000 is unclear.  Thus Nigeria bears the brunt of responsibility for patrolling Benin’s waters, which is good in the sense that they now have the authority to pursue criminals operating there, but bad in the sense that they have in the past shown limited ability to control illicit actors in their own waters, let alone next door.

The shortcomings of these proposed solutions point to one of the biggest problems with addressing maritime security challenges in West Africa as “piracy,” in that much of this criminal activity isn’t piracy at all.  Much occurs within the various states’ territorial waters, while under the traditional definition per international law, piracy occurs in international waters.  In these instances, the problem is one of criminals based in one state traveling to the territorial waters of a neighboring country to commit crimes afloat.  The difficulty isn’t that these acts occur on the high seas where no one has jurisdiction, but rather, because they happen in someone else’s jurisdiction.  A partnership where Nigerian criminals on the water can be pursued by effective maritime security forces across borders is essential, but seems unlikely unless an international sense of urgency increases.

Lieutenant Commander Mark Munson is a Naval Intelligence officer currently serving on the OPNAV staff.  He has previously served at Naval Special Warfare Group FOUR, the Office of Naval Intelligence, and onboard USS Essex (LHD 2).  The views expressed are solely those of the author and do not reflect the official viewpoints or policies of the Department of Defense or the US Government.

*Although this link is a summary, the actual full report is in French, the promised English version has yet to be published

* UPDATE: ICG has posted the English translation of the full report.