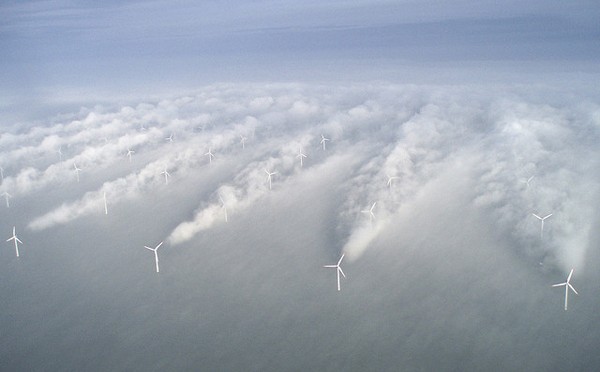 Rather than destroying the eye of the storm, which, according to the US National Oceanic and Atmospheric Administration (NOAA), is suggested every hurricane season, a new (crazy?) study from a Stanford University professor notes an additional advantage of building offshore wind farms. Besides creating clean energy, offshore wind farms could dissipate hurricanes!

At a time of the year when Pacific countries and islands are struck by this destructive phenomenon, this study comes as good news!

It almost sounds too good to be true. But scientists from Stanford University, Cornell University and the University of California-Davis, are categorical: “You can dissipate hurricanes so much that you can reduce wind speeds, peak wind speeds by more than half, and the storm surge by almost 80 percent in the case of New Orleans and hurricane Katrina,” says Mark Jacobson, professor of civil and environmental engineering at Stanford University.  The authors even declared that 78,000 turbines 90 meters high placed off the coast of New Orleans could have reduced Hurricane Katrina’s wind speeds by as much as 158 km per hour by the time they reached land. And they go on: 100,000 turbines located between New York and Washington, D.C., could have weakened the winds of hurricane Sandy by up to 140km/h and reduced storm surge by 34 per cent. It is not without mentioning the financial benefits of producing huge amounts of clean energy.

When winds blow in the turbine blades, some of their kinetic energy is converted into electric energy. In theory, the winds converted could no longer be used within the hurricane, which would therefore slow it down.

Jacobson explains: “We found that when wind turbines are present, they slow down the outer rotation winds of a hurricane. This feeds back to decrease wave height, which reduces movement of air toward the center of the hurricane, increasing the central pressure, which in turn slows the winds of the entire hurricane and dissipates it faster.”

Another consequence of hurricanes are storm surges. This is when a hurricane causes waters along the coast to rise above the normal tide, resulting in wide-ranging flood. However, the study also affirms that wind farms could reduce storm surge by up to 79 per cent, due to lower wind speeds.

However, installing 78,000 offshore wind turbines would have a cost of hundreds of billions of dollars. But Jacobson is optimistic: “You get all that money back by electricity sales over 25-30 years, and you reduce storm surge and wind speed associated with a hurricane.” Still, is it realistic to think that this can be done?

Could this be true?

Professor Cristina Archer of the University of Delaware, who is a co-author of the study, is sure that wind farms are a new solution against the disasters that the U.S are often facing. She suggests locating wind farms in offshore areas where they could use the wind for electricity, offsetting fossil fuel use and its resulting emissions and pollution. “If you can be smart about it, then you can have still very, very high benefits and locally. So, for example, for [Hurricane] Katrina, we placed the turbines just up wind of New Orleans,” she said. “And, so we protected New Orleans by taking action in New Orleans. So [we showed that] local actions had actual local benefits.”

A climate scientist at Massachusetts Institute of Technology, Kerry Emanuel, is also optimistic “It’s a fairly straightforward calculation,” he says.”It’s not at all implausible.”

And they are not the only ones: Mark D. Powell, a hurricane researcher at the American National Oceanic and Atmospheric Administration is excited about the conclusions of Jacobson’s study. He declared that the agency would fly its data-gathering planes (with the pretty name of “Hurricane Hunter“) which are piloted into storms every season for meteorological research, into areas where Jacobson proposed to install turbines. Powell believes that by gathering hurricane wind data from those areas, scientists could be able to forecast how the hurricanes would impact turbine blades.

However, NOAA is not planning to investigate any technique to reduce hurricanes for the moment. Powell explains that the organization is currently rather focusing on improving hurricane forecasts.

Dr. Ioannis Georgiou, director of the Pontchartrain at the Institute for Environmental Sciences from the University of New Orleans, with a background in storm surge and hydrodynamic modeling, also examined the study but he is not convinced.

“I’m not questioning the reduction in winds.” However, the scientist argues that more research are needed on certain aspects of the study, in order for before an investment to be made into offshore wind farms aiming at reducing hurricanes.

For example, he explains that the shoreline of Louisiana is far more complex than the research model shows. He also asserts that the research doesn’t entirely take into account the numerous ways storms could reach the coasts.

Professor Georgiou also affirms that storm surge is not directly related to wind speed. Therefore, reducing wind speed is not the solution to avoid storm surges.

An expert in northern hurricanes at Queens College in New York, Nicholas Coch, is sceptical. He said: “That wind farm couldn’t possibly drain that much energy out of the wind”. However, he is not surprised by the idea, which is not new, he says.  Indeed, many years ago, one man “wanted to build windmills along the Florida coast to blow hurricanes back to Africa,” Coch recalls.

Offshore wind farms are not welcome in the United States of America!

There is a good reason why scientists are looking for new ideas to fight against hurricanes: from levees to storm barriers, seawalls and dunes: nothing has worked yet!

And Jacobson’s proposal might be difficult to apply in America. Indeed, there has been political and social resistance in the United States to installing even a few hundred offshore wind turbines. Undeniably, public acceptance is an important hurdle to U.S offshore wind power has to deal with. For example, the Cape Wind project of 130 turbines for a potential output of 468 megawattshad been delayed by many lawsuits, saying that the deal would drive up electricity costs.

However, this project could be running by 2016 and be the first offshore wind farm. It would be placed off the shores of Cape Cod and it would be run by Cape Wind.

So, is it the time for Americans to turn to offshore wind energy? We would then see if Jacobson was right!