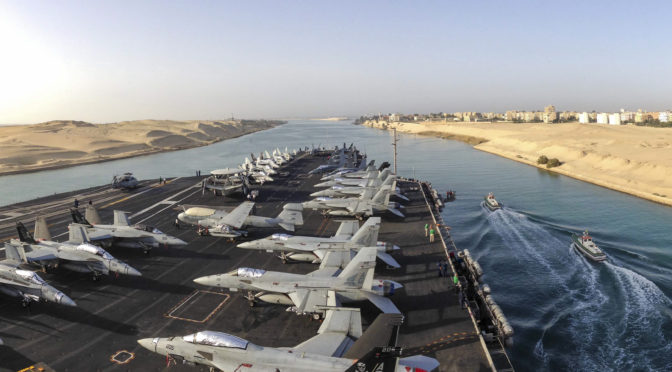 During these past two weeks, CIMSEC featured a wide array of publications on strategic maritime chokepoints and littorals, submitted in response to our call for articles issued in partnership with the Brute Krulak Center for Innovation and Creativity of U.S. Marine Corps University. This turned out to be one of the most packed CIMSEC topic weeks in recent memory, and one of the most insightful.

Maritime chokepoints and littorals remain strategic areas of interest in global strategy and potential warfighting campaigns. CIMSEC contributors pointed to a number of themes that can shape strategic calculations with respect to these critical geographic features.

Chokepoints and littorals magnify the influence of nearby states, who often by other measurements of national power are seen as lesser nations relative to major states. Yet in times of conflict or crisis, it is major states who could very well come to depend on these littoral nations for critical support and access, nations whose political sensitivities can powerfully constrain diplomatic and warfighting options for great powers. Even non-state actors, such as insurgents or pirates, can force multinational responses and contingency planning through small-scale actions in a chokepoint of global import.

Another major theme authors touched upon was the role of strategic chokepoints and littorals in emerging American warfighting concepts, particularly those of the U.S. Marine Corps that encompass archipelagic defense. As the Marine Corps transforms into a stand-in force that can hold the line against a great power while enabling follow-on access from friendly forces, it will have to master schemes of fire and maneuver across the vast array of chokepoints and littorals within Western Pacific island chains. Some authors envisioned the Marines as an anti-shipping force, with a few touching on the vital role mine warfare in particular can play in contesting chokepoints and manipulating an adversary’s avenues of access, while also bemoaning U.S. naval forces’ longstanding lack of interest in offensive mining. As U.S. forces develop new warfighting concepts for the Pacific, it is clear that open-ocean combat and fighting for chokepoints and littorals are two sides of the same coin. As 21st century great power competition begins to take shape, one can look to the world’s coastlines to find its major contours.

Authors also challenged traditional ideas of chokepoints being fixed geographic areas, whose influence is as supposedly permanent as their location. And yet the world is witnessing major changes that are redefining the chokepoint and its value. The Arctic is melting away, revealing a complex mosaic of chokepoints and littorals that will lend themselves toward new lines of communication for global commerce, as well as new zones of competition. Chokepoints may also emerge not as geographic features, but as more abstract zones that develop within the seams of operational concepts, intelligence collection abilities, diplomatic clout, and even in in the information environment. Their constraining effect remains the same, but the ability to adjust to their influence becomes much more complex than simply being in the right place at the right time.

Strategic chokepoints and littorals will continue to have major influence on world events, both in peace and in conflict. Today as thousands of ships sail through these narrow channels and naval forces traverse nearby waters, the access these zones create may have become an assumed feature of global activity. But should that access come under threat or become outright contested, the vital importance these areas will hold will become all too apparent, and in the form of consequences that could ripple across the globe.

“Let Me Get this Strait: The Turkish Straits Question Revisited” by Paul Pryce

The cornerstone of this power projection complex in the western Pacific is forward deployed military forces, which are in turn enabled by the availability of proximate and friendly basing in theater. However, the ability of the United States to sustainably conduct expeditionary operations in the strategic chokepoints and littorals of Asia could crumble in the absence of the allied access it has come to rely on.

“Mine the Littorals and Chokepoints: Mine Warfare in Support of Sea Control” by Major Brian Kerg, USMC

While DMO and EABO provide the essential building blocks of sea control and denial, their deterrent power can be exponentially increased through the integration of mine warfare. Whether deployed between EABs by ExMIW companies, activated from UFPs and maneuvered into place as the situation dictates, or fired into shallow waters with the modified Quickstrike-ER and moved as required by C2 systems, MIW is the most promising yet underdeveloped capability for today’s maritime strategists.

“There are no Strategic Chokepoints” by Captain Jamie McGrath, USN (ret.)

Military strategists often speak as Fisher did of strategic chokepoints, believing them to have significant geopolitical value and act as epicenters for maritime strategy, where the control of which is considered vital for success in maritime conflict. But are these chokepoints truly strategic? Does the success of a nation’s maritime strategy actually hinge on the control or loss of control of these narrow seas?

“An Emerging Strategic Geometry – Thawing Chokepoints and Littorals in the Arctic” by Robert C. Rasmussen

The ongoing transformation of the Arctic from an inaccessible frozen wasteland to an accessible and untapped reserve creates not only a new contested space, but will create new strategic chokepoints and littoral operating environments. The United States, in concert with its allies, will need to invest in the ability to access and secure this environment in order to maintain sovereignty and security in this new world.

The INDOPACOM AOR continues to be a primary focus of U.S. naval forces, and the area is of central importance to China. This map describes the strategic importance of Southeast Asian littoral geography to China’s interests. By studying the map the user sees correlations between China’s diplomatic and economic investments and chokepoint geography.

“Chiseled in Space: Temporary, Non-Geographic Chokepoints in the Battle of the Atlantic” by Heather Venable

Much can be gained, then, by conceptualizing chokepoints more broadly as areas of temporary advantage that may be created or destroyed through the application of either new capabilities or existing ones in ingenuous ways to create an outsized advantage. In the case of the Battle of the Atlantic, these types of chokepoints resulted in the greatest strategic effect.

The chokepoints and littorals surrounding Indonesian and Philippine waters would make for excellent forward positioning for a Marine Corps stand-in force. It would provide a critical bulwark for U.S. force posture in the Pacific by facilitating access for follow-on forces from allied Australia, and access into the South China and Philippine Seas.

Major General Pat Donahoe, Deputy Commander for Operations, U.S. 8th Army, and Prof. Don Chisholm of the U.S. Naval War College join us to discuss why the 8th Army is known as “the Amphibious 8th,” the campaign through the southern Philippines in World War II, Admiral Daniel Barbey, and the different amphibious cultures that emerged during the war.

The drone circling overhead continued to pace them, repeating its message, its demands growing increasingly terse and harsh. The ship’s master counted no less than three times his vessel was threatened with lethal force with never a blip on the radar to indicate a closing vessel or aircraft. Open seas, open skies, and toothless demands. Twenty-five minutes after the initial challenge, two long-range anti-ship missiles, their telemetry continually updated by the overhead drone, slammed into the Píng Jìng De Hǎi Yáng.

Strategic chokepoints and littorals are the arena of current and future power struggles. Great power competition is layered within these maritime and littoral domains. To a lesser extent, but still consequential, are the potential actions of regional and non-state actors capable of causing disruption along maritime chokepoints and littoral zones. The United States will be required to address multi-layered challenges to its maritime dominance in these areas while also fulfilling the role of humanitarian and the facilitator of free and open commerce.

“Guarding the Gates: Is International Naval Control of the Bab Al Mandeb Feasible?” by Elizabeth White

“Developing Security in a White Water World: Preparing for the Arctic” by Ian Birdwell

The Arctic is changing physically and the security dimensions of the region are changing along with it. The region will not be ice-free overnight, and the United States is not without partners in addressing those changing strategic considerations. It behooves the United States to not pursue a hardline balancing arrangement against Russian militarization and instead pursue what it has been doing for some time, preparing for the potential of Arctic operations across all service branches.

“Does Tomorrow Ever Truly Die?” by Capt. John Holmes, USMC

My cinematic reveries were interrupted when it became apparent that 1997’s Tomorrow Never Dies, starring Pierce Brosnan as the titular hero, was a lot closer to our current reality than I had ever expected. Themes of great power competition, technological proliferation, state and non-state conflict, media manipulation, and conflict in the strategic waterways and littorals, which may have seemed somewhat out of place in 1997, feel all too prescient in 2020.