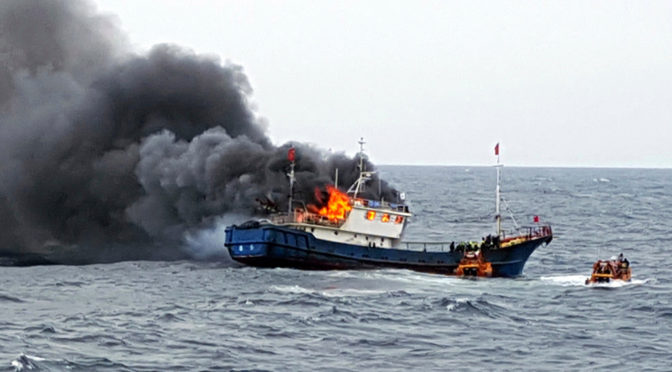 International maritime security needs a dramatic shift in thinking and commitment to the greatest transnational threat of the twenty-first century. It is not drug trafficking which, while impactful in criminal behavior and the unfortunate consequences to consumers and their families, is not an existential threat. Nor is terrorism, specifically maritime terrorism, the primary concern. While maritime terrorism has occurred, it has been rare; and while it must be addressed and perpetrators brought to justice, the frequency of incidents (USS Cole, MV Limburg, Mumbai, and so on) have been comparatively few and far between.

Instead, the international community needs to turn to mid-twentieth century psychologist Abraham Maslow whose hierarchy of needs suggest that security and safety are important but are secondary to physiological needs for any person: rest, warmth, water, food.

Food is central to warfighting and to national stability. Whether it was Napoleon or Frederick the Great who said that an army marches on its stomach, the concern over the availability of food is apparent in medieval sieges or Julius Caesar’s near obsession about the availability of corn for his legions or denying it to his enemies as he discusses in his work, The Gallic Wars. The same is true for access to grain in the Sicilian Expedition, the Roman Empire’s ties to Egypt, or in some of the decision-making in major campaigns.

In terms of maritime security, maritime life provides the most fundamental need for protein. Contrary to the popular adage used in another context, there aren’t always other fish in the sea. Fish consumption continues to increase with population, but the population of fish doesn’t necessarily increase with human demand. It is difficult to find a report on fishing that doesn’t paint a bleak picture of overfishing in most waters. Marine protein for people and as fishmeal for cattle is growing unabated. Some dire reports suggest that by mid-century commercial fishing will be unviable due to fish depletion. Fish as a resource will be fought over just as spice and oil have been the cause of conflicts, but it could be far worse considering that spice was a nicety and not a necessity in the hierarchy of needs. And while all nations are dependent on oil economically, its unavailability would not be as immediately life-threatening as would the disappearance of fundamental marine protein. In fact, some countries have already begun firing on fishing vessels intruding on local waters. This is the canary in the coal mine for maritime security.

At nearly every maritime forum, audiences are reminded of the 90/80/70 percentages: the proportions of shipping by water, human population that lives near the water, and surface of the Earth that is covered by water. In this case, we need to consider a new set of numbers that affects maritime security, 50/40/30/20, including:

Part of the problem is that 20 percent, otherwise known as Illegal, Unreported, and Unregulated (IUU) fishing. One needs only read the work being done at the Pew Charitable Trusts or the superlative journalism by reporter Ian Urbina that cast a light on illegal fishing and its relationship to other security issues. 20 to 30 percent of fish sold in the United States, for example, was caught illegally. It can be higher elsewhere.

The U.S. Navy is not in the business of dealing with illegal fishing, as one senior Navy advocate once told this author. “That is not our job. It is not our mission. We have China to deal with.” China is at the heart of the problem given how its fishing fleets have moved well beyond the South China Sea to nearly all parts of the globe in recent decades. The issue is recognized by the current U.S. administration: “The PRC ranks first in the world for illegal, unreported, and unregulated fishing in coastal nations’ waters around the world, threatening local economies and harming the marine environment. Chinese leaders’ unwillingness to rein in these globally harmful practices does not match their rhetorical promises of environmental stewardship.” In Congress, the Maritime SAFE Act to address the threat of IUU fishing to national security was incorporated in the National Defense Authorization Act of 2020. Just a few elements of this legislation direct the inclusion of counter-IUU fishing as part of the mission of the Combined Maritime Forces, including counter-IUU fishing exercises in the annual at-sea exercises conducted by the Department of Defense, in coordination with the United States Coast Guard, and creating partnerships similar to the Oceania Maritime Security Initiative and the Africa Maritime Law Enforcement Partnership in other priority regions. It also encourages shiprider agreements.

The Navy would understandably resist this added mission for a variety of reasons. Organizationally, it changes very slowly, and is fundamentally opposed to shifting some construction resources from capital ships to smaller vessels that would be more appropriately suited for maritime security missions such as IUUF partnerships. Influential defense contractors are also predisposed to larger ship programs given the financial considerations. In addition, some of the most threatened areas, such as off the coast of West Africa, are not where the Navy can invest many assets given other threats and missions in the Western Pacific and the Middle East. While the Coast Guard is the authoritative choice on countering IUU fishing, it needs more resources, particularly given the cost of even just prosecuting captured vessels.

However, the Navy is deeply involved in great power competition, and IUU fishing is now part of that dynamic. Diminishing marine protein has the potential to destabilize China, given its insatiable appetite to feed its enormous population, and that increases the risk it poses to other nations as it tries to satisfy its essential needs at others’ expense. China will increasingly pressure states for access to their waters or outright impose itself as it has already done before. In the near term, IUU fishing denies local populations resources and economic benefits from marine protein. Today, Chinese fishing vessels are plying global waters for their own interests, but tomorrow, their white hulls will follow to protect these interests. And then, given the quickly growing size of the Chinese Navy, gray hulls will eventually ensure that fishing fleets go virtually unimpeded by any nation.

To counter this, the Department of Defense should establish a new Joint Interagency Task Force for IUU fishing (JIATF-IUUF) that has initial responsibilities off Africa. Such a JIATF, ideally led by U.S. Coast Guard officers, must work closely not only with partnered nations but with nongovernment organizations which have been at the forefront of the IUU fishing challenge. Organizations such as Global Fishing Watch, C4ADS, and others ought to be consulted, as should the Sea Shepherd Conservation Society, which has shifted its focus from challenging Japanese whalers in the Southern Ocean to successful public-private partnerships, especially in Africa. Sea Shepherd provides platforms and crews while the partnered host nations embark law enforcement detachments. This has resulted in the capture or seizure of more than 50 illegal fishing trawlers in recent years. Sea Shepherd, an organization with more than a dozen ships globally, is able to operate for about $10 million annually (due in part to most of the crew being unpaid volunteers). Whether the U.S. Government is willing to admit it or not, Sea Shepherd is providing capacity building and maritime partnerships that have been successful. In some cases, it has used former Coast Guard cutters. But the fact they are able to have such an impact at low cost ought to be looked at as a possible model for future U.S. partnerships.

Commander Claude Berube, USNR, PhD teaches at the U.S. Naval Academy. The views expressed are his and not necessarily those of the Academy or the Navy.