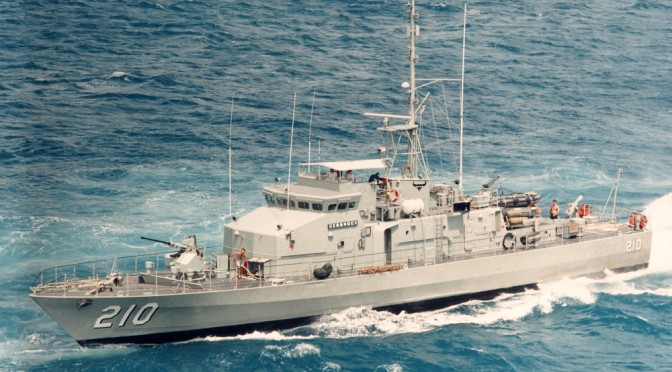 Rear Admiral (ret) James Vincent Purcell Goldrick AO, CSC, RANR, served three times as a the Commanding Officer of a ship at sea. He is a fellow at the Seapower Centre and a Naval Historian.
(editor’s note) He is also served with the Patrol Boat navy, which means he is one of the best.

The recent discussion about the different approaches to surface warfare officer training in the British and American navies has been of great interest to me, if only because the Royal Australian Navy, my own service, has largely combined British training methods and career paths with the use of American designed ships and equipment.

I have had first-hand experience with both British and American methods, as well as the Australian approach, having served at sea on two exchange postings with the Royal Navy, been both XO and CO of RAN ships, small and big (by Australian standards) and sea ridden USN units, including in command time in tactical control of MIO operations in the northern Arabian Gulf. If I could sum up my view with a one liner it is that the British system is better for individual ships, the American for a navy as a whole.

Here I need to make an important distinction – the USN’s operational requirements are not those of the British, still less are they the same as those of Canada or Australia, so its personnel solutions should not necessarily be identical. Another, associated aspect of the comparison is that the USN system works better in major units because these can have enough experts onboard – with their associated rank and seniority – to provide the necessary leadership to all the specialisations involved. This is very difficult to achieve in smaller ships. Actually, it’s practically impossible.

The unit of power in the surface forces of the smaller navies, particularly in recent years, has been the frigate or destroyer. Within the USN, although times are changing – as recent deployment patterns not only in the Caribbean but even the South China Sea suggest – it has remained that of the carrier battle or expeditionary strike group. This requires a very different approach. A USN destroyer or frigate has been judged largely by how it fits into the whole, while a Canadian or Australian and even a British ship has in the past to manage both task group operations and independent activity to a much greater degree. In other words, the smaller navies have had to wring much more out of their limited capabilities and doing so successfully requires a higher level of expertise at more junior ranks than has generally been the case for the USN.

The reality is that deep expertise is found in the O5s and O6s of the American Navy that the other naval services can only envy. But, contrary to some of the declarations in earlier contributions to this discussion, I’d take a British or Australian O3 or O4 in their specialisation over the average (but not the best) USN surface warfare officer with the equivalent qualified sea service any day. This may seem a hard judgement, but it is not one based on intellect, morals or individual quality, it is simply a matter of experience – a USN officer has to cover so many more bases that there is an inevitable element – somewhere in it all – of ‘once over lightly’. My belief is that the USN maintains the standards it does by sheer hard work and a great deal of sea time.

But there is more to it than that. It seems to me that the argument has been confused by the inclusion of platform and propulsion engineering into the wider question of the requirement of warfare officers for technological understanding and technical mastery in addition to what could be described as operator skills. Because of the ‘once over lightly’ problem, my judgement is that, in general terms, propulsion engineers provide a more effective service and ship commanders are more expert in their essential skills if there is no attempt for platform engineers to proceed down the path of combatant command. I believe very firmly, in so far as frigates and destroyers which may have to operate as autonomous units are concerned, that it is practically impossible to accumulate the expertise necessary to cover all the bases associated if the officer complement are to have an ‘unrestricted line’ background. All that time in the machinery spaces has to come at the expense of the combat system and tactical knowledge as well as the associated ship driving skills which are vital to the effective direction of a warship’s operations. One sees certain resonances of this argument in the American submarine community and it is notable, although they have had their challenges in their nuclear force, that the British have never chosen to risk their tactical expertise in meeting their nuclear power demands. Royal Navy submarine captains get some nuclear power training, but they do not serve as engineers. I think that the British are right. My own experience is that I was very hard pressed to ensure that I was sufficiently expert as a surface warfare officer with the minimum mastery of combat systems and tactics necessary to fight the ship. I was also always acutely aware that my captains – and the ships’ companies with whom I served – demanded nothing less.

I do not have an engineering degree and I have also always had to work hard to ensure that I have had what I think is sufficient mastery of all aspects of ship design and propulsion to be an effective sea officer and, later, sea commander. Yet this was always in support of my primary functions, not such a function itself and this is the real point. Could I have known more about engineering? Yes, but at what cost to my warfare expertise? Did I end up knowing enough? I once had an exchange with my – extremely efficient and truly expert- platform (or what we call ‘marine’) engineer officer ashore over a beer one night. ‘Sir,’ he said, ‘I know that both your undergraduate and postgraduate degrees are in history. How is it that you always know the question to ask me that I don’t want you to ask me?’ ‘Simon,’ I replied, ‘I’m the captain, it’s my job.’ I still treasure that as one of the greatest professional compliments I have ever been paid – but I think it is one that, at least in part, I had earned. I will say here that the training system through which I passed allocated more time to engineering theory and practical engineering training for surface warfare officers than does the ‘objective focused’ system of the present day. There is a minimum required and I am not convinced that it is being met in either the RAN or the Royal Navy.

The point, however, is that my job as a captain was not to be the engineering officer, nor attempt to do his or her job. Mine was to be as expert as possible in driving and fighting my ship to achieve its military purposes. I am deliberate in suggesting that the platform engineering specialisation is not the ideal preparation for combatant command – although I have no objection to such officers commanding auxiliaries and non-combatant units, provided that they have had sufficient time on the bridge. Let me emphasise that I am not suggesting that officers with a platform engineering background are necessarily ineffective as combatant captains. What I am saying is that the individuals concerned would be much better off – and much better war fighters if they were differently prepared. There just isn’t enough time to do otherwise.

Let me return to explain one point – my view that the USN system can be better for a navy. If one is to accept that platform engineers as a group must be ‘Engineering Duty Only’, this must not result in their exclusion from the highest levels of decision making and influence. The USN has achieved as much as it has in the last seventy and more years because it got its platform engineering right so many times. And where it did not, it soon knew what to do to fix the problem. This must continue.

However, I do believe that the USN has evolved a generally more effective approach to combat systems management than the RN or the RAN both at sea and ashore. This is another area in which there could be more theory and practical training for warfare officers within our organisations. While I assess that there is a vital space for the specialists that the British describe as ‘Weapon Engineers’, I do not think that the British (and Australian) system has allowed surface warfare officers to develop sufficient understanding of their technology and the operation of their weapon and sensor systems since the old warfare sub-specialisations such as gunnery and ASW were replaced by the Principal Warfare Officer concept in the 1970s. The PWO possessed a much improved ability to make a correct, no-notice response to an immediate threat, no matter whether it was from over, on or under the sea, but it was partly at the expense of the much deeper system knowledge of his predecessors and to the detriment of a much more equal relationship with the Weapon Engineers who were and are responsible for the preparation, maintenance and readiness of the weapons, sensors, computers and communications concerned. Our navies have a lot to do in this area.

I don’t have any simple solutions for all this, but I will finish with one point. Whatever career system is adopted, it will only work if a truly professional attitude is adopted by all concerned. This includes, above all, a welcoming and inclusive approach to the new joiners that makes it clear that high standards are essential, but provides every opportunity to them to achieve their professional goals. Command at sea remains one of the most worthwhile experiences it is possible to have, but central to its value is encouraging and developing the young. None of our navies have always been as consistently focused on this as we should have been, but it is vital. As a very distinguished admiral once said, “You spend your first command proving yourself to yourself. You should spend your second and subsequent commands proving other people to themselves.”

He was – and is – right, but it also applies to every step in the surface warfare officer ladder. We all need to remember that we are there, amongst other things, to train our relief