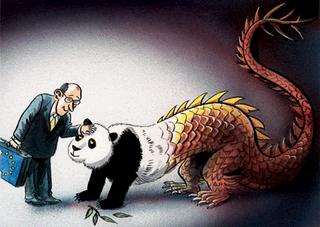 This is the third of a three-part series. See Jake’s first article here and second here.

Criticism
Justin Logan outlines an alternative critique of America’s “pivot” toward Asia and a maritime presence that counters China’s growing military power. According to Logan, the “liberal internationalist” or “optimists” (also known as “Panda Huggers”) represented by G. John Ikenberry, “elide the zero-sum nature of military questions, hang too much on faith that political liberalization will happen, and will resign China to American military dominance, and similarly place too much faith in the power of international institutions.” On the other hand, “realists” or “pessimists” (also known as “Dragon Slayers”), represented by John J. Mearsheimer, “have not shown how Washington could squash Chinese economic growth at an acceptable cost, and do not demonstrate directly how even a much more powerful China would threaten the security of the United States.” He suggests that “Beltway elites” have adopted “an inherently contradictory approach, congagement, that borrows problems from both schools of thought and creates a new problem: free riding.” [1]

“Congagement” creates several problems. America’s attempt to act as “the balancer of first resort” becomes more costly as China becomes more wealthy and capable of fielding an ever-more effective military. By “infantizing” allies in the region, they do not see the need to invest in their own defense, instead relying on American security guarantees. Japan, South Korea, Thailand, the Philippines, Australia and others should come together to deter Chinese aggression without America doing it for them. [2]

The United States should instead “pivot home.” It must “revisit formal and informal U.S. security commitments in Asia with a clear eye trained on what it would actually be willing to fight a war with China over, and just how likely those scenarios are.” Policymakers should “work to lessen and ultimately remove the forward-deployed U.S. military presence in the region, helping establish more powerful national militaries in like-minded states” and “encourage Asian nations to work together on security issues without the United States leading the way.” Otherwise “it likely will see its allies unable to play a larger role, and a larger share of America’s national income dedicated to containing China on their behalf.” [3] 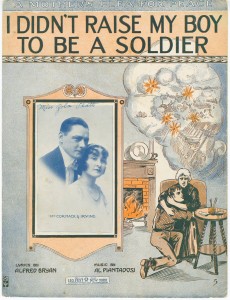 Logan’s critique builds upon the strong “libertarian” or “isolationist” strain in American foreign policy going back to the days of Thomas Jefferson, and perhaps best embodied today by Senator Rand Paul and his father, former Congressman Ron Paul. It has a popular appeal, one in which the United States avoids involving itself in the affairs of other nations and the “entangling alliances” of the former European powers. In this view, America can best serve its national security and foreign policy interests by having a military capable of defending its political territory and using that power only in self-defense. While America can serve as an “international example” of freedom and economic liberalization, it should avoid a muscular policy with broad strategic interests, one in which the United States is the predominant military power and international leader.

Despite its appeal, Logan’s critique leaves much to be desired. Neither the “liberal internationalist,” “realist” or “congagement” policy perspectives argue that American allies will rely solely on American security guarantees. Indeed, evidence suggests that while China’s defense spending has certainly increased substantially from 2000 to 2011 ($22.5 billion to $89.9 billion), so has that of America’s allies and other security partners. Japanese defense expenditures rose from $40 billion to $58.8 billion, South Korea’s rose from $17 billion to $29 billion, and Taiwan’s rose from $8 billion to $10 billion. Indian defense spending surged 47.6 percent over the decade, reaching $37 billion. [4] The evidence that Asian nations are “free riders” does not appear compelling as Logan would have us believe.

The historical experience since the end of the Vietnam War has shown that the American presence is Asia is a stabilizing force, counter to Logan’s claim. He does not appreciate the context of the 19th and 20th Centuries. For example, Japan’s growing role in regional security would not be possible without American leadership (and influence on) Japanese policy. Logan at one point highlights recent security agreements between the Philippines and Japan as an example where America was not needed. Yet he fails to understand that without the American security umbrella (and still tacit influence over Japanese defense policy), the Philippines would almost certainly not enter into any security agreement with their one-time occupier. The same holds true for South Korea, whose experience with Japan includes more than a century of occupation. Can one seriously believe that the Japanese and South Koreans could or would work together without America’s leadership (and forward presence) in the alliance structure?

Logan is right that policymakers must think seriously about under what scenarios the United States might find itself drawn into conflict with China, but he seems to downplay how likely those scenarios are. The fictional scenario considered in Part I is not out-of-the-question. Indeed, it may be more likely than any Taiwan-related scenario because the chances of miscalculation on the part of China are much higher. China may perceive territorial conflicts over small islands in the South and East China Seas much easier to accomplish than a forced reunification with Taiwan. Logan suggests that those types of conflicts would result in more economic harm to China, and it would not be in their economic self-interest. Setting aside the conceit that an American sitting comfortably in Washington D.C. is just as capable of determining Chinese self-interest as the Politburo in Beijing, he again ignores history. Economic interdependence rarely deters war. Thucydides’ observation over 2,500 years ago is still true today – nations go to war because of fear, honor and interest. Matters of security, national honor and fear will always trump trade agreements.

The siren song of isolationism is strong, and the burden of world leadership is great. However, we have already been through periods of American disengagement, especially after the First World War and we’ve seen how this plays out. While Logan is right to demand that policymakers outline the explicit threat to American national security China poses, he is wrong to suggest it is small.

Conclusion
Maritime power provides American policy makers with significant benefits, perhaps none more important than time. Forces can be replaced, space can be regained, but time cannot. Any conflict with China will require significant political considerations of the objectives to be attained while at the same time slowing escalation into a larger regional or global war. Maritime power does not pose a direct, immediate threat to the regime’s survival in Beijing, and may permit the political leadership on both sides to reach an acceptable end to the conflict should hostilities ensue. At the same time, should the conflict escalate, sea control will become a prerequisite for any hope of defeating China on land, as unpalatable as that option may be.

Maritime power is also a more politically viable alternative in an age of budget austerity. It will meet our strategic security needs while providing flexible options to policy makers on appropriate responses to security challenges. This is not to suggest that the development and modernization of long-range strike platforms, amphibious assault ships, logistic facilities or scouting systems will be cheap. They will not. Yet we need not consider maritime power solely from the perspective of large surface combatants, long-range bombers or nuclear attack submarines. Smaller, stealthier and faster surface combatants armed with ASCMs or unmanned vehicles (surface, subsurface and air) as well as improved cyberspace capabilities can provide a significant “bang for the buck”.

Political viability is also important when considering international cooperation. As John Hattendorf notes, “Of the various kinds of military forces—land, air, and maritime forces – only navies and coast guards have the ready and established ability to be both weapons in war and benign elements in peace.” [5] International political support will require a credible military deterrent while maintaining a light footprint.

The pivot to Asia demands a rethinking of American maritime power and how we are to defeat China in a conflict. Thinking about and preparing for such a conflict will reassure allies and friends while signaling to China that we are willing to fight. Showing a sense of resolve will prevent miscalculation on the part of China’s leadership, allowing us to continue our policy of engagement. Our national security depends on our continued leadership in Asia. Cole reminds us: “It will remain America’s responsibility to maintain its economic and military presence, as well as the historic character of American ideology, if Chinese maritime hegemony is not to prevail in Asia.”

About the Author
LT Robert “Jake” Bebber USN is an information warfare officer assigned to the staff of United States Cyber Command. He holds a Ph.D. in Public Policy from the University of Central Florida. He lives in Millersville, Maryland with his wife, Dana and their son, Vincent. The views expressed here are his own and do not represent the U.S. Department of Defense, Department of the Navy or U.S. Cyber Command. He welcomes your comments at jbebber@gmail.com.