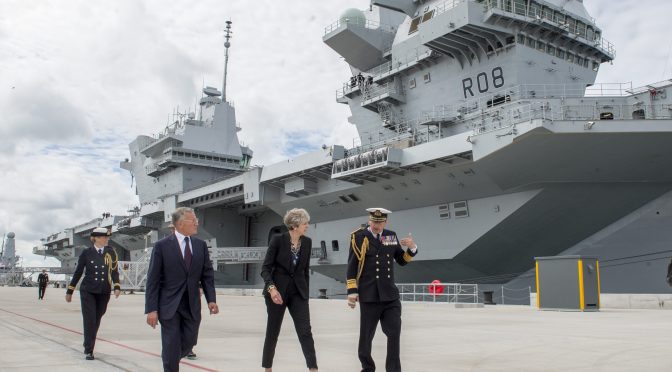 In July, two major announcements were made renewing the Royal Navy’s commitment to the principle of freedom of navigation in the coming years. Firstly, the Secretary of State for Defence, the Right Honourable Michael Fallon, told Reuters that Britain was intending to send a warship to the South China Sea in 2018. The Defence Secretary explicitly stated that, “we have the right of freedom of navigation and we will exercise it.” In a direct reference to China, he added, “we won’t be constrained by China from sailing through the South China Sea.” Shortly afterward, the Foreign Secretary, the Right Honourable Boris Johnson, announced that the Royal Navy’s new aircraft carriers (the first of which is currently undergoing sea trials in UK waters) would deploy to the Pacific region to conduct freedom of navigation operations “to vindicate our belief in the rules-based international system and in the freedom of navigations through those waterways which are absolutely vital for world trade.” This statement develops remarks made by Sir Kim Darroch, the UK Ambassador in Washington DC, at the end of last year.

The significance of these declarations by senior government ministers and diplomats should not be underestimated. Indeed, they have provoked a swift reaction from Chinese officials who have warned countries from outside the region from stirring up trouble. In a barely-veiled reference to recent UK military operations, Chinese foreign ministry spokesman Lu Kang stated pointedly, “Whoever they are, under whatever pretexts and whatever they say, their precedents of interfering in other regions on high-sounding reasons but only leaving behind chaos and humanitarian disaster warrant sharp alert of regional countries and people.”

Freedom of navigation is not a recently discovered concept for the British. When a Spanish ambassador had the temerity to complain to Queen Elizabeth I about the voyages of Sir Francis Drake in the Pacific Ocean in the sixteenth century, she replied with one of the clearest early statements on the freedom of the seas: “The use of the sea and air is common to all; neither can any title to the ocean belong to any people or private man, for as much as neither nature nor regard of the public use permitteth any possession thereof.”1 Although her successor to the throne, King James I, flirted with the idea of nations having dominion over the oceans (mainly to protect Scottish fishing rights), it was still accepted that prohibiting innocent passage would be contrary to the dictates of humanity.2 By the early seventeenth century, Britain, by then a major maritime power, had recognized the benefits of oceans being open to all and has been a loyal adherent to this policy for the past 350 years. In the twentieth century, this commitment manifested itself during the negotiations which produced the United Nations Convention on the Law of the Sea (UNCLOS). UK diplomats made significant contributions to the development of some key concepts relating to freedom of navigation, such as the right of transit passage through international straits, later adopted by all the signatory nations.3

Although the UK has supported freedom of navigation as a matter of principle for centuries, its economic and practical impact for a leading world economy should not be ignored. The two are inextricably linked. In a recent address to a multi-national workshop on freedom of navigation and the law of the sea at the U.S. Naval War College, noted University of Virginia professor Ambassador John Norton Moore (ret.), a member of the U.S. 1982 UNCLOS negotiating team, stated that the provisions of the treaty “for freedom of navigation are of the utmost importance in protecting global trade, one of the core mechanisms for global economic growth.” The United Nations estimated that in 2011, nearly half of the world’s annual trade by sea passed through the Malacca Straits and the adjacent South China Sea. The economic arguments for maintaining navigational rights in this region are unassailable, especially as the UK develops new trading relationships with Asian partners following its planned withdrawal from the European Union.

Historically, the UK has not conducted a formal program of freedom of navigation operations in the manner that the U.S. has. Of course, ships of the Royal Navy exercise their legal rights through the waters of the world on a daily basis, whether transiting through key straits or conducting innocent passage through territorial waters of coastal states. Their presence provides security for commercial shipping of all nations that are exercising similar rights. The exercise of these rights is no different to the navy of any other country in the world (Chinese ships recently transited through the Dover Straits on their way to conduct exercises in the Baltic, a practice also seen from Russian ships). However, by highlighting these operations years in advance, the UK has given them added strategic significance. This approach does not form part of the U.S. program. Current U.S. policy seems to be that such operations are only confirmed retrospectively in the annual Department of Defense report. On the basis of announcements to date, the UK seems to be taking a more overt and open approach to the conduct of freedom of navigation tasking. As noted by Dr. Euan Graham, the use of an aircraft carrier would also be a significant change from current U.S. tactics.

The actual operations are unlikely to appear dramatic and will probably be similar to those conducted by U.S. ships under Presidents Obama and Trump. One of the key considerations for the UK will be to clearly articulate what is being challenged by any particular operation to avoid inadvertently strengthening illegitimate claims (as discussed by Professor James Kraska in relation to U.S. operations here). In all likelihood, these operations will consist of straightforward passages possibly coupled with routine exercises such as a man overboard drill although such operational decisions are clearly speculative at this stage. But these actions speak louder than words. They demonstrate the resolve of the UK to maintain the rule of law at sea throughout the world, to support partner nations in the region which are committed to this concept (including countries such as Japan and India), and to continue a historic association with one of the oldest norms of international law. The UK has designated 2017 as the “Year of the Navy” and this commitment to conducting freedom of navigation operations halfway around the world shows both the value that is placed on this right and the resurgent capability of the Royal Navy to take action to preserve these freedoms.

Lieutenant Commander Peter Barker is a serving Royal Navy officer and barrister. He is currently the Associate Director for the Law of Coalition Warfare at the Stockton Center for the Study of International Law (@StocktonCenter), part of the U.S. Naval War College.  He can be contacted at peter.barker.uk@usnwc.edu.

This post is written in a personal capacity and the views expressed are the author’s own and do not necessarily represent those of the UK Ministry of Defence or the UK government.