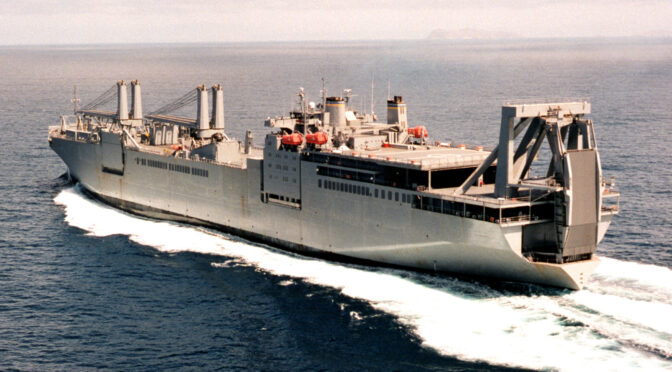 By Nicholas Ayrton and Brandon Walls

Ensuring the strong naval presence and military deterrent of the United States also means guaranteeing that American troops will get the supplies they depend on, no matter where confrontation may arise. As a key provider of surge forces to crisis locations around the world, United States Transportation Command (USTRANSCOM) must confront any and all potential challengers it might face in the 21st century, specifically the rising maritime power of the People’s Republic of China. Challenges USTRANSCOM could face in this regard are threefold—the aging and inadequate nature of the American sealift force, the vulnerability of said forces to strategic chokepoints in the event of conflict, and the versatility and strength of the Chinese People’s Armed Forces Maritime Militia (PAFMM).

The growing age of the ships available to the United States for sealift operations is perhaps one of its most obvious and most dangerous problems. With an average age in excess of 40 years, many of these ships are either outdated or would need to be retrofitted to maintain the standards of a modern force. To add to this, the size of the fleet itself has dwindled greatly, such that it is nearly a tenth of what it was during the early years of the Cold War, an era where similar pressures for a rapid movement of men and materiel were an object of much concern. While some of that decline could be explained by the scaling down of the fleet after the Second World War, the fact remains that the current fleet is woefully inadequate to fulfill the needs of the United States Armed Forces during a time of major conflict, to paraphrase General Stephen Lyons, the current commander of USTRANSCOM.

While the United States could simply seize ships for use during wartime, as it has done in the past, it still needs capable crews for such vessels, rendering this a half-solution to a critical vulnerability in the event of a conflict. A more expensive proposition, though perhaps economically beneficial in the long-run, would be to begin the arduous process of revitalizing the domestic American shipbuilding sector, jumpstarted by the recapitalization of the sealift fleet. Some estimates of the timetable for such a feat reach into decades of time required. Such an effort would feature challenges, such as maintaining continuity across administrations and procuring sustained funding from Congress.

One option to accelerate this, specifically for the sealift force of the U.S. military, would be the expensive option that has allowed the Chinese shipbuilding sector to grow so rapidly in so little time—heavy subsidies. Though the practice has noted adverse effects on the global marketplace, it should be considered as a serious option for the United States, if it wishes to maintain and grow its sealift capacity in the shortest possible timeframe.

A concurrent shortfall in combatant warships lends itself to an escort shortfall for the logistics force. More combatants would need to be diverted from forward combat zones and other hotspots to provide escorts and bolster logistical survivability, but at the expense of the availability of those combatants. Or the Navy would need a greater volume of sealift ships to make losses of its precious few logistical vessels more tolerable.

Global chokepoints also place limits on U.S. sealift and could provide easy avenues of attack during a time of conflict. Two chokepoints are of particular concern, with the first being the Strait of Malacca. Being one of the busiest sea lanes through which a significant portion of the world’s trade pass, the Strait of Malacca presents a unique geographic chokepoint. Forces belonging to COMSPRON 2 in the Indian Ocean and transiting materiel into the Pacific theater during conflict may be confronted by a lack of escort through what would be a contested region. What makes this even more daunting task is that while the People’s Liberation Army Navy (PLAN) may lack in a large carrier force, it has established sizable contingents of strike aircraft and missile batteries on islands in the South China Sea, which could allow for it to threaten military sealift vessels across a broad variety of Southeast Asian maritime chokepoints.

Seeing as the combined 42 sealift vessels in the Gulf of Mexico and on the East Coast would need to make use of the Panama Canal to quickly transport their cargo into the Pacific, this chokepoint presents a particularly vital area the U.S. needs to retain influence in. With Panama having recently withdrawn its recognition of Taiwan in favor of the PRC without previously notifying Washington, it is clear that American influence is facing challenges over a piece of infrastructure indispensable to American strategic goals and access. In the event of conflict, the possibility of either indirect military or political obstruction of the canal would greatly hinder the transfer of forces and supplies from the Eastern U.S. to a potential conflict zone in East Asia, with ships instead being forced to transit around the southern tip of South America, adding long delays to any deployment effort.

The United States must act to confront the waning influence in its own backyard and ensure that a nation with critical infrastructure remains a friend in the western hemisphere, lest the canal zone become yet another area of conflict in the event of a crisis in the Pacific.

The issue of the Chinese Maritime Militia must be confronted. This force operates largely as a paramilitary group, able to exert pressure in a given region, often through moving in incredibly large numbers to crowd out other maritime actors while bolstering Chinese maritime claims. They can disrupt civilian activities in other regions, such as by the Galapagos Islands off the Ecuadorian coast. In a conflict, these militia ships may harass, intimidate, or report the positions of transiting seaborne logistics vessels. Indeed, given the already paramilitary nature of these vessels and their crews, they may be equipped with small arms and could provide a ubiquitous and cost-effective shipping harassment force seemingly disguised as civilian vessels lurking among commercial maritime traffic.

With recent Chinese advancements in developing swarms of small suicide drones, compact containers could be filled with such an armament that, while not critically dangerous to a ship, could be useful in intimidation or general disruption of shipping operations. With this, a threat would be posed to sealift vessels attempting to supply American armed forces in the region. Vulnerable sealift vessels carrying vital military equipment could be disrupted by a swarm of hostile forces able to slip back into the stream of normal civilian traffic the moment a threat appeared.

Reviving the armed merchant vessel could provide a solution. During both world wars, merchant vessels armed with basic weaponry were far from unheard of. In those days, the U.S. faced the same problem it does today, with more transport ships needing to get to their destinations than there were available navy ships to escort them. By developing modular, containerized weapon systems and attaching small crews to handle their operation, the problem of a thinly-stretched naval escort force could be somewhat alleviated against the Chinese Maritime Militia, with logistics ships able to defend themselves against similarly lightly-armed vessels.

If the U.S. wishes to remain a global power with the ability to project influence anywhere on the globe, a strong and well-equipped navy, with a robust sealift force behind it, is a necessity. While the sealift force faces numerous issues in the event of a hypothetical conflict, solutions can be found with forward-looking thinking.

Brandon Walls is an undergraduate at the University of California, Davis.