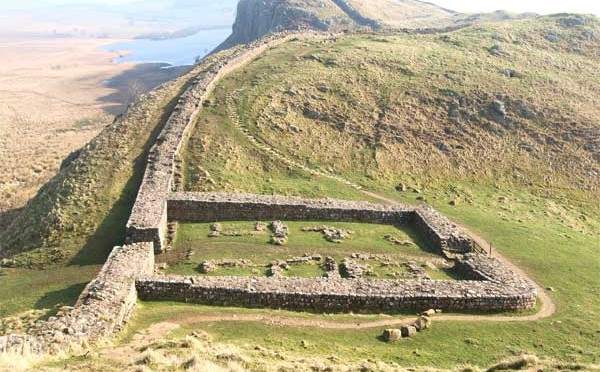 Sometime in the year A.D. 410, Honorius, the last Roman emperor to rule the Western Roman Empire before the sack of Rome by the Visigoths that year, received a request for military aid from Britain, then a Roman province.  The island was under attack by barbarians.  We do not know exactly what the letter to Honorius contained, but Honorius’ response, now referred to by historians as the Reply of Honorius, essentially told the Britons – theoretically Roman citizens who could count on the protection of the Empire – that they would have to make do on their own; Rome had troubles of its own and could not send help this time.

The Reply of Honorius is often considered to mark the end of Roman rule in Britain, as well as the end of Rome’s military dominance over any part of the empire.  Rome had all it could do to protect itself; imperial clients, whatever their legal claims to help from the central power, would have to fend for themselves.  Though the Roman Empire sputtered onward for another two generations after Rome was sacked in 410, this was the point where the central tenet of Roman rule – that Rome protected its own – was exposed as a fiction.  Nothing was the same after that.  Where Britain was concerned, the island was cut off from the Empire and never returned to it; it did, indeed, fend for itself.

There are a lot of bad comparisons made between America’s worldwide defense posture and the Roman Empire.  The two do, however, have one obvious thing in common:  in both cases a powerful state made promises to defend far-flung territories.  As with Rome, the U.S. is finding out how expensive such promises can be to keep.

As of this writing, Russian forces in Ukraine have seized the Crimea.  Ukraine is in the process of a general military mobilization, but Russian forces are already securing the strategic Perikop isthmus to the north of the Crimea, which controls access to the rest of the country; unless Ukrainian forces, with or without assistance, can similarly entrench along these lines, Russian forces will be able to break out of the Crimea and move toward strategic crossing points along the Dnieper river.  If that is the case, protecting Kiev will become very difficult, if not impossible.  It remains unclear how many Ukrainian units are even active at this point; units in the predominantly ethnically Russian east of the country have already defected or surrendered, including the Ukrainian navy’s flagship frigate.  There are an unknown but sizeable number of Russian forces on alert along the northeastern border of the country, leaving open the possibility of a general invasion.

President Obama has publicly stated that Russia would face “serious costs” were it to go forward with plans to invade Ukraine.  It is a matter of speculation what those costs may be, although it is becoming clear that there is little that the U.S. and its allies can do to stop the invasion without intervening directly.  As German Marshall Fund analyst Joerg Forbrig has remarked, there is very little evidence up to now that Putin’s government is motivated by an economic cost-benefit analysis, as opposed to nationalism and, perhaps, calculations of security.  Although the majority-ethnic Russian east of Ukraine may indeed make more sense as a Russian satellite than a fractious part of Ukraine, it is likely that Russia will seek to take Kiev, both to send a message (as was the case with its seizure of Gori in the 2008 invasion of Georgia) and because, as the ancient capital of one of the earliest Russian kingdoms, it has sentimental importance for Russian nationalists.  There is little reason to believe sanctions, or any similar actions, will stop Russia from seizing at least a part of Ukraine, or inflict any meaningful punishment on it for doing so.  Indeed, such sanctions will be hard to impose:  Europe is more dependent on trade with Russia (most notably natural gas shipments, many of which go through Ukraine) than the other way around.

From the point of view of several of the U.S.’ NATO allies, on the other hand, imposing “serious costs” on Russia, even if it could be done, means the game has already been lost:  the challenge is to prevent Russia from taking Ukraine, not punish it once it has done so.  This especially applies if Russia is not content to take the Crimea and the pro-Russian east, but decides to seize Kiev and control the entire country.  Ukraine borders on four NATO member states – Poland, Slovakia, Hungary, and Romania – and up to now has served as what might pass for a buffer zone between the Alliance and Russia; Russian ground forces in Ukraine in force – particularly western Ukraine – are therefore literally too close for comfort.  What applies to these states applies even more strongly to the three Baltic states – Lithuania, Latvia, and Estonia – all of which are also NATO members, have minimal strategic depth or defensible terrain, and share a border with Russia – and are therefore quite concerned about U.S. resolve in the face of Russian aggression.

It might have been advisable in the past to debate or question the appropriateness of NATO expansion or consider the merits of negotiating an arrangement with Russia with regard to eastern Europe; now, however, the U.S. has given its word to defend practically all of eastern Europe from Russian military attack, Russia is now expansionist and hostile to U.S. interests, and the eastern European states are understandably curious whether the U.S. is serious about its commitments.  The legal argument that Ukraine is not a NATO member and that therefore the U.S. has no obligation to it is a hair they are unwilling to split.  What they see is an American patron that was caught flat-footed by a crisis, made empty threats, was unwilling when the time came to confront Russia, and was not substantively concerned about their well-being.  If the situation in Ukraine is not quickly brought under control, America’s nominal allies in eastern Europe may make the same difficult calculation that Finland made in the last century:  that no outside ally can be relied on, and that they would do better to make their peace with Russia.  The result would be a hollowed out NATO, perhaps even leading to a disintegration of the Alliance over the longer term.

Although eastern Ukraine, as a pro-Russian region at odds with the new government, may be too far gone to save, and although its detachment (de jure or de facto) from the rest of the country might in any case form part of a negotiated settlement, there is a rapidly closing opportunity to stave off the worst possible outcome of the crisis – Russian conquest of the country with no meaningful U.S. response.  To deter Russia from making further inroads into the country, the U.S., with Ukrainian Prime Minister Yatsenyuk’s consent, would need to deploy a rapid reaction force to western Ukraine, effectively signaling that it might become involved if Russia moved to take the western half of the country, and hopefully deterring Russia from moving on Kiev.  (It might still be possible to secure the neck of the Perekop Isthmus and block off the Russian forces’ main route out of the Crimea, but if reports are true, it may be too late.)  The next best option could be the placement of a similar force along the border of any of the neighboring NATO states, as a precaution and show of resolve, and to preserve some options if the situation got worse.  (CIMSEC’s Robert Rasmussen has eloquently summarized the available forces and possible order of battle.)  Unfortunately, the window for action is closing, if it hasn’t already:  it would take a while for forces from EUCOM to get to Ukraine, and time is becoming scarce; arranging logistics would likewise be difficult.  If there was a time for action, it was when Russian forces along the border went on alert for an “exercise” last week – precious time has been lost.  As goes the U.S., so will go other NATO states.  The NATO states that border Russia and Ukraine will be watching what happens.

It may well be the case that a negotiated solution to the conflict is both the best option and even the inevitable one.  Unless the U.S. moves directly to deter a general assault on Ukraine, however, there will be little to negotiate with.

But in fact the U.S. faces a much more difficult set of options than even all this would suggest.  Russia and the U.S. have been cooperating on Afghanistan; as has been noted, Russia is a major link in the tenuous supply line that supports U.S. operations there.  Confronting Russia over Ukraine could jeopardize not only operations in Afghanistan, but potentially the safety of U.S. forces there.  It might be possible to find alternate supply routes, but not at short notice.  The ugly reality is that the U.S. might have to choose between breaking its promises in Afghanistan – drawing down faster than it otherwise would – or failing to demonstrate sufficient resolve in eastern Europe.  At least in terms of preserving a global balance of power that keeps America safe and powerful, Europe is undoubtedly more important – but it will hurt either way, if the choice does ultimately have to be made.

Either way, the U.S. is in danger of issuing its own Reply of Honorius – those whom we have promised protection may have to rely on their own resources.  There may still be opportunities to make the best of this situation and even turn it around, but time is fleeting:  what happens this week may make all the difference in the world.

Martin Skold is currently pursuing his PhD at the University of St. Andrews in Scotland, with a dissertation focused on analyzing long-term security competition between states.

3 thoughts on “NATO on the Edge: Obama’s Reply of Honorius?”