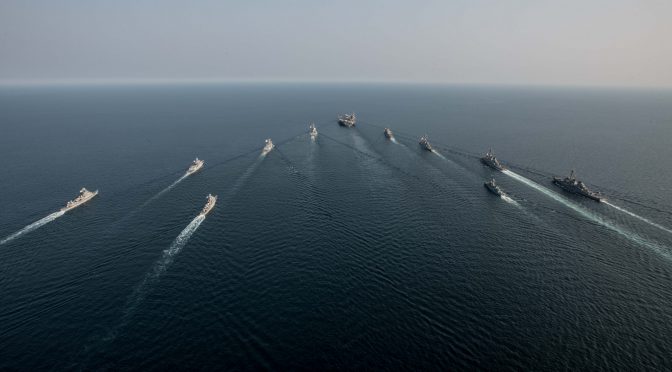 Last week we featured short submissions that offered advice to the incoming administration on the U.S. Navy. Responses covered shipbuilding, foreign relations, applications of maritime power, and other issues. Read their responses below.

Mercy of the Dragon by Joshua A. Cranford

“Yet the United States heavily relies on China’s 95% dominance of the REE market for economic prosperity and to conduct global security and naval operations. If China decided tomorrow to embargo these elements how long would America continue to prosper and meet its operational needs?”

“The U.S. Navy provides the maritime superiority required to keep the homeland safe, preserve global influence, deter aggression, and win the Nation’s wars. Ever since the Spartans and the Romans put to sea, nations have understood the two fundamental purposes of Navies: secure their borders and protect commerce.”

“The incoming administration must grasp two things about the U.S. Navy as it assumes power. The first is that the overarching purpose for the U.S. Navy is to guarantee global freedom of the seas.”

The Challenge: Rediscovering the Offense by Richard Mosier

“The current generation of naval officers has grown up in an environment in which the U.S. Navy has been focused on strike operations in a relatively benign, third-world threat environment. In that environment, the surface navy has focused overwhelmingly on fleet defense and net-centric operations, with little need to grapple with concepts for the offense against a maritime near-peer.”

“The incoming administration needs to know that the U.S. Navy is a forward-deployable and ready tool of statecraft for the United States. It builds on a long tradition and utilizes the opportunities afforded by geography, the maritime domain, and international law to engage with allies, conduct naval diplomacy, deter crises, and provide options towards favorable outcomes in a conflict.”

An Open Letter to Our Negotiator-in-Chief: Fix Navy Acquisition by Travis Nicks

“Mr. President-Elect, be our champion and negotiate a better situation. Please sign a law, issue a contracting regulation, or create an executive order that ensures that when acquisition contracts are negotiated the government owns both the IP and the technical information—specifically technical drawings and specifications—associated with the complete system.”

Keep It Simple by Brody Blankenship

“The Navy is the foundation of America’s expeditionary capability, therefore it will continue to be an integral component of military force in any conflict. However, this amazing force has been mismanaged and deflated beyond optimal limits, leaving the incoming administration much to fix and a disproportionately small budget.”

“It is imperative that the United States maintain naval forces that can sustain our national commitment to global maritime security. The biggest impediment to maintaining that force is the lack of a fully funded shipbuilding program that produces the right quantity and quality of ships, with the right capabilities, for the right price.”

Enhance Maritime Presence in the Indian Ocean by Vivek Mishra

“The Indian Ocean together with the maritime area of the Asia-Pacific should be on the high priority list for the next Administration. The region has been witnessing a twin factor rise in its importance: the rise in trade transmission through the Indian Ocean has increased tremendously over the past decade, besides witnessing a dramatic ascendancy in strategic importance owing to vulnerabilities of geographic choke points and more importantly, an ever increasing Chinese presence.”

More Than Just a Tool of Policy by Anthony Orbanic

Naval Priorities and Principles for the New Administration by Anonymous

“The Navy is a limited resource that is most effective when given clear policies and permissive rules of engagement (ROE) and when allowed to have a strong voice in the decisions and policies governing its deployment.”