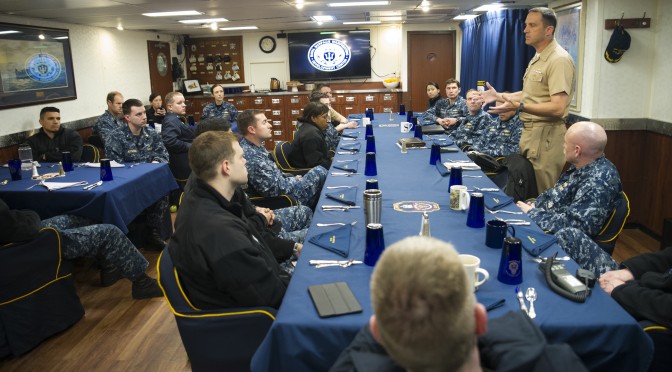 To close out Distributed Lethality Week, VADM Rowden, Commander, Surface Forces, was kind enough to add his own piece to the milieu.

Once again, I am really pleased to see CIMSEC out front and leading with respect to providing a timely forum for information exchange and professional learning.  That you’ve chosen to focus on Distributed Lethality this week is an exciting development, and I look forward to checking in on the dialogue and getting a sense of how well the idea is catching on and where we might need to do a little more work in addressing concerns and criticisms.

Since we debuted Distributed Lethality six months ago at the Surface Navy Association Symposium, a team of superstars in DC, at my headquarters in San Diego, and from around the fleet have been doing the really hard work of putting the meat on the bones of what was admittedly an aspirational concept when I introduced it.  Don’t get me wrong—the basic concept of increasing individual warship lethality and then combining surface warships in innovative ways makes straightforward sense to virtually anyone who will listen.  But as with anything that will likely cause generational change in an enterprise as large as Surface Warfare, there are tough analytical questions that have to be answered, there are important questions of priority and timing, and there are critical questions of “how much?” and “how widely distributed?” the force can be.  This is what the Distributed Lethality team is working on, and we’ll convene in Newport in two weeks for our second series of wargames designed to get at some of the things I just mentioned.

The subject I really want to focus on with this piece however, is the human side of Distributed Lethality, represented by the Naval Surface and Mine Warfighting Development Center that we stood up last month in San Diego under the command of Rear Admiral Jim Kilby.  A lot of folks are likening NSMWDC to naval aviation’s Top Gun program, and I think there is something to that comparison.  For decades Top Gun has produced finely-honed tactical experts in the LT/LCDR grades — experts who then go back to their parent squadrons or wings and raise the tactical proficiency of those organizations.

Like a drop of dye in a glass of water, we look for a new generation of Surface Warfighting experts—Warfare Tactics Instructors (WTI)—to change the very character of our profession.  NSMWDC is part of the solution and will oversee the selection and training of those WTI’s – the ship’s CO’s are another part, integral in the selection of our WTI’s.  In essence, we are “distributing” the human factor in Surface Warfare.  We are investing in our junior officers in order to ensure that our crews are able to get the most out of training and the investments we are making in weapons and sensors.

We are looking to increase the warfighting professionalism of the force; to bring a new emphasis on tactics, tactical thinking, and tactical training, and we are going to do so one staff and one ship at a time.

Let’s face it, it is high-time we did this.  Our ships are powerful and sophisticated, and the future upgrades we’ll field will demand a higher level of tactical acumen to wring the most out of them.  While the mechanics are classified, I’m here to tell you that Navy Integrated Fire Control-Counter Air (NIFC-CA) engagements are not a trivial undertaking.  They will require considerable training and coordination across battle force components, but it all starts right in our Combat Information Centers.

We need to get more proficient in Mine Warfare.  But a different kind of Mine Warfare, one where we don’t steam into the middle of the minefield and then sweep.  Rather, we’ll stand-off and position a variety of surface, subsurface, and air deployed sensors that make up the LCS MIW mission module.

With respect to Anti-Submarine Warfare, the AN/SQR-89V(15) processing system presents operators with information at ranges that were — up to now — virtually impossible to gather.  We need to get back into serious passive localization techniques that enable us to exploit the detectable sound-sources of even the quietest energy submarines.  We need to move more quickly with less information to “good enough” targeting solutions.  Solutions that allow either a surface-based weapon system or an air-deployed weapon to put the submarine on the defensive so he no longer is capable of targeting us with HIS anti-ship weapons.

In Anti-Surface Warfare we’ll be right back in the War at Sea game.  First with a medium-range weapon we’ll field on the FF’s, and then on a longer range—and potentially supersonic—weapon that we’ll field on larger combatants.  We’ll be able to hold a greater number of things that adversaries value at risk while making every one of us a more interesting target for their ISR systems.

NSMWDC will eventually graduate more than 100 WTI’s a year; these officers will then go on to be XO’s and CO’s, and Strike Group Commanders.  Distributing the power of human talent more broadly across our fleet makes a lot of sense as we distribute lethality within our ships.  I look forward to providing CIMSEC readers (and anyone else who attends) with a full update on the progress of the analytical effort involved with Distributed Lethality at January 2016’s SNA.  An additional part of that update will be a continued emphasis on the demanding tactical training that our force must continue to pursue in order to get the most out of this exciting new concept.  Distributed Lethality is MUCH more than just putting more missiles on ships—it is about investing in warfighting expertise.   Let’s get to work.