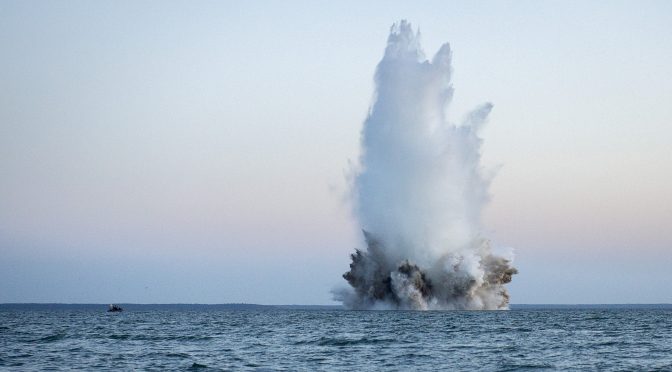 This commentary is based on Dr. Truver’s remarks at the Future Strategy Forum 2016, Undersea Warfare panel, hosted by the Center for Naval Analyses, 5-6 December 2016.

Winston Churchill observed, “The farther backward you can look, the farther forward you are likely to see.”

Looking backward, it usually comes as a surprise to learn that of the 19 U.S. Navy ships that have been seriously damaged or sunk by enemy action since the end of World War II, 15 – nearly 80 percent – were mine victims.

This vulnerability to mines has catalyzed the U.S. Navy to spend many hundreds of millions of dollars to counter a global threat that includes more than a million sea mines of more than 300 types in the inventories of more than 50 navies worldwide, not counting underwater IEDs that can be fashioned from virtually any container. More than 30 countries produce and more than 20 countries export mines. World-War I-era contact weapons bristling with “horns” can be as dangerous as highly sophisticated, computer-programmable, multi-influence mines that fire from the magnetic, acoustic, seismic, and pressure signatures of their victims. Ask Captain Paul Rinn, commanding officer of the frigate USS Samuel B. Roberts, how a mine designed in 1908 can ruin your day.

Of particular concern are the mining capabilities of potential adversaries:

Instead of discussing countermeasures to adversary weapons, this analysis is about our mines and mining in late 2016, how they might contribute to the Navy’s strategy, and where innovation might be leading us.

America’s mines have been a factor in virtually every conflict since Ezra Lee navigated David Bushnell’s Turtle in a frustrated attempt to screw a “torpedo” – today what we would call a limpet mine – into the hull of Lord Howe’s flagship HMS Eagle in New York harbor on 6 September 1776. Therefore, it is not too much of a stretch to say that U.S. undersea warfare began with an IED/mine “event.”

Leaping over two centuries of U.S. Navy mine warfare history, during the Cold War, the Navy maintained a large stock of bottom mines for offense and defense. Several types of anti-submarine and anti-surface ship mines deployed by submarines and aircraft entered service in the 1950s and 1960s.

Later, mine inventories included Mark 36/40/41 Destructor shallow-water general-purpose 500/1,000/2,000-pound bombs fitted with mine target detection devices; the Destructor mines first deployed in 1967 and saw wide employment at sea and on land during the Vietnam War – some 11,000 DSTs were laid along jungle trails. The Mark 60 deepwater CAPTOR – enCAPsulated TORpedo – that encapsulated Mark 46 torpedoes within mine cases entered service in 1976, intended to block the Greenland-Iceland-United Kingdom (GIUK) gap to Soviet submarines in the event that deterrence failed. This was soon followed by the Mark 67 submarine-launched mobile mine – SLMM – that entered service in 1983 and could be covertly laid in vital areas.

But with the end of the Cold War, the Navy’s mine capabilities began to atrophy. Today, no conventional mines remain in service, the CAPTORs have been retired, and at one point the Navy had programmed the remaining obsolescent SLMMs to be phased out in 2012. Had that been carried out, our attack submarines would have had no mining capability at all. As it was, only direct intercession by CNO Admiral Greenert saved a handful of SLMMs until something better comes along, if it ever does given competing submarine missions and tasks.

Remarkably, the Navy has not introduced a new mine in almost 35 years, but not without the mine warfare community trying. Various concepts for littoral sea mines were suggested in the 1990s and early 2000s – one had the U.S. Navy collaborating with the Royal Navy, and the U.S. submarine force looked into a dual-purpose convertible Mark 48 heavyweight torpedo/mine – but these were ultimately not pursued.

Even upgrades to existing mines proved to be a hard sell. Work on the “next-generation” computer-programmable Mark 71 target detection device for the Quickstrikes began in 1991, but initial procurement began more than two decades later. Other priorities competed for attention and scarce resources.

That is revealed by Navy budgets since the fall of the Berlin Wall: on average less than one percent of Navy Total Obligational Authority has been spent on MIW, total, and the author believes mine programs get maybe five percent of that.

Even if resources could be found, however, the availability of aircraft, airborne tankers, and defensive escorts for mining campaigns is uncertain. There will certainly be intense competition for such aircraft in future crises and conflicts.

The 1991 Gulf War was the last time that the Navy deployed mines in combat. Four A-6 Intruders planted a tactical minefield of Quickstrikes at the mouth of the Kwahr az-Zubayr River to deny Iraqi access to the northern Gulf. One aircraft was lost to ground fire, and there were no indications that the mines actually sank or damaged any vessel. Aircraft-deployed Quickstrikes have less-than-optimal accuracy, even less precision, and are best deployed in less-than-contested environments and at dangerously low altitudes. Innovation in mines and mining directly addresses these operational challenges.

Reinvigorating the Mine Warfare Enterprise

As Major General Chris Owens, USMC, Director Expeditionary Warfare (N95) has underscored, “the strategic objective should be to make our adversaries worry about our mines as much as their weapons concern us.”

In September 2014, U.S. Pacific Command (PACOM) demonstrated an extended-range Quickstrike-ER – a modification of the 500-pound winged Joint Direct-Attack Munition (JDAM-ER) – dropped from an Air Force B-52H bomber at 35,000 feet. According to Air Force Colonel Mike Pietrucha speaking at the Mine Warfare Association seminar in November 2016, this was the first-ever deployment of a precision, standoff aerial mine. A subsequent effort among PACOM, the Navy, and the Air Force successfully tested a 2,000-pound Quickstrike-J deployed by a B-52H.

“This effort marked the first advance in aerial mine delivery techniques since 1943,” Pietrucha continued, “and demonstrated a capability that substantially changes the potential of aerial mining in a threat environment.”

This QuickStrike/JDAM innovation could have a revolutionary impact on U.S. mines and mining, as Colonel Pietrucha underscored: “The mines have JDAM accuracy with respect to their selected impact point on the water surface, and the ability to place a 2,000-pound mine within six meters of a specified aimpoint on the bottom at ranges greater than 40 nautical miles is unprecedented.”

The takeaway from these tests is that any pilot trained for and any aircraft equipped to drop the JDAM can be a mine-layer, not just once, but many times. And, in the case of USAF bombers – our only high-volume mine layers – an entire minefield can be laid in a single pass without directly overflying the minefield.

Important for a Navy warfare area that sees its weapons and systems delivery stalled, Pietrucha noted, “Both variants are assembled entirely out of components already in the U.S. inventory, making these weapons possible without a protracted acquisition process.” The JDAM conversion kit costs about $20,000.

Looking farther into the future, boffins at the Office of Naval Research (ONR) and the Navy’s Surface Warfare Center, Panama City (NSWC-PC) are working on several innovative advanced undersea warfare systems (AUWS) that can be delivered by unmanned surface or submarine vehicles.

In October 2014, Admiral James Winnefeld, Vice Chairman of the Joint Chiefs of Staff, visited Panama City to learn more about remote-controllable “smart mine” innovations. In January 2015, he accompanied Deputy Secretary of Defense Robert Work to explore how future smart mines could contribute to the Third Offset Strategy. Responding to such high-level DoD interest and a mining joint emergent operational need statement, investment in AUWS and something called the Modular Undersea Effectors System – MUSE – is ramping up.

Panama City’s MUSE envisions innovative mining using “encapsulated effectors” to carry out important tasks, in addition to mining.  The concept sees forward-deployed ­– on the seabed in international ocean space, much like SOSUS or CAPTORs – unmanned stationary nodes for remote or autonomous unmanned air/surface/undersea/seabed vehicles (UxVs) to populate the “encapsulated effectors.” These “effectors” include mines, torpedoes, missiles, decoys, jammers, communication nodes, electronic warfare payloads –virtually anything that can be packaged in UxVs and launched from seabed encapsulation nodes.

According to Panama City engineers, MUSE will be an “integral element of the kill web, offering distributed, forward, persistent, autonomous lethal and non-lethal undersea/seabed scalable effects across all phases of operations.” An encapsulated effector can achieve two orders of magnitude increase in effective range compared to Quickstrikes and SLMMs, greatly reducing the sortie burden on aircraft, submarines, or large UxVs.

The Navy intends to put in place an “Encapsulated Effector” program that would integrate the AUWS, MUSE and smart mine technologies into incrementally fielded capabilities. In short, the Navy’s mines and mining laboratory sees next-generation smart mines to be critical elements in what some observers call “sea-bed warfare”:

Churchill’s exhortation to look backward to see forward framed this discussion, so therefore, “Torpedoes [mines] are not so disagreeable when used on both sides,” Admiral David Farragut wrote to Secretary of the Navy Gideon Welles on 25 March 1864, several months before he damned the torpedoes in Mobile Bay, “therefore I have reluctantly brought myself to it. I have always deemed it unworthy of a chivalrous nation, but it does not do to give your enemy such a decided superiority over you.”

Perhaps with strong support and such asymmetric innovations as the extended-range JDAM-guided Quickstrike mines and MUSE, the U.S. Navy will enjoy “a decided superiority” over our adversaries – whether our mines are show stoppers or just speed bumps in future conflicts.