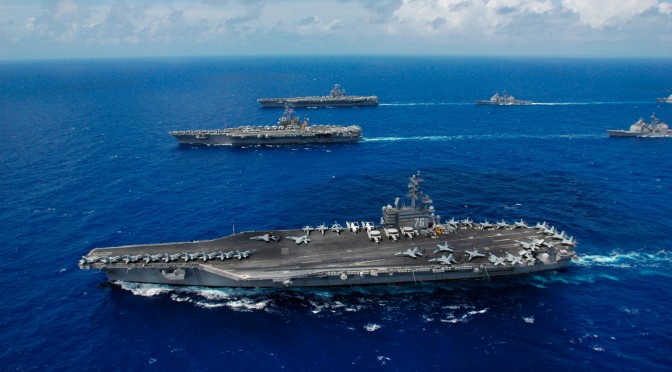 As a man who as spent entirely too much time flying in the immediate vicinity of the colloquial Death Star (and by that, I mean the aircraft carrier) over the last year, I know firsthand how forgone a conclusion naval aviation can seem. Naval aviation, as the world knows it, is a multibillion dollar power projection leviathan that literally catapults fire control solutions from mobile sovereign territory to the bad guys du jour, right? Kick the tires, light the fires, open and shut case… Or is it? From future capabilities to current funding limitations, reality is inescapably more complex.

While GCC allies transition toward hegemonic peacekeeping operations in the Middle East and posture their forces for a long term dichotomy with Iran, you can almost feel the deck of American air power at sea roll beneath your feet in new directions. Every day, the emphasis shifts incrementally away from permissive, asymmetric conflict in the Arabian Gulf and toward modern, access-denied conflict with technologically contemporary rivals. Although Operation Inherent Resolve may retain focus on surgical strikes flown overhead, our authors looked ahead to the next generation of challenges awaiting the proverbial fleet.

Speaking of ISR, how did an article summarizing the future of naval aviation go four full paragraphs without mentioning drones? Ben Ho Wan Beng arrived in time to keep my bitterness against unmanned aviation in check with a fantastic look at the rise of UAS proliferation among littoral states seeking bang for their maritime buck in his piece, “What’s the Buzz: Ship-Based Unmanned Aviation & Its Influence on Littoral Navies.”

Jon Paris gave us a taste of the war none of us want to fight in his article, “Parallax and Bullseye Buoys.” An edge-of-your-seat thriller, Jon straps you into the cockpit for an IMC, EMCON recovery onboard a lights-out carrier in hostile skies. I don’t want to live in that world, and fortunately we aren’t in that kind of extremis yet, but Jon prepares the reader. He articulated the complexities of navigating in GPS-denied airspace and the necessity of electromagnetic spectrum fluency for the modern A2/AD environment, an issue recently addressed by CAPT Mark Glover at C4ISR.

Meanwhile, what good is a debate on the direction of military planning without a healthy dose of fiscal reality? Bridging the well funded past to the unaffordable future, Timothy Walton gave us a sneak peek from next month’s report due from The Hudson Institute’s Center for American Seapower. He reviewed the shrinking scale of the carrier air wing by the numbers and illustrated unmistakable mission gaps created along the way. From the salad days of the Tomcats to the uncertain future of the Joint Strike Fighter, Mr. Walton illuminated the reduced footprint of the current air wing and possible ramifications facing the CSG of the future in “The Evolution of the Modern Carrier Air Wing.”

CDR Gregory Smith broadened the topic of integrated manned and unmanned operations with his article, “Trusting Autonomous Systems: It’s More Than Technology.” Beyond the short-term friction of terrified Djiboutian air traffic controllers, CDR Smith illustrated the essential progress required to instill the confidence required for fully integrated manned and unmanned combat operations. From C2 structures in flight to command structures in the Pentagon, the ground truth on drone warfare at sea has yet to reach IOC by any definition. CDR Smith’s article provided clear context for the way ahead.

Michael Glynn delivered the cold, hard truth on data collection efforts in Naval Aviation: if a P-8A Poseidon collects 900GB of data on a sortie with no client for the information, does it validate its R&D costs? His article, “Information Management and the Future of Naval Aviation,” provided a resounding YES while detailing the challenges facing efficient data extraction from maritime ISR operations.

Peter Marino adds international affairs into the mix by assessing the scope and implications of American technology transfer to India for the development of a powerful new carrier. Through a video review of “Making Waves: Aiding India’s Next Generation Aircraft Carrier,” he explores the unique value of naval aviation in foreign policy.

Our selections here delve into the challenges that lay ahead. I find the common thread unifying all of our authors to be the pursuit of value to the proverbial customer in an environment defined by change. What is it, exactly, that we are creating with all of this jet fuel?

The delivery of value to the stakeholder is incumbent on any military initiative from weapons safe to weapons free. On the one hand, that means providing maritime security and intelligence collection in the absence of conflict. Our authors speak from ground truth experience on the importance of developing and maintaining a cogent strategy for the proliferation of ISR and the subsequent decoding of the data collected.

On the other hand, delivering to the stakeholder requires a conscientious investment in fire control solutions against technologically advanced adversaries in denied airspace. There is no future without U-CLASS and there is no future without the JSF. These have to be integrated into the future of naval combat at least in the intermediate term. But what good is a fire control solution without C2 assurance? Are we ready for a GPS-denied environment? What will it take for tomorrow’s navy to compete in the conflicts of the future?

Ultimately, the sting of sequestration and the pain of acquisitions make the road ahead formidable. The hardest question to answer may be the most simple. What ends are we attempting to achieve by the means of naval aviation? Once our days of busting bunkers in the Middle East with precision guided munitions no longer carry the bulk of our workload, how do we leverage the unique capabilities of naval aviation across the entire spectrum of the rules of engagement to provide value to the theater commander?

It’s an exciting time to be a part of naval aviation. With such seismic shifts in sensor capabilities, adversary technological acumen, and A2/AD threat proliferation cast against cutthroat funding and acquisitions, this is not a sport for the faint of heart. Vision, flexibility, and creativity will define the success or failure of our transition to the next war we fight. Please join me in congratulating our authors on a job well done for their contribution to the next step, and feel free to join the discussion with your own feedback at nextwar@cimsec.org!

LT W. W. Hobson is an MH-60R pilot. The views expressed in this article are entirely his own and are not endorsed by the US Navy.