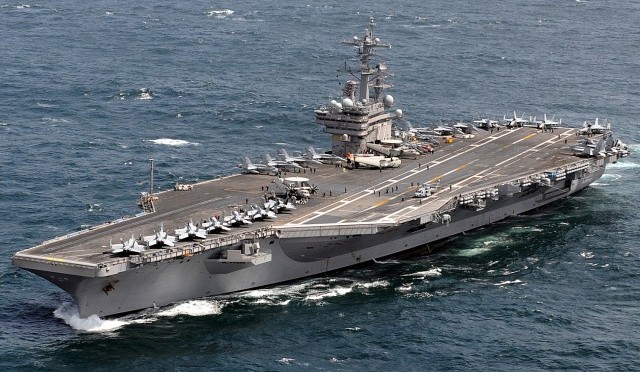 Felix is a fellow at the Institute for Security Policy, University of Kiel, Germany and runs the site Seidlers Sicherheitspolitik“. This article was published there at first

The times for good-will diplomacy are over. In response, NATO should block the Bosporus for Russian warships. Putin wants to play great power politics? Okay, let’s do it.

Choose a hard line!
The last time the Alliance has been as relevant as today was 9/11 or maybe even pre-1991. After the German-French-Polish brokered deal in Kiev has effectively failed, the EU is out of business. Moreover, Russia obviously does not take the EU seriously. Hence, Europe needs to be backed up by American power. In short, we need NATO. 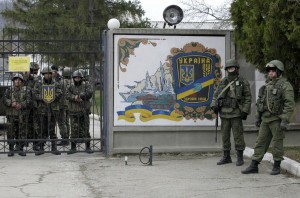 Ukrainian soldiers, left and unidentified gunmen, right, guard the gate of an infantry base in Privolnoye, Ukraine, Sunday, March 2, 2014. Hundreds of unidentified gunmen arrived outside Ukraine’s infantry base in Privolnoye in its Crimea region. The convoy includes at least 13 troop vehicles each containing 30 soldiers and four armored vehicles with mounted machine guns. The vehicles — which have Russian license plates — have surrounded the base and are blocking Ukrainian soldiers from entering or leaving it. (Darko Vojinovic/AP)

Good-will diplomacy and communiques about cooperation had their chance. They failed. Putin is pursuing a hard line and so should the West. Through NATO as a political alliance, the West should take a hard stance against Russia. Putin has already been part of the problem in Iran and Syria and he never intended to become part of the solution. Therefore, it is time that the West stops giving a damn about Russian positions.

Moreover, the UN will not be useful for anything. How could it, if Russia effectively decides what to do!? Therefore, let’s get down to business and do realpolitik as the Russians do.

Block the Bosporus!
Putin’s aim is to have Sevastopol as a naval base in the Black Sea, so that Russia is able to deploy warships to the Mediterranean. Hence, to get a bargaining chip, NATO should block the Bosporus to all Russian warships, no matter whether they are leaving or entering the Black Sea. The blockade should not apply to civilian vessels.

Supported by a NATO decision, Turkey should suspend execution of the Montreux Convention, which grants Russian warships access to the Bosporus. NATO’s policy should be: As long as Russia intervenes in Ukraine, the Bosporus will be closed for Russia’s navy. Effectively, without access to the Bosporus, Russia’s Black Sea Fleet will be useless and its warships in the Mediterranean will face serious operational difficulties. 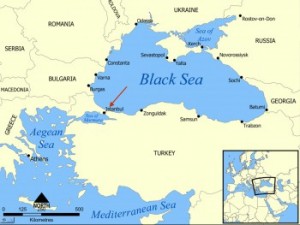 The Bosphorus marked by the red flash.

NATO should deploy one of its Standing NATO Maritime Groups to the Aegean Sea or to the Bosporus. Moreover, we need at least one US Navy vessel – maybe the USS Mount Whitney – around the theater to make clear that the blockade is absolutely serious. Thereafter, a simple deal could be: Russia leaves Ukraine and in return gets access to the Bosporus. Without that deal, Russia would keep a naval base in Sevastopol that is worth nothing.

Give Assurance to Eastern Europe
If the West does not do anything and Russia takes the Crimea, it is likely that eastern Ukraine is next. Our allies in Eastern Europe rightly worry about their security.

Personally, I have many doubts that Germany would be willing to defend the Baltic states in case of a Russian invasion. NATO/EU membership would not matter. Can you imagine Angela Merkel giving her approval to invoke NATO’s Article 5, then asking the Bundestag to approve the case of defense (“Verteidigungsfall”), re-institute the draft (which we would have to do then) and to send the Bundeswehr up to the Baltic to fight the Russians? I can hardly imagine.

Consequently, we have to renew security guarantees for our Eastern European partners now and we have to do it with more than just words. This could mean deploying additional fighters for NATO’s Baltic Air Policing. James Stavridis has mentioned the NATO Response Force as an option, which could be, according to Stavridis, brought into “a higher state of alert”. Moreover, SHAPE should develop contingency plans to respond to any assertive Russian behavior concerning NATO territory. 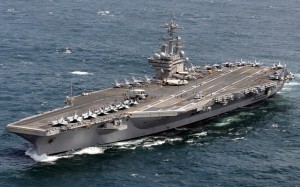 Currently in the Mediterranean: the USS George H.W. Bush (CVN-77)

Will Germany lose face?
For Germany, this crisis is a moment of truth. In January, the President of Germany Joachim Gauck as well as the Defense and the Foreign Ministers established high ambitions for a more proactive German foreign and security policy. The most challenging issue is now, if Germany can deliver, that the stated new ambitions (at least partially) meet with reality. Foreign minister Steinmeier’s negotiation efforts in Kiev were a sufficient try to meet the ambitions; however, more has not yet been delivered.

By the way, where is Angela Merkel? Expressing “deep concern” on the phone to Putin will not have any impact. Given the world gets nothing else from Berlin but words, Germany risks losing its face once again. Hence, Germany should be one of the leading nations in creating a response by NATO to Russia’s aggression; including my proposed Bosporus blockade.

Russia is not the worst threat to NATO
Since 1992, NATO has been engaged in out-of-area and combat missions. This era was about to end anyway through the lack of political will, resources, and money. However, through Ukraine, NATO’s focus and relevance have settled back in Europe. We do not need NATO in Asia or Sub-Sahara Africa.

Instead, we are our worst own enemy. In principle, things look quite well: All NATO allies together remain superior to the rest of the world – economically, technologically, militarily, soft power-wise. In practice, the West’s performance has been very poor. In Syria, Russia, China, Iran, and Assad have very successfully played cats and dogs with the West – resulting in the supposedly-impossible declared survival of Assad’s regime. Even worse, Americans and Europeans let it happen that they became victims of Putin’s divide and rule game, under use of the chess pawn Edward Snowden. However, NATO states could succeed together in Ukraine and elsewhere, but this depends on strategic foresight and – most important – on political will.

Despite all the criticism, the Alliance continued to exist and through Russia’s invasion of Ukraine, it will continue to do so. However, to make a difference, Western governments, in particular the US and Germany, need to wake up and start doing realpolitik.

Felix F. Seidler is a fellow at the Institute for Security Policy, University of Kiel, Germany and runs the site Seidlers Sicherheitspolitik. This article was published there at first