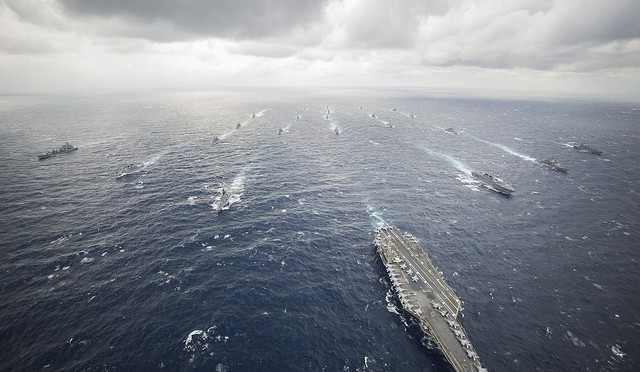 Welcome back to another edition of the Members’ Roundup where we disseminate to you, the great work that CIMSECians have had published elsewhere. We have a variety of topics presented this week, ranging from the Eurozone financial crisis to Russia’s new aircraft carrier. Of note for this week’s edition we would like to welcome one of CIMSEC’s newest members: Milosz Reterski.
In an article for Jane’s, Milosz discusses the vulnerabilities of geonavigation systems such as GPS and GLONASS. Miniaturization and affordability of high-end electronics are putting GNSS  disruption capabilities into the hands of non-state actors—organized criminal groups and insurgents. Despite the introduction of new systems such as eLoran and atomic clocks to harden GNSS, future attacks will be mobile and deniable, and will “swarm” to create frequent degradations in systems that may then lead to permanent damage. Jane’s full content is through subscription only. Otherwise you can request for an instruction through this link.

In the news this week it was reported that Russia is looking at building a new aircraft carrier. Zachary Keck, of The National Interest,  writes this has been confirmed by the head of the Russian Navy. Currently, the Russian Navy only operates a single carrier (pictured below) that was launched in 1985 under the Soviet Union. In the past decade Russia has undertaken a massive program of military modernisation and this announcement will certainly assist in achieving this goal. You can read more on Zachary’s article here.

Over at War is Boring, Kyle Mizokami writes that North Korea may have a significantly high number of nuclear weapons – far more than was previously believed. This report is based on information provided by a former State Department official and it always difficult to accurately assess the true state of the Hermit Kingdom’s nuclear arsenal. At the very minimum, the report represents a road map to what North Korea wants and, if true, has dire consequences for the strategic balance in the region. You can access Kyle’s article here.

Annapolis-based CIMSECian, David Wise, shares with us an article featured on the American Institute for Contemporary German Studies’ website. It deals primarily with the financial and debt crisis in the Eurozone. For the maritime security junkies amongst our readership, David does conclude with how  this could have an effect on the positioning of the Russian fleet. You can access his article here.

On The National Interest’s website, Robert Farley provides a 5-step guide to building a world-class navy. Requirements of a blue-water have come a long way from the days of establishing coal stations on the far side of the world, but much of the logic remains the same. The basic requirements, according to Farley, are: undersea warfare, logistics, air assets, strike capability, and experience.

Over at Signal Magazine, James Stavridis of the Fletcher Law School, shares some thoughts on the Navy’s newest ‘innovation’ department. Under the official title of ‘Task Force Innovation’, Stavridis raises some poignant questions about who should fill the billets. Should it be personnel already screened for promotion? He also suggests that whoever is involved should fight to be heard by the Secretary. You can access the article here.