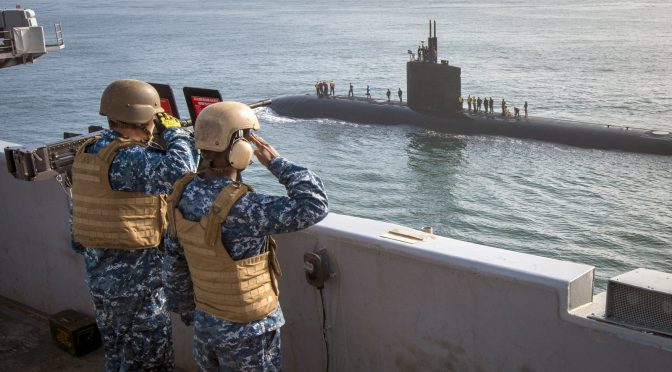 On December 25, 1991, following a year and a half breakup of Soviet states, the flag of the Soviet Union was lowered at the Kremlin for the last time and the flag of the Russian Federation was raised. The next day, the Supreme Soviet voted the Soviet Union out of existence. It was a great victory for the United States and what was dubbed the “First World.” They were victorious in the Cold War, a different kind of war, but a war nonetheless. A war between east and west; a war between communism and capitalism; a war fought using all elements of national power – diplomatic, intelligence, military, and economic – which never erupted into combat between the major powers of NATO and the Warsaw Pact.

Though the war did not involve combat, discussions of conflicts such as Korea and Vietnam aside, the U.S. military was in a near constant state of preparing for the Soviets to push through the Fulda Gap and for a great naval battle in the Norwegian Sea.

But suddenly, the adversary was gone. For nearly five decades the Soviet Union provided focus and direction for what to buy, how to train, and what to study. What now? In 1991, China was not the military power of today and the idea of a Global War on Terrorism couldn’t have been further from mainstream military thought. A look at the 1991 U.S. National Military Strategy makes only generic mentioning of terrorism and shows an isolationist view of China:

“China, like the Soviet Union, poses a complex challenge as it proceeds inexorably toward major systemic change. China’s inward focus and struggle to achieve stability will not preclude increasing interaction with its neighbors as trade and technology advance. Consultations and contact with China will be central features of our policy, lest we intensify the isolation that shields repression.”

The potential threat of China and the actual threat of terrorism did not reveal themselves in force until the early 2000s. The 1990s were a sort of rudderless decade for the U.S. military. With no major perceived enemy to fight, budget cuts commenced. Military spending in the 1990s quickly dropped by a third of its Cold War levels. Intervention in failing or failed states was the name of the game, and American technological superiority, specifically airpower, was the weapon of choice in places such as Iraq, Bosnia, and Serbia.

The Navy found itself without an enemy to confront at sea and with a rapidly shrinking budget. Control of sea lines of communication became assumed and the Navy gradually disarmed itself for fighting a major sea battle in the 1990s through decisions like discontinuing the UGM-84A submarine launched Harpoon anti-ship missile and converting remaining R/UGM-109B Tomahawk anti-ship missiles (TASM) into the Tomahawk land-attack missile (TLAM) R/UGM-109C. The last combatant commissioned equipped with anti-ship missiles was the USS PORTER (DDG 78) in1999.

Idle hands may be the devil’s workshop, but an idle Navy surely is the bureaucrat’s and the administrator’s. Without war or the real risk of war, Navy culture shifted. Instead of warriors patrolling the oceans and maintaining freedom of the seas from the Soviet Navy, it became about management and process improvement. The MBA became the graduate degree of choice and process improvement models such as Deming’s Total Quality Management – rebranded as Total Quality Leadership of course – became the norm.

Admiral James Stavridis had command of the USS BARRY (DDG 52) from 1993 to 1995. He maintained a diary while in command which was published as Destroyer Captain: Lessons of a First Command. Within it he makes some very astute observations of the Navy of the 1990s:

“[W]e have become a navy that specializes in safety, communicating, inspecting, engineering, administering, retaining, and counseling. There is too little emphasis on shiphandling, warfighting, battle repairing, and leading…As an example of how we are a bit out of whack is that if I charted my personal time, I suspect I spend virtually my entire day working the first list and precious little devoted to the latter…If I completely reversed my priorities – and focused exclusively on shiphandling and warfighting, I would be in some danger of being relieved for cause within ninety days…But in some not-too-far-distant decade, I think ships will be hit by cruise missiles, they will sink, men and women will die bad deaths. And hard questions will be asked about the Navy of the 1990s and its priorities and beliefs.”

Admiral Stavridis tells a grim but honest tale of the culture of the Navy in the 1990s, but is it a really a story of the past or is it a story of what has continued to this day? If you compared the Navy of 1995 and the one of today, what cultural differences would you see? Have we turned the tide and placed a focus back on mastering our trade of warfighting? The recent establishment of the Naval Surface and Mine Warfighting Development Center (NWMWDC) and Undersea Warfighting Development Center (UWDC) in 2015 is a positive start. Is attending the War College viewed as career enhancing? Recent discussions with officers indicate it may be currently viewed as not career hindering at the least. What is truly viewed as more important today: understanding tactical employment of a ship, fleet, or nation, or efficiently managing a major maintenance availability and developing and executing a shipboard training plan?

Yes, management of programs is a skill needed in any organization, especially in one as complex as the Navy and as unforgiving as life onboard a ship. But does it define that organization, is it what that organization’s culture is centered around, and can someone survive and even succeed in that organization simply being a manager and administrator instead of a leader and a warfighter? These are simple yet hard questions which must be asked in order to heed Admiral Stavridis’s warning of the Navy’s priorities and beliefs from the 1990s which have continued to today.

Harkening back to another famous admiral, Arleigh Burke, may help with some simple guidance from his Destroyer Squadron 23 Doctrine in World War II. These tenets (paraphrased for modernity) were the most basic guidance to his Commanding Officers while he was Commodore:

Simple yet powerful tenets which serve to maintain the focus where it belongs, ensuring our ships and sailors are ready to sail into harm’s way to take the fight to the enemy. It becomes easy to be distracted by inspections, paperwork, and watchbill management. Items which are easier to audit and assess tend to get the energy and attention over warfighting effectiveness and combat readiness. Potentially at great peril during the next war at sea.

One thought on “Management and Process Improvement: The Navy of the 1990s and Today”