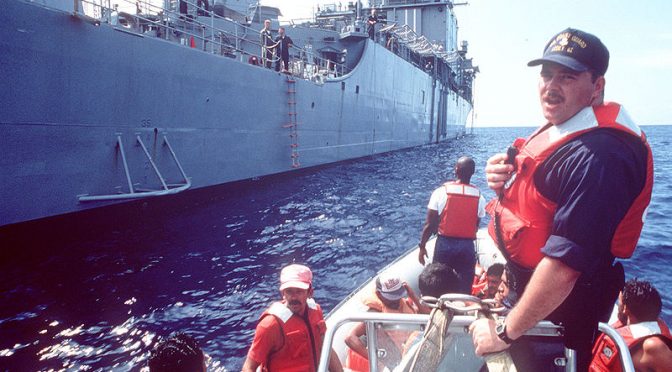 By Pete Spahn and Matt McLaughlin

The CNO’s “Design for Maintaining Maritime Superiority” rightly highlights a return to great power competition on the seas and the need for blue water combat power. While this assessment is accurate, it is also a fact that Phase Zero operations continue unabated, as the United States Navy and its partners shape the environment for whatever comes next. The international community continues to create and enforce economic sanctions on rogue states; U.S. and coalition partners continue to patrol for pirates and smugglers in the Arabian Sea and Gulf of Aden; NATO continues to deter and repatriate Mediterranean migrants.

It is in this context that Identity Activities are an important advantage in the maritime domain. The CNO’s design notes the influence of pervasive connectivity to information – this allows our asymmetric adversaries to coordinate despite loose, diffuse networks. But we can turn such connectivity to our own asymmetric advantage as well, thanks largely to biometrics, data analysis, and global networks. The result: If we find you, we will know who you are.

Understanding identity is a decision-support tool. Since decisions must be made across the Range of Military Operations, from Phase 0 to Phase 3 and beyond, identity is applicable anywhere. In security cooperation missions, for example, identity tools may help the host nation maintain rule of law by identifying criminals. Those same tools may help with identifying insurgents or unmarked troops during hostilities. And during reconstruction and stability operations, Identity Activities can help to establish proper governance and a safe and secure environment with minimal fraud or crime.

According to Joint Doctrine Note 2-16, Identity Activities are “a collection of functions and actions that appropriately recognize and differentiate one entity from another to support decision making.” They may accurately deconflict, link, or consolidate identities; detect shared characteristics of a group; characterize identities to assess levels of threat or trust; or develop or manage identity information.

Identity is derived from a variety of sources: biometric, biographic, documentation, and others. Much of the work is done unseen by the Intelligence Community. At the tactical level, what Sailors and Marines see most directly is an individual’s physical characteristics and, often, documents. Biometrics can help to determine if documents are genuine or fraudulent. When converted to digital files via electronic enrollment, biometrics can also be compared with U.S. watchlists and databases. This will show if the individual has been previously encountered by the armed forces or law enforcement of the U.S. or certain partners. The context of those past encounters will help determine the next course of action.

Migrant interdiction is unfortunately a growth industry, with instability on the Mediterranean’s southern coast, both sides of the Gulf of Aden, and parts of the Caribbean, just to name a few. Tracking the identities of such migrants serves two main purposes: following the flow of displaced persons, and screening displaced populations for known and suspected terrorists and criminals. With some regularity, the U.S. Coast Guard, operating in the Caribbean, biometrically identifies individuals at sea with outstanding warrants in the United States. The Coast Guard can refer them to the proper authorities before these suspects reach U.S. shores on their own. The potential for European navies and coast guards to do the same in the Med – but with potentially far more threatening subjects in the post-ISIS diaspora – is clear.

Maritime security is a longstanding mission that will continue as long as the sea is a pathway for illicit activity. Combined Maritime Forces in the Middle East and the U.S. Coast Guard in the Western Hemisphere both frequently seize large quantities of drugs and – especially near Yemen in recent years – weapons. Ascertaining the identities of the individuals aboard helps crack open the shadowy networks operating and funding their operations. At the same time, it also helps differentiate between guilty ringleaders and plausibly innocent crewmembers that have no knowledge of their cargo. But if the same supposedly ignorant mariner keeps appearing on unsavory vessels again and again, knowledge of his past activities would permit a reevaluation of that benign assessment.

Looking ahead, applying identity to maritime hybrid actors puts it in the service of the great power competition described by the CNO without actually coming to blows at sea. While terrorists and criminals try to remain anonymous as a means of self-protection, hybrid actors use anonymity to provide their state sponsor with deniability. While open source information on ship registration and vessel movements can often poke holes in states’ denials, knowing individual identity – of ship captains, for instance – adds another arrow to our intelligence quiver. The DoD’s 2017 report to Congress on Chinese military power specifically called out the role of the China’s Maritime Militia (CMM), which is vigorously expanding its operations in the South China Sea. Ostensibly fishing boats, these blue-hulled vessels  have habits of finding their way to contested locations. They are the linchpin of a Chinese hybrid strategy of asserting dominance in Southeast Asian waters. Identity Activities can help us know the provenance of these militia vessels, and perhaps offer a tool in the U.S. strategy to counter their influence.

Libya presents another opportunity for Identity Activities to prove useful in the maritime sphere. Libya has two governments, only one of which is internationally recognized – but both are attempting to assert control over Libyan waters (neither very professionally). Just like in the South China Sea, using all-source intelligence to track both vessels and the personnel operating them will help operators sort through which vessels belong to which rival, or are simply third-party pirates taking advantage of disorder.

The Navy and Intelligence Community are already very good at tracking suspicious vessels and monitoring traffic. Gathering information on individuals, biometrics in particular, is a less certain proposition. Warships’ commanding officers are reluctant to have their boarding parties spend time conducting interviews and biometric enrollments aboard overcrowded refugee boats which already have water up to the gunwales before their Sailors even step aboard. The vessel’s master, and perhaps a few others may be enrolled, but likely not an entire boatload of dozens of people. The strategic reward – an expanded database and analytical opportunities – is not typically perceived as worth the tactical risks.

The technology exists to change this. There is no single best solution, but it is easy to imagine an aircraft – as small as a hand-launched quadcopter or as large as a P-8 – passing over an open-topped boat with a high-resolution camera that takes images of its occupants’ faces. A nearby ship, acting as data node, could then interface with the global data architecture that already exists for U.S. biometrics and look for face matches. Before even putting its boat in the water, the ship’s boarding party would know if any persons of interest were sighted aboard the vessel. The boarding party would still be necessary to review identity documents or perform other biometric enrollments, such as fingerprint, but some of the initial trepidation before visiting a vessel of unknowns would be dispelled.

The future of maritime operations is not an “either/or” scenario – peer competition or constabulary maritime security – but a “both/and” situation requiring investment and training at both ends. Identity Activities offer a means of enhancing our effectiveness at the low end and perhaps reducing tensions as we approach the high end. Although the U.S. Navy, Coast Guard, and partners can fully implement it today, it will be made more effective through the fusion of multiple sensing and data transmission technologies. The end result will be greater confidence in the identities of those we encounter at sea, more assured decision making, and enhanced security on the global commons.

Pete Spahn is an Intelligence Analyst at the Defense Forensics and Biometrics Agency, an Army field operating agency, and a retired Chief Cryptologist with experience in collections and analysis around the globe.

Matt McLaughlin, an employee of Booz Allen Hamilton, provides strategic communications support to the Defense Forensics and Biometrics Agency and is a Lieutenant Commander in the Navy Reserve.

Their opinions are their own and do not represent the Departments of the Army, Navy, or Defense.

Featured Image: Between Cuba and the Florida Keys (Sept. 19, 1994)– Coast Guardsman, BM2 John Greenwell, from LEDET 8I (Law Enforcement Detachment) transport cuban migrants to a navy ship during Operation Able Vigil. Operation Able Vigil got underway in mid-August when the number of Cuban rafters rescued in the Florida straits skyrocketed above the month of June record of 1,173 to 2,607 in a single week of August. (USCG photo by PA1 Don Wagner)

One thought on “Leveraging Identity Activities in the Maritime Domain”