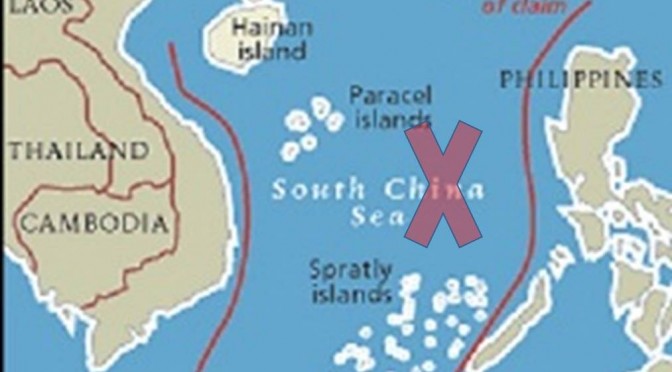 Submitted for your consideration (pretend this is a Rod Serling sounding voice).  Imagine that the United States diplomatic corps starting doing the sort of thing all of these less-than-cooperative states like China, Russia, Iran, and Daesh  (the Islamic State) have been doing.  Imagine calling things by a name that suits our purposes, even if it is different than what is on a map.   I propose we quit calling the body of water that is surrounded on most of its many sides by Vietnam, Thailand, the Philippines, Indonesia, Singapore, Borneo, and Malaysia by another name other the South China Sea.   This was the name was given to it by Europeans, the Chinese simply calling it the “south sea” for most of their own history.   I propose instead we call it the Indochina Sea.  Period.

Why?  Simple—it seems the People’s Republic of China has decided to appeal to a sort of lowest common denominator approach in their neo-maritime imperialist venture.  They have claimed much of the Indochina Sea according to a policy known as the “nine-dash line”—basically using the rationale that it has “our” name on it so it is ours.  What is more fascinating is how effective the Chinese have been in selling their rationale to different audiences, many of them poorly informed about the history and geography of this vital region. In short,  the first purpose in such a re-naming is to try to educate a bit, but educate to suit the purposes of the United States government as it continues in its job of trying to maintain the current international maritime order, which has worked quite well since the UN was created almost 70 years ago—the Cold War notwithstanding.

There is plenty of precedent for the United States (and frankly its many allies) to do this.  In fact, we did it back in 1990.   That was the year that Saddam Hussein invaded and conquered the independent sovereign nation of Kuwait.  Some of you know it as Gulf War I, although historians like the humble author consider it Gulf War II, since the Iran-Iraq War  was really the first of the modern Gulf Wars.   It involved the United States in its closing phases when we conducted operations Earnest Will and Praying Mantis in order to protect Gulf shipping.  But which Gulf?  You mean the Persian Gulf?  Well…that was a bit of a problem.  Our Arab allies in 1990 such as Saudi Arabia, Egypt and Syria (yes folks, Syria), found Americans’ use of the term “Persian Gulf” offensive because none of them liked Iran (a.k.a. Persia) and—presto chango—it became the Arabian Gulf in all formal diplomatic and military channels ever since.  Seriously, check it out on the internet if you dare.   Of course changing South China Sea to Indochina Sea would probably irritate the Chinese as much as it might make our Southeast Asian partners happy, but I am sure the Iranians were none too pleased either when we renamed “their” body of water.  The point is, there is precedence and two can play this game.

“Oh those Americans, they are so obnoxious,” one might think when hearing this proposal.  If however one wants an example of the forbearance and moderation of Americans one need only look in their own back yard, where sits the Gulf of Mexico.   They could have renamed it the Gulf the United States or Florida, but no, they (we) did not.  Maybe the fact that Mexico has not claimed all of the Gulf of Mexico to some five-dash line or something helps explain why it gets to keep its name for the geography books and in diplomatic and military language. 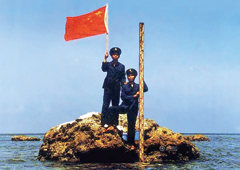 Names mean things – China certainly sees it that way, so should we.  Why continue to give her a stick, albeit a rhetorical stick, that she can hit us, her neighbors, and the international community with?  We can and should start simple—at least inside our government and the Department of Defense (DoD).   The essence of information-politics (as opposed to information warfare) as well as strategic communications is to begin to fight back in the war of words in a meaningful, often incremental way.   As long as we are at it, we might label this initiative information diplomacy and, just for giggles, have it come out of the Department of State rather than big, bad DoD.  Sometimes doing something silly can show someone else just how silly they are acting.   A lesson for China perhaps?

John T. Kuehn is the General William Stofft Professor of Military History and has served on the faculty of the U.S. Army Command and General Staff College since July 2000, retiring from the naval service in 2004.  He earned a Ph.D. in History from Kansas State University in 2007.   He is the author of Agents of Innovation (2008) and co-authored Eyewitness Pacific Theater (2008) with D.M. Giangreco, an a Military History of Japan (2014).  He was awarded a Moncado Prize from the Society for Military History in 2011 for “The U.S. Navy General Board and Naval Arms Limitation: 1922-1937.”  He is also an adjunct professor for the Naval War College Fleet Seminar Program and with the Military History Masters Program at Norwich University.  A former naval aviator (flying in both EP-3 and ES-3 aircraft), he has completed numerous cruises aboard four different aircraft carriers.  He flew reconnaissance and combat missions during the last decade of the Cold War, the First Gulf War (Desert Storm), Iraq and the Persian Gulf (Southern Watch), and the Balkans (Deliberate Force over Bosnia).   His most recent book, also published by Praeger, is entitled Napoleonic Warfare: The Operational Art of the Great Campaigns.