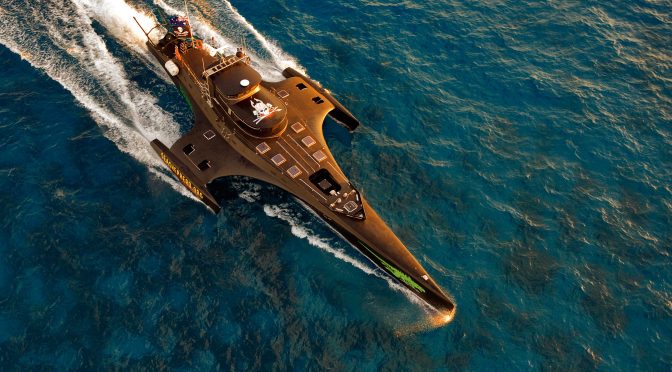 A recent pair of dueling articles on CIMSEC sparked a firestorm of debate. The point of contention: does the Sea Shepherd Conservation Society’s (SSCS) fleet of whaler-chasing ships constituted a navy? The conversation was lively, informed, and freewheeling, bouncing from historical examples of British privateers to modern day terrorists in a bid to pin down a surprisingly elusive understanding of a navy’s central organizing principle. Interspersed throughout this debate is a conversation on legitimacy and how it relates to defining a navy. Legitimacy touches on nearly every component of the arguments put forth by both the Affirmative and Negative articles. It is my belief that the resolution to this debate lies, in large part, on how we interpret such a loaded word.

Legitimacy and the State

When we are talking about legitimacy in the realm of politics and violence, the most fundamental question in international relations is who has the monopoly over the legitimate use of force (a la Max Weber). In the Westphalian system (which, despite news of its untimely demise, is still very much in force), only the state has the right to exercise violence. Legitimacy, violence, and the state are inexorably intertwined. And, as the Negative article points out, violence is truly at the center of this debate. Navies fight; an organization that is not coercive in nature could not even make the prima facie case for being a navy.

As a consequence of this nearly 400 year old understanding of sovereign legitimacy, very few would argue that a non-state body has the legitimacy to exercise violence. Even the nations that allow Sea Shepherd to operate from their ports, as the Affirmative article notes does happen, would never permit the organization to roguishly harass, ram, or board ships in their territorial waters. In the more extreme instances where a state authorizes Sea Shepherd’s involvement in kinetic maritime security operations (as detailed in the comments by Captain Paul Watson, ostensibly the actual founder of Sea Shepherd), the very sanctioning of the use of violence by the state reinforces the argument that only the state has the authority to legitimately employ force.

The associated argument that some states do not de jure recognize countries like Israel or Taiwan, and thus defining a navy need not be tied to a nation’s legitimacy, is creative but erroneous. Such a claim obfuscates the reality of their universal de facto recognition as sovereign states around the world, despite occasional political fictions maintained for domestic expediency.

More to the point, legitimacy is granted as much (if not more) by domestic consent than external validation. Under this interpretation, we could more reasonably debate the merits of regarding something like Hezbollah’s maritime components as a Navy, since the group has some internal validity and some external recognition. Of course, labels like paramilitary or terrorist organization are more appropriate even in that instance, as the group’s position as a sub-state entity clearly invalidates the notion that it has a monopoly over the legitimate use of force.

This question of legitimacy also bears on the historical point brought up by the Affirmative article of eighteenth century privateers. Putting aside that contemporary, professional navies would have been unlikely to regard licensed privateers as peers (despite the quite genuine might of the latter), the fundamental point that the sovereign granted letters of marque to deputize privateer fleets again underscores the notion that legitimacy for violence stems from the authority of the state.

This last point informs an argument in the Negative article that a military is differentiated from non-state groups by the scale of the force it can exert. A navy, it argues, has warfighting capacity that exceeds the capability or intention of a non-state group like Sea Shepherd. Such an argument is semiotic, a way of understanding something through comparison to known others. The problem, however, is that a semiotic (and not theoretical) definition is vulnerable to false equivalencies. If a privateer fleet rivaled the local power of the Royal Navy, as some pirate bands did in the Golden Age of Piracy, a semiotic definition would backfire and elevate them to the status of a navy. Today, if a non-state actor (say a cartel) had the power to topple a small Caribbean nation, would the cartel be a military? Using the monopoly over the legitimate use of violence as our yardstick, the answer is clearly no. This approach negates the need entirely to define navies by their fighting capacity (something small states will be happy to hear).

There are, of course, other important questions raised in this debate. Most centrally, why does a fleet have to be a navy? If we already have a word to describe a collection of ships, is it valuable to take a concept like navy (however nebulous, at least you ‘know it when you see it’) and widen its use so far you risk entirely deflating it? The answer may well be yes, but it needs defending. Lexicons, even if somewhat amorphous, have inherent value. The Affirmative’s argument about a post ­Westphalian system is an admirable attempt to define the need for that new lexicon, though one I find highly premature (and I staked a dissertation on elevating the significance of non­state actors).

Finally, if (as I have argued) Sea Shepherd cannot be regarded as a navy because its use of violence is either illegitimate or state­sanctioned, a follow on question emerges: is Sea Shepherd piracy? The answer, like the former debate, is far from clear. The United Nations Convention on the Law of the Sea (UNCLOS) defines piracy as “any illegal acts of violence or detention, or any act of depredation, committed for private ends by the crew or the passengers of a private ship or a private aircraft…” UNCLOS has, in the past, come under fire for separating piracy and armed robbery at sea by drawing an artificial distinction between acts of predation within or without territorial seas. As a consequence, many bodies (including the UN Security Council) prefer some version of the International Maritime Bureau’s definition, which is less territorially focused and more functional. According to the IMB, piracy is “an act of boarding or attempting to board any ship with the apparent intent to commit theft or any other crime and with the apparent intent or capability to use force in the furtherance of that act.”

The problem, here, with either of these two most common definitions (legal or de facto) is that Sea Shepherd clearly employs coercion or force for political ends, not personal or private ends. Political ends are not a component of these definitions. One option, of course, is to argue that there exists an even greater need for a change in the lexicon on piracy than on navies.

Pirates the world over operate for a mixture of both private economic and broader political objectives. Pirates off Nigeria steal oil not only for financial gain, but to help fund political agendas as well (piracy typically peaks near elections in Nigeria). Pirates in Somalia hijack ships for astounding ransoms. They also cloak themselves in narratives of defending territorial waters against the predations of multinationals depleting fishing stocks and dumping toxic chemicals. Even the privateers of old, who often morphed into pirates themselves, attempted to form politically independent units in the Bahamas or Madagascar and fought in part to defend this short lived independence from the British or French monarchies. Jacobite-leaning pirates in the Caribbean even considered trying to help reinstate the Stuart line.

Instead of revolutionizing the use of the term navy, therefore, might we instead simply apply the term piracy as it conforms to its historical character, inclusive of both private and political ends?

Sea Shepherd’s fleet does engage in maritime violence and coercive acts. This was a prima facie requirement for even debating its eligibility as a navy. As Captain Watson noted in the comments of the original article, “Since Sea Shepherd was established in 1977 we have rammed more ships, sunk more ships, boarded more ships and blockaded more harbours than most of the world’s Navies.”

Without commenting on the ethics of Sea Shepherd, the organization’s coercive actions are clearly illegitimate in the current international system. Consequently, Sea Shepherd might fit far better into an updated definition of piracy than of navy. Such a definition, which conforms to piracy as it has been practiced for centuries, recognizes not only the pursuit of private wealth, but also the role of pirates’ political agendas—even if those pirates are fighting for ocean conservation.

8 thoughts on “Legitimacy at Sea: Is Sea Shepherd a Navy or Piracy?”