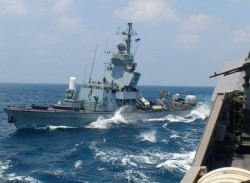 As fighting continues Friday between Israel and Hamas, the region braces for an expanded Israel Defense Force (IDF) incursion into the Gaza Strip – a possibility indicated by the government approval of a mobilization of up of 30,000 reservists.  Such a move would consist mostly of air and ground forces, but the Israeli Navy would also have a role to play.

The bulk of the Israeli Navy consists of these missile boats and patrol craft, plus a handful of more-capable corvettes and subs.  Missile boats have already shelled (and perhaps struck with missiles) Hamas security positions along the coast, and the Navy continues to enforce its blockade of the Strip.  As Dr. Robert Farley and Galrahn, a pair of prominent naval bloggers (see our @CIMSEC twitter stream conversation), say naval options during this and expanded Israeli operations will mostly be confined to further shore bombardment and interdiction, along with ISR and effective surgicial strikes ashore.  Martin Skold, another CIMSEC member, notes that the normal missile load-out of Israel’s naval platforms limits the frequency of such strikes, especially when options such as the F-16 are readily available.  On the flip side, Israeli naval vessels may tempt Hamas as targets – especially as with the case of the Hezbollah attack on the INS Hanit in 2006 if they let their guard down.  It will be interesting to see if Hamas has the capability to attempt a similar strike.

Other scenarios tossed about for expanded fighting in the region include Hezbollah in Lebanon, and Egypt.  The latter would present the greatest naval challenges with 6 American-built frigates, 4 Romeo-class submarines, and roughly 200 other ships and craft.  But as the former showed with the Hanit, one should never count out the damage non-state actors can do to a Navy.