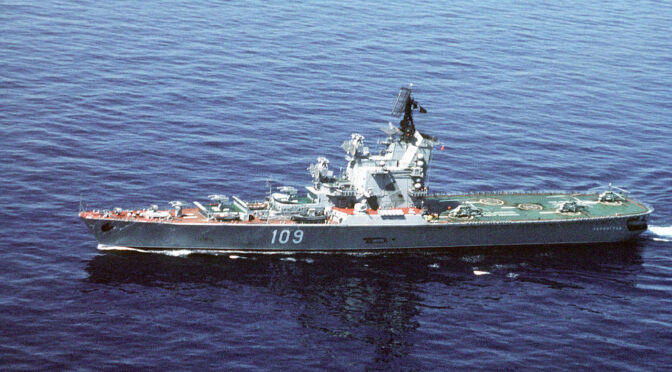 A variety of factors, including the long range capabilities of modern artillery, the evolution of drones and missiles, together with the need for stand-off and distributed lethality, have combined to make space in the world’s navies for a great comeback of helicopter cruisers.

In the mid-part of the Cold War, helicopter cruisers became a quite popular ship design. This trend was less noticeable in the US Navy, which concentrated on full-size carriers during that period, but a few other navies decided to operate such naval vessels. In the 1960’s, the French Navy commissioned the Jeanne d’Arc, the Italian Navy – Andrea Doria, Caio Duilio and Vittorio Veneto, and the Soviet Navy – Moskva and Leningrad. All of these ships were either heavily armed or could easily increase their armament, while also providing relatively large flight decks and hangars. The helicopter cruisers responded to the increasing threat and role of submarines in naval warfare. The air wings on each ship class consisted of four or more ASW helicopters.

The most representative among these designs is the Moskva class helicopter cruiser. Although 12 hulls were originally planned, only two vessels were built. The Moskva class had a length of 189 meters (620 feet) and 19,200 tons full displacement – a bit smaller than a San Antonio-class amphibious warfare ship. The aft hangar and flight deck of the ASW cruiser was designed to carry 18 medium helicopters, such as the Kamov Ka 25 Hormone; its bow and midship section included 2 medium caliber (57mm) guns and 3 missiles launchers for 48 anti-aircraft and 24 anti-submarine missiles.

The helicopter cruisers quickly assumed roles beyond ASW, even as improvements in ship-mounted sonar and the need to operate fixed-wing aircraft curtailed further development of ASW cruisers. Successors of the ships mentioned above were mostly full-length flight deck vessels.

Today, as full-size aircraft carriers are increasingly vulnerable due to long-range and land based anti-ship missiles, the Moskva class design could emerge from the shadow of history. A ship design inspired by this cruiser would have both enough space for stand-off weapons and for an air wing composed of vertical lift drones and helicopters. The promise of greater range artillery, such as high velocity projectile (HVP) ammunition for existing 5” naval guns, could redefine the role of artillery in war at sea. These developments would allow a couple of 5” Mk45 guns to replace standard range anti-ship missiles (like Harpoon or NSM) and to complement anti-aircraft missiles in local defense. In the near future, long range anti-ship missiles will assume the strike and attack roles long held by fixed-wing manned naval aircraft. A design inspired by the Moskva-class could be equipped with 96 VLS cells – or more – that would allow for carrying a mix of at least 32 long range anti-ship missiles and various air defense missiles.

Naturally, the key point of choosing a helicopter carrier is to use helicopters. This proposed solution concentrates on replacing the platform’s original ASW helicopters with a mix of manned airborne early warning and control (AEW&C) heavy helicopters and vertical lift reconnaissance UAVs.

The hangar space would probably need to be divided between a flight deck level hangar for the larger, heavier helicopters and a lower hangar for smaller drones. This arrangement might limit the AEW&C helicopters to only four, but this would nevertheless equal the number of E2D Hawkeyes frequently embarked on a full-size aircraft carrier. Moreover, one should not forget the potential for tiltrotor manned aircraft for AEW&C missions, which would effect better range and operational time than helicopters. Projects like DARPA’s Tern promise compact reconnaissance UAVs that have the range of a fixed-wing UAV but can still take off and land like a helicopter.

The vessel’s strong armament and the vertical lift air wing would make it a self-dependent unit, harkening back to the reconnaissance-strike roots of early carrier-based aircraft. In this context, a vessel inspired by the Moskva-class helicopter carrier and upgraded with stealth lines seems to be a ready solution for distributed lethality and stand-off tactics.

A wartime task group would include two of the proposed helicopter carriers and at least 3 ASW frigates, which also could provide additional long range anti-ship missiles, extra naval guns, and organic ASW helicopters.

The areas where such task groups would be the most effective include waters of the South-West Pacific Ocean and the triangle of the Norwegian Sea, the Greenland Sea and the Barents Sea. These waters are key zones for global business and security during peacetime while also being characterized by great air- and land-based missile threat during conflict. A potential enemy has high anti-access/area denial (A2AD) capabilities in these areas, which makes traditional air-sea battle tactics too risky. The proposed helicopter cruiser task groups could execute distributed lethality tactics, as they would be less expensive and more numerous than the carrier task groups.

The main aim of the proposed task groups is to create their own sea denial capabilities, in other words, to prevent enemies’ activity in the circle of about 200 nautical mile (Nm) against the air targets and about 500 Nm against the surface targets from the task group. The air wing of the new Moskva-class should be able to provide long-range, over-the-horizon reconnaissance and closer early warning of both surface and air threats.

The AEW&C helicopters carried by the proposed task groups would allow the ships in the task group to turn off their ships’ radars and minimize their electro-magnetic signature. Because of their self-dependence, these ships could easily employ lone wolf tactics, for example sortieing out against enemy task groups. They could also be used for taking control of choke points, or they could prevent enemy forces from landing on allied islands – especially with submarine support.

Many assert that submarines are the right tool to operate near the enemy coast during hostilities – for example, within the first island chain. The problem, however, is that submarines remain vulnerable to enemy ASW forces. Deploying the proposed task group behind own submarines, in a supporting role, would allow the destruction of enemy ASW surface vessels before they could fulfill their mission. Naturally, in more favorable and less threatening circumstances the proposed helicopter cruisers could join a carrier strike group or support forward-deployed Marine Corps operations. Conversely, if full-size carriers are in high demand within a given theater, these vessels could perform presence operations elsewhere.

The new Moskva-class design provokes reflection about the Zumwalt-class destroyer. If we make the Zumwalt-class a bit bigger and a bit less high tech, we will get a vessel that would be very similar to the proposed helicopter carrier but probably much more cost effective and flexible. In the Cold War there was a plan to create a helicopter destroyer (DDH) as a modified Spruance-class destroyer. The DDH was believed not to cost much more to build than a standard Spruance-class destroyer in the condition of series production – as they say, “steel is cheap and air is free.” It is fair to assume that the cost of the helicopter cruiser in relation to a cruiser (or a big destroyer – the difference between these two types is diminishing) could be attractive today as well.

There is also another naval design close to the helicopter cruiser – a landing platform dock (LPD). Most LPDs have enough space and adequate designs for being equipped in AESA radars, missiles, MCGs, helicopters and UAVs. Naturally, a LPD design would need to be adapted for both speed and hull survivability of DDGs. However, it would be very important to remember that the proposed helicopter cruiser is not an arsenal ship. There must exist a balanced quantity of missiles per warship, adequate to the distributed lethality concept. If naval combat requires more missiles, navies should rather look for new concepts of external floating storage rather than concentrating great amounts of scarce and expensive weapons in a single hull – a valuable sitting duck.

After WWII there were very few naval battles and very many non-war naval operations which favored vessels with maximal aircraft capability and a lot of cargo-like space. A helicopter cruiser would have these qualities in far greater measure than typical cruisers and destroyers. The key advantage of the proposed helicopter cruiser is the flight deck, which enables at least two helicopters to take off or land at the same time. It would be easy to replace the AEW&C helicopters with other platforms and cargo, supporting special forces, humanitarian assistance, mine countermeasures, ASW, and many other missions. The history of the Jeanne d’Arc helicopter cruiser proves this flexibility well.

A design evolved from the Moskva-class could provide high AAW and ASuW self-sufficiency as well as it could be a very flexible platform for many additional tasks. The key assumption of this concept is to consider the proposed vessel as an expendable destroyer/cruiser rather than a distributed carrier. This is why the term “sea control ship” has not been mentioned above – it is a sea denial ship. In the face of the great missile threat and unmanned revolution the air sea battle concept needs to evolve and incorporate new solutions. In spite of strong criticism, full size carriers still provide capabilities and inherent flexibility that other warships cannot match. By adding the proposed air wing to a DDG or CG, the US Navy might get an additional class of capital ships that could act in parallel to CVNs – making the whole fleet architecture both less vulnerable and more diversified.

Przemysław Ziemacki is a freelancer journalist and photographer from Poland. He currently writes for Polityka, one of the largest Polish weeklies. He previously worked for the local press and has also published in National Geographic Poland. He has a long-standing avocational interest in naval matters; this article is his first foreign publication on the subject.

10 thoughts on “Is the Moskva-class Helicopter Cruiser the Best Naval Design for the Drone Era?”