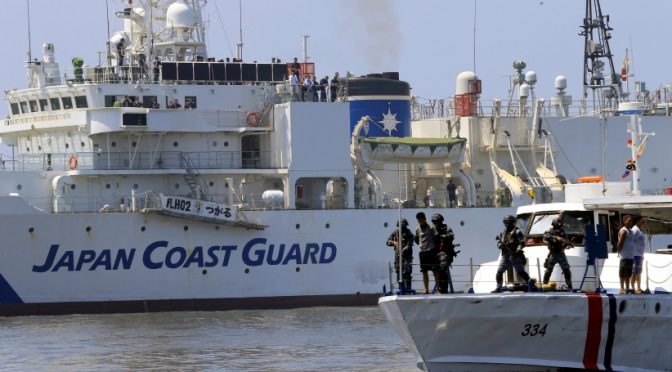 Join the CIMSEC DC Chapter and special guest Lyle Morris of RAND (bio below) on Wednesday, April 19th, for an informal discussion on his recent work in the U.S. Naval War College Review, “Blunt Defenders of Sovereignty: The Rise of Coast Guards in East and Southeast Asia.” For more, check out the TL: DR version at CSIS AMTI.

RSVPs not required but appreciated at director@cimsec.org.

Lyle J. Morris is a policy analyst at the RAND Corporation, where he focuses on security developments in East and Southeast Asia. He has over ten years of experience researching and leading projects on Asia-Pacific security issues and has published recently on the rise of coast guards in East and Southeast Asia, maritime security in the Asia-Pacific, Chinese military modernization, and Chinese engagement in Africa. His articles have appeared in Naval War College Review, Asia Policy, The Diplomat, The National Interest, The China Brief, Aviation Week & Space Technology, Asia Maritime Transparency Initiative (AMTI), Asia Pacific Bulletin, and U.S. News and World Report, among others. Prior to joining RAND, Morris was the 2010-11 Next Generation Fellow at the National Bureau of Asian Research (NBR) and a research intern with the Freeman Chair in China Studies at the Center for Strategic and International Studies (CSIS). From 2004 to 2008, Morris lived in Beijing, China, where he studied Mandarin Chinese at Peking and Tsinghua Universities and later worked at Dentsu Advertising and the China Economist Journal. Morris received his master’s degree in international affairs from the Columbia University School of International and Public Affairs (SIPA), where he was the recipient of the George C. Marshall Prize in Strategic Studies for his paper on China’s experience with confidence-building measures. He holds a certificate in East Asian Studies from Columbia’s Weatherhead East Asian Institute. He received his bachelor’s degree in international business from Western Washington University.

Scott Cheney-Peters is CIMSEC’s Chairman of the Board of Directors.