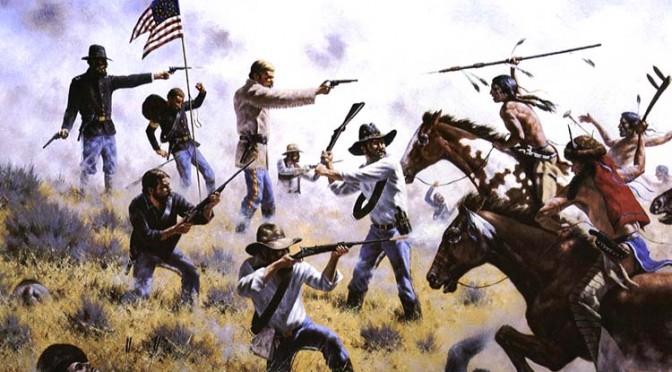 During the winter of 1879, Army officers reported to Chicago to decide whom to blame for the disaster at the Little Bighorn. Ostensibly meeting to clear the name of Major Marcus Reno, the commander of the southern wing of Custer’s Seventh Cavalry during the battle, some of the attendees surely hoped that the Court of Inquiry would prove cathartic and help explain the battle’s tragic outcome. Custer’s defeat during the summer of 1876 had shocked a nation celebrating the centennial of its founding and espousing notions of progress and growth. How could Custer, one of the Army’s ablest tacticians, and his vaunted Seventh Cavalry have been decimated by a coalition of Plains Tribes Indians over the course of one afternoon?

By the Inquiry’s conclusion, the presiding officers had half-heartedly cleared Reno of any wrong-doing during the battle, but did place blame on two others: the dead Custer and the very-much still in use 1872 .45 caliber Springfield carbine. While one could explain away the designs of a purportedly narcissistic and egomaniacal commanding officers, the reported combat malfunctions and slow rate of fire of the Springfield carbine wreaked of bureaucratic inefficiency and government malfeasance. Not only did Custer’s troopers find themselves outnumbered by Sioux warriors, they also claimed to have been outgunned, as several survivors of the battle recounted the prevalence of Winchester repeating rifles among the Sioux. Reading the minutes of the Inquiry, many contemporary observes roundly criticized the United States government and the army for not only allowing soldiers to fight at a technological mismatch, but for also missing the opportunity to revolutionize the mounted force by arming them with faster-firing repeating rifles.

The Springfield carbine/Winchester repeating rifle debate, particularly in the wake of Custer’s defeat at the Little Bighorn, provides a very interesting case study in military innovation. Many present-day scholars still insist that the 1872 board of officers ordered by then-General of the Army William T. Sherman to choose a single small arm for use by the U.S. army missed the mark. The board chose the 1872 Springfield rifle for use in the Army, selecting it over many other experimental and retooled designs then on the market. For the cavalry branch, the board decided upon the same design, just in carbine form, the shortened stock and barrel allowing for easier management on horseback. Interestingly enough, the board had ominous connections with the disaster still four years in the future. General Alfred Terry, later commander of the Department of the Dakotas and overall in charge of the 1876 Centennial Campaign, served as chair of the board; Major Marcus Reno, later besmirched survivor of the Little Bighorn battlefield, represented the cavalry branch.

What many critics of the Springfield carbine and the board overlook is how innovative the board and its selection actually were. New technology aside, the board operated under some guiding notions. First, the War Department wanted to use a single round for all of its weapons, as opposed to the myriad of round sizes and grain weights currently in service. They also hoped to conserve ammunition. Most officers believed that soldiers fired wildly and inaccurately during combat, leading to an inefficient exhaustion of ammunition stores. Enlistment data, presented to the board, showed that uneducated industrial workers and partially-literate foreign immigrants composed the majority of the post-Civil War force. Commanders could not assume that new recruits possessed any experience with firearms. Finally, the transition to conflict on the western frontier necessitated a lengthy supply line. Moving large amounts of specialized parts over long distances in inhospitable terrain and weather to maintain the small arms of a widely scattered force daunted many on the board. The Springfield rifle, and its carbine variant, brought simplicity and durability to the army; as a single-shot breechloader, it addressed the board’s concern with ammunition expenditure, while the .45/70 metallic center fire round provided high muzzle velocity and added range. Granted, the carbine used a smaller .45/55 round, but its internal parts and design mirrored the larger model. By deciding on the Springfield, the War Department modernized and standardized the force, increasing efficiency in arming soldiers, repairing weapons, and supplying units. While not necessarily the “sexy” choice, the selection of the Springfield signaled the genesis of bureaucratic innovation in the U.S. army. The Springfield would remain as the army’s primary small arm until the eve of the Spanish-American War and the adoption of the Krag-Jorgensen Rifle.

Later small arms studies and archaeological evidence also seemed to, if not invalidate, at least weaken the pro-Winchester argument. The United States Military Academy (USMA) commissioned a series of short films during the 1990s that examined small arms throughout military history, eventually devoting an entire forty-five minute film to discuss the debate over the Springfield carbine and the Winchester repeater at the Battle of Little Bighorn. The narrator points out that the Winchester repeater models of the early 1870s suffered from a poor design, the weapon’s internal mechanisms preventing the adoption of a long and powerful round. The Winchester could reach out accurately to 120 yards at best, with little force behind the round after approximately 80 – 100 yards. The Springfield carbine could maintain a steady rate of fire and deliver well placed and effective rounds past 200 yards. The USMA analysis built off of archaeological evidence found during the 1980s and 1990s at the Little Bighorn. Surveys of the battlefield helped to discount the idea that every Sioux warrior fired a Winchester repeater during the battle. Searchers found evidence of forty-three other types of small arms used at the battle, running the gamut from old muzzle-loading muskets to the historically much-ballyhooed Winchesters. They and others advanced the proposition that about a third of all warriors possessed firearms of any kind, further evidence and first person Indian accounts showing that the majority of the Sioux, particularly early in the battle, fought with bows and arrows instead of rifles. Historians also point out the lack of range the Winchesters possessed, as well as the lack of a regimented Indian marksmanship program. Custer’s troopers would have most felt the impact of the repeaters at close range, the short distance limiting the impact of their carbines’ rate of fire and accuracy.

If one cannot fully blame the Springfield carbine for the disaster, can we thus disregard the Battle of the Little Bighorn as a learning point in terms of innovation? No, for it does illustrate a key component of technological innovation that well-meaning theorists and intellectuals often over-look: TRAINING. As stated above, the 1872 small arms selection board used as one of its guiding assumptions that the new recruit would most likely be semi-literate or a non-native English-speaker who would have little to no experience with firearms. This in mind, the board never recommended and the army never explored the idea of an institutionalized recruit training program. The army instead banked on the hope that the gaining regiment or troop would familiarize the recruit with tactical and technical information. This rarely played out in terms favorable for the new trooper. The USMA small arms analysis placed a significant portion of the blame for the Little Bighorn on a perceived lack of discipline and preparedness within Custer’s command. Several Indian accounts from the battle noted that many of the cavalry’s shots travelled over their head, even though the majority of the troopers fired from stationary positions, indicative of poor marksmanship training. At the same time, ammunition expenditure during the battle appears to have been quite high, with numerous officers voicing their concerns about the scarcity of ammunition. Strikingly, most troopers chose to fight dismounted, foregoing mobility over a sense of grounded security. More than likely, this also stemmed from a lack of training, as troopers untaught in how to fight from horseback went to ground in the hopes of placing a semblance of well-aimed fire against their foes. More often than not, this practice eventually led to the routing of dismounted forces by their more mobile and horse-bound Sioux enemy.

My recent participation in a symposium discussing the future of small arms made me realize that the problem of linking training with innovation still exists in some quarters. As we debated what the future force would carry into battle, other scholars and experts repeatedly instructed me to “not worry about training” and to instead focus on capabilities. These maxims stayed with me, particularly as I considered the half-way or deadened innovation of the early 1870s. While the War Department correctly pursued innovations in procurement and sustainment, the lack of other institutional changes prevented them from realizing the fullest potential of their technological advance. A hard look at structures, doctrine, and training prior to Custer entering the valley of the Little Bighorn might have precluded the need to lay blame during the cold Chicago winter of 1879.