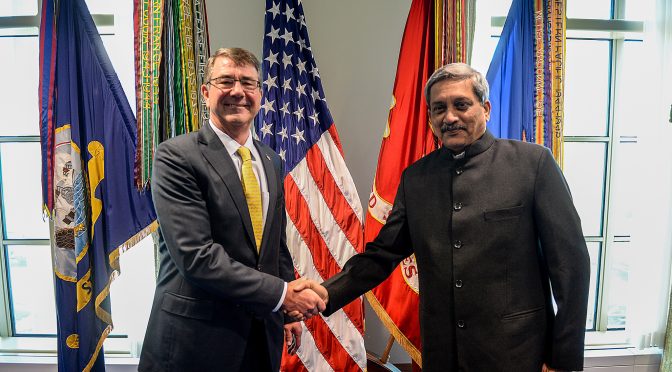 The following article originally featured at the National Maritime Foundation and is republished with the author’s permission. Read it in its original form here.

On 29 August 2016, during the visit of the Indian Defence Minister Manohar Parrikar to Washington DC, India and the United States (U.S.) signed the Logistics Exchange Memorandum of Agreement (LEMOA). Essentially, LEMOA is only a ‘functional’ agreement ‘to account for’ the essential supplies and services that one country would provide (at its port or airport facility) to the visiting military force of the other – an arrangement that the U.S. has made with over a hundred countries worldwide. Nonetheless, the significant symbolic and strategic import of the agreement cannot be ignored. Also, while the proposal was initiated in 2002, it has fructified at a crucial time. Never before in recent history has Asia’s geopolitical and security environment been so tenuous; or the strategic interests of India and the U.S. so convergent. Understandably, therefore, the signing of LEMOA has grabbed much attention, and raised the multitude of questions and speculations. This essay attempts to clarify a few key issues, and appraise LEMOA in terms of its strategic implications.

In the past, India and the U.S. have transacted military logistics, but on an ad hoc basis and largely during combined exercises. LEMOA would change the nature of transactions. Hitherto, each transaction was considered as a separate case and on every occasion, paid for in cash by the side using the supplies or services. LEMOA would entail both sides maintaining a ledger for the transactions, such that much of the debit would be defrayed against the credit, and only the residual balance owing to whichever side would be paid for at the end of the fiscal year. Notably, as a standing agreement, LEMOA is indicative of the expectation on both sides that logistic transactions would increase in the coming years, and expand from combined exercises to coordinated operations.

However, the signing of LEMOA has led to a perception that India has side-stepped “its policy of not entering into a military agreement with any major.” Owing to its civilizational ethos, India’s foreign policy proscribes a ‘military alliance,’ but not a ‘military agreement.’ In the past, India has entered into a plethora of military agreements with major powers on various functional aspects, such as development of defense hardware, combined exercises, and sharing of operational information. Specifically with the U.S., in 2002, India entered into an agreement with the U.S. to provide naval escort to the U.S. high-value ships transiting the Malacca Straits. As another functional agreement, LEMOA represents no departure from India’s enduring policy.

Even under LEMOA, India would be able to exercise its strategic autonomy. The agreement would not restrict India’s strategic options since it is a ‘tier-two’ agreement. This implies that only if and when the Indian government agrees to a U.S. proposal to conduct a combined military exercise or operation (entailing a logistics exchange), will LEMOA come into play. For instance, since the India-U.S. Malabar naval exercise is a standing arrangement approved by the Indian government, LEMOA will apply on all occasions that such exercises are conducted. As another instance, if hypothetically, the U.S. seeks to undertake a coordinated military operation with India to flush out a terrorist group in a neighboring country, based on many factors, India may decide turn down the U.S. proposal, with no obligation to offer the U.S. forces access to Indian logistic facilities. Furthermore, as the Indian Ministry of Defence (MoD) Press Release specifically states, the agreement does not provide for setting up of a U.S. military base on Indian soil.

The above leads to a pertinent question: Does LEMOA give the right to the U.S. and Indian armed forces to use each others’ military bases? According to the Indian MoD Press Release, LEMOA pertains to reciprocal ‘access’ rights to military forces for logistic supplies and services comprising “food, water, billeting, transportation, petroleum, oils, lubricants, clothing, communication services, medical services, storage services, training services, spare-parts and components, repair and maintenance services, calibration services and port services.” Even at present, some of these supplies and services would be available only in the military base of the host country. In the coming years – given the existing trends – when a substantial proportion of Indian military hardware is of U.S. origin, the visiting military force may seek to replenish even ammunition, missiles, and torpedoes from the host country. LEMOA may then become analogous to the reciprocal use of military bases.

The signing of LEMOA has led to apprehensions amongst a few analysts in India that the benefits of the agreement weigh heavily in favor of the U.S.. Such perception may not be true. The US possesses numerous globally-dispersed overseas military bases and access facilities. In an operational contingency, therefore, the U.S. would expect India to provide essential supplies and services to its military forces only if the contingency occurs in geographic proximity of the Indian sub-continent. Such logistics may also be required for an inter-theatre shift of U.S. forces in an emergency – such as the Persian Gulf crises of 1990, when C-141 transport planes transiting from the Philippines to the Gulf were refueled in Indian airfields – but such occasions would be rare. In contrast, India has no overseas military base, and yet its areas of interest are fast expanding much beyond its immediate neighborhood – notably, the Persian Gulf, southern Indian Ocean and the western Pacific – where its  ability to influence events is severely constrained by stretched logistic lines. Access to U.S. military bases in these areas, facilitated by LEMOA, would provide useful strategic alternatives to India.

In sum, therefore, while LEMOA may be a functional agreement meant to facilitate military operations and exercises, it would enhance the strategic options of the involved parties; and thus pose a credible strategic deterrence to actors – both state and non-state – that seek to undermine regional security and stability. However, to address the possibility of its negative perception in terms of India’s ‘policy polarization,’ New Delhi may consider entering into similar agreements with other  major  powers  with  whom  its  strategic  interests  converge.