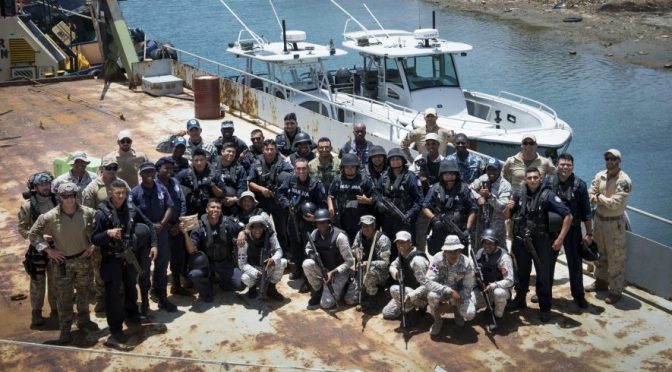 “A good navy is not a provocation of war. It is the surest guaranty of peace”

To become more competitive in the new geopolitical reality the U.S. Navy Chief of Naval Operations can enhance the U.S. Navy’s relationship with the small and medium-sized navies of the “Third Border.” The U.S. Strategy for Engagement in the Caribbean names as the “Third Border” 26 countries that are part of the Great Caribbean Region.

The CNO should include in his working plan a desire to better understand and collaborate with small and medium-sized Navies of nearby democratic countries with the aim of earning bilateral cooperation for USN objectives.

For this the CNO may connect through person-to-person visits and calls to the leaders of these navies to earn a better understanding of how other international naval forces operate and contribute to regional security. This will foster mutual cooperation rather than unilateral activities and goals.

The importance of Professional Military Education (PME) as a multipurpose method to link with small and medium-sized navies can hardly be overstated. Unique institutions like the U.S. Naval War College (USNWC) and Naval Postgraduate School (NPS) are excellent means for fostering mutual understanding between American naval officers and officers from numerous other nations.

The CNO should consider increasing the number of enrolled international naval students from small and medium-sized navies to give them the opportunity to attend these world-class institutions that have longed forged future naval leaders. By opening more seats at these institutions the Navy will earn a great return in terms of international connectivity at strategic, operational, and tactical levels.

Finally, the new CNO should advocate for the United States to ratify the United Nations Convention on the Law of the Sea (UNCLOS). Ratifying UNCLOS would build confidence within the international maritime community, and would strengthen trust and transparency among the private and public sectors and enhance enduring economic ties, among other vital aspects.

Vice Admiral Omar Eduardo Andujar-Zaiter served in the Dominican Republic Navy for 29 years. Ashore, he served as aide to several Chiefs of the Navy; Director of Public Affairs at the Ministry of Defense, as well as for the DRN. At the Naval Academy, he had several assignments including the position of Director, prior to becoming Vice Chief of the Navy in 2002. He has taken specialized courses at the U.S. Naval War College and the Naval Postgraduate School. He retired from the DRN in August 2007, immediately starting his current position as Executive Manager of CIRAMAR Shipyards in the Dominican Republic.